Horse Head Wounds Heal Fast, But They Sure Look Bad

Yesterday, we took Penny to our vet for a little TLC.  My friend and neighbor was kind enough to go with me and take some photos of the big adventure.  Poor Penny.

I count this as the 9th day toward my 100 Day Challenge because it improved my knowledge of horsemanship.  It was like an equine head injury class.  (Plus, the parking was tight and I had to back up the trailer 4-5 times to get out--hauling class!)

First, the head wound.  It had been three days since I found it.  The blood had sealed it together by the time I first saw it, which made it appear better than it was.  In hindsight, I should have soaked it at that point.  Instead, I waited until Sunday...and the thorough soaking & flushing on Monday.  Sunday's effort was with my husband who thought it was too late to stitch and that it was healing fine.  On Monday, I started to smell something--like infection--which is why I started soaking AND flushing it until the skin flap came apart from the forehead and I could get into it and see what was happening.

For the record, my vet said that anytime you wonder if something should be stitched, it probably should.

Penny had two shots of sedation.  After the second, her head dropped nearly to the ground!  Our vet needed to shave all around it. 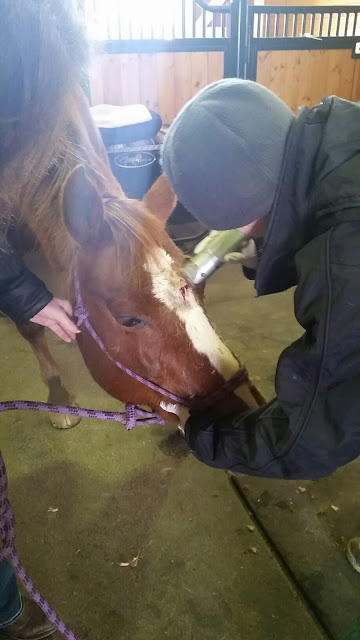 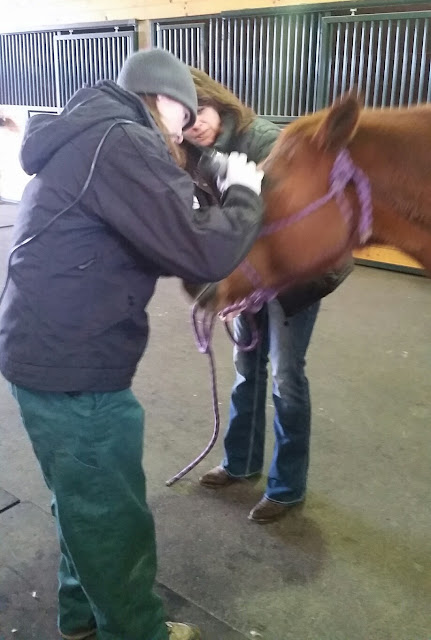 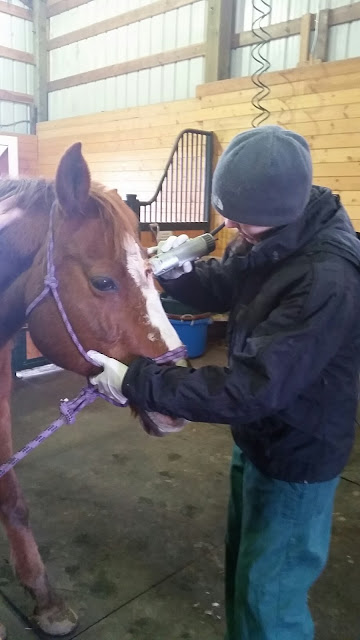 After a good shave, she cleaned the wound--sticking her fingers way down into it and all around.  She really got on it! 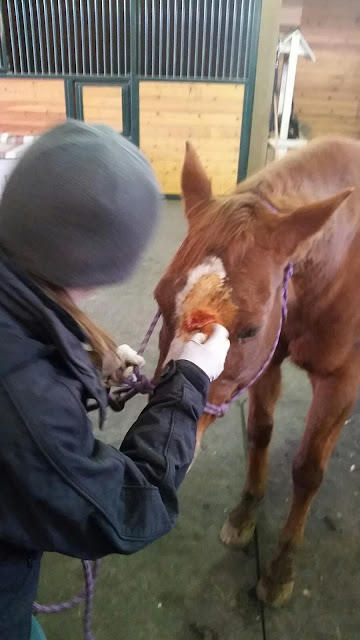 After a good cleaning, she decided to stitch it up.  The cut was a perfect "L" and looked like it was caused by something sharp.  Note to self: find the something sharp! 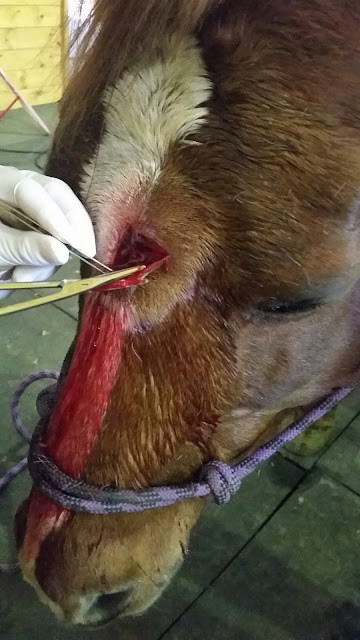 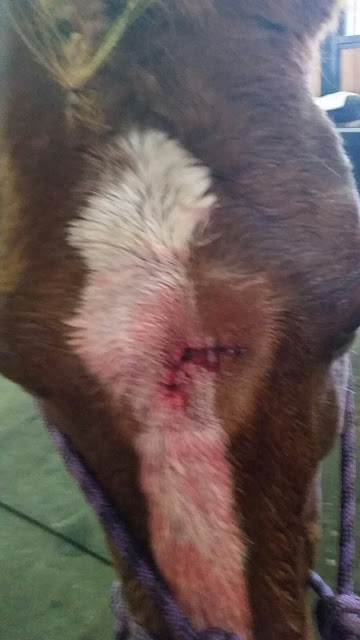 Finished product with a little healing cream on it. (I can't remember the name.  It's prescription only.  I'll update this when my vet texts the info.) 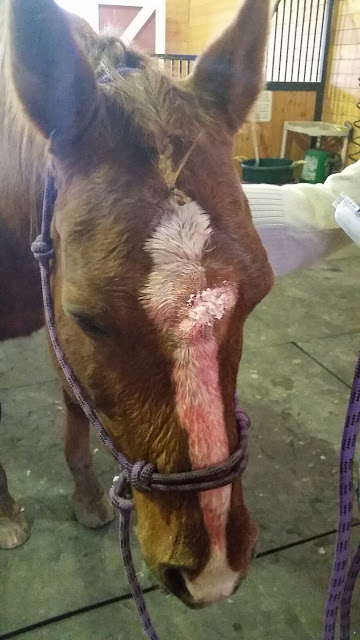 I braided her bangs to keep them out of the wound.  She was still quite groggy. 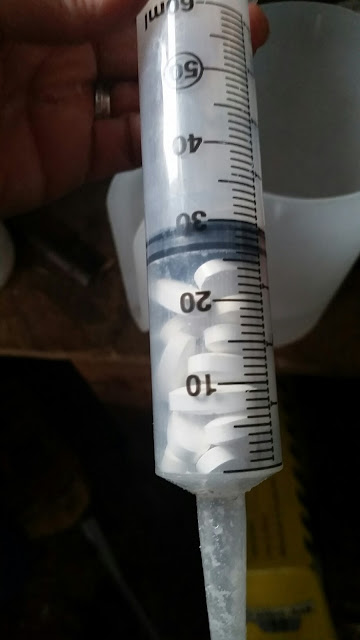 We were sent home with Bute and SMZ's, and we're going to put neosporin on the stitches to keep them moist.  I like my vet's method of soaking the SMZ's.  We put the pills in the syringe, push the top down, and then fill the syringe with warm water. 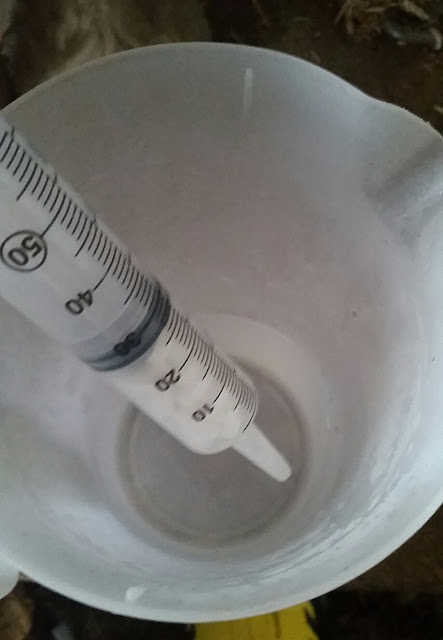 Then shake it up and mix it with the grain. 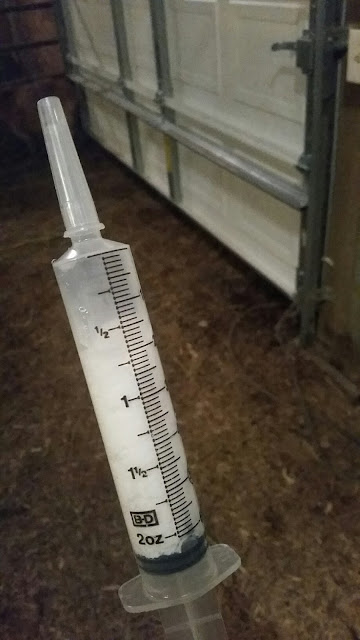 Things I learned about head wounds:
1. They heal fast.
2. They aren't prone to proud flesh development like leg injuries are.
3. It's advisable to have your horse wear a fly mask during the healing process to guard against itching.
4. If you wonder if it should be stitched, it should be.


After giving Penny her meds, I worked with Beautiful on Day 10 of the Challenge.  I wanted to up the ante with the standing tied training by introducing her to new, and possibly scary objects...like the empty wood shavings bag I had just emptied into her stall. 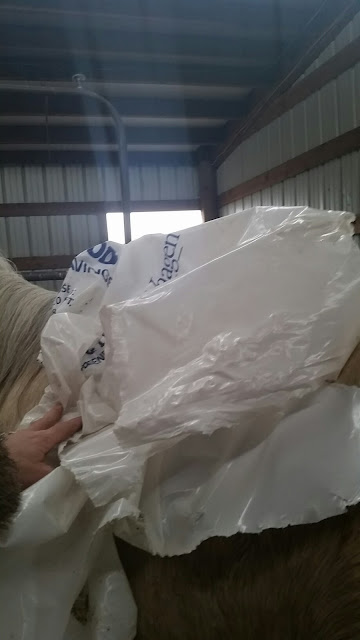 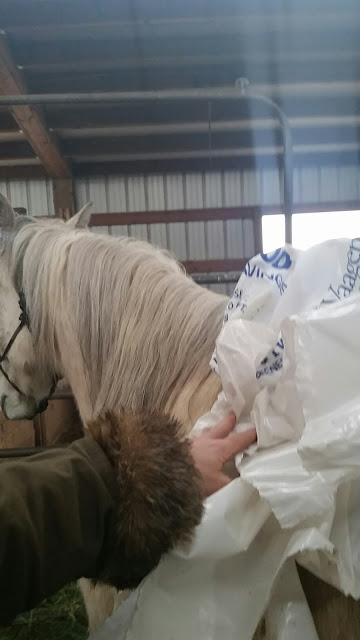 I was proud of her.  She pulled back at first, but she didn't tighten the rope.  She made a mental adjustment and came back to a relaxed standing position.

During this, Penny was charging the stall gate behind her, like she was going to kick her butt, if she could.  Beautiful didn't seem phased, which makes me think she may be better poised to win the WWIII between them.  In my experience, the one who does the most huffing and puffing, when let loose, gives up the fight first.

I could be wrong.  I'm not looking forward to WWIII.  Not one little bit.  For  now, they're both still on stall rest...fighting from afar.
Posted by Linda at 5:59 PM