If it wasn't for the 100 Day Challenge, I assure you, I would not have dug my trailer out of the snow and hauled my horse on it.  On any normal day, I'd look out there and say, It isn't happening.  But the Challenge held me accountable, and when I saw that it was going to be 34 degrees and the main roads were completely dry, I didn't feel I had a good excuse not to.

I called my friend who lives down the road to go with me for moral support, and she did. Off we went.  Turns out, the driveway from the barn to the road was the scariest part of the trip.  There was a moment my truck started to slide and get stuck, but it was able to correct in 4-wheel drive, very minor, actually.

I hadn't worked with Leah since before Christmas, so she was full of it.  Most of our lesson was on the ground, bringing down her energy.  Lunging her, alone, didn't work.  In fact, it amped her up, even though I was controlling her feet and her direction. 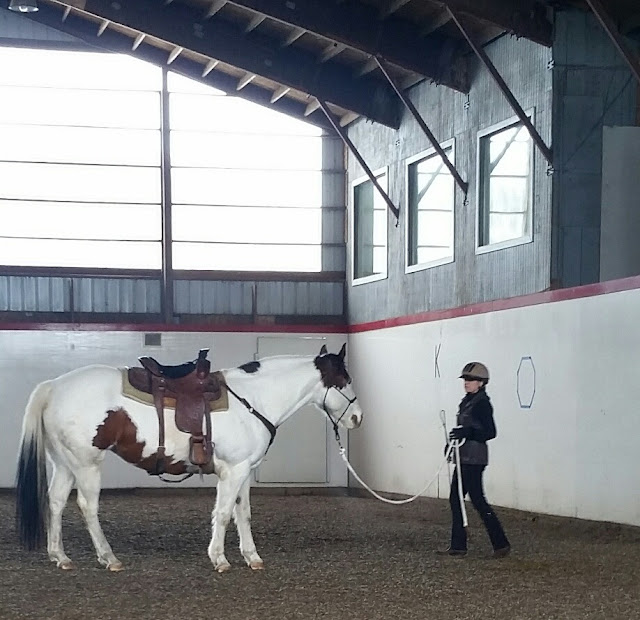 My instructor had me work her on a circle with the intention of lowering her speed.  I would ask her to trot out, but if her speed picked up, I would pull the rope to my belly button and release, pull and release, and so on, until I got the speed I asked for.  If she didn't pay attention, I stopped her and had her square up.  It was gentle, easy work, but it asked so, so much more of her than just trotting in a circle different directions.  At one point, she started to resist and go the opposite direction of what I was asking.  Gentle correction, and that was that.

Another activity we did was touching her nose to the cone.  When I first heard that one, I thought it was going to be easy.  I led her to the cone and parked her right in front of it.  My instructor was like, No, that's not what I'm asking.  I want you to stand about five feet away from the cone and then direct her there, without moving yourself, and have her touch her nose to it.  You have to control her feet and her speed.

At first, she blew right past the cone, so I had to turn her the other direction and bring her speed down.  When her speed picked up, I had to do the same thing I'd done on the big circle or stop her.  Eventually, I was able to hold my arm out and point at the cone and she'd quietly follow the lead, really trying to figure out where I wanted her to put her feet--even by inches.  It took a lot of direction changes, and energy adjustments on my part, to get her to that point. 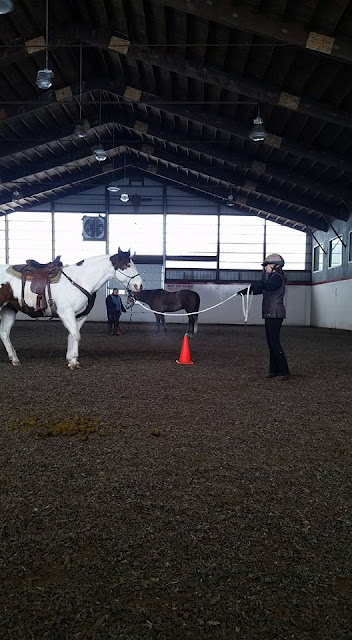 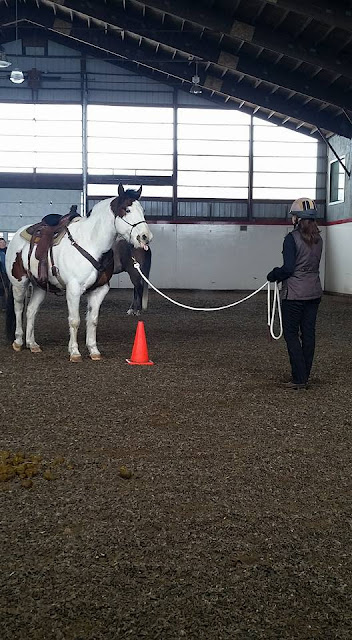 Alas, we were ready to saddle up.  At first, she was more reactive than usual, so we worked again on bringing her energy down through mine.  I became lighter in the stirrups, sat back, and directed my own energy downward.  I was doing the same thing we'd been doing with the cone.  It made a big difference. 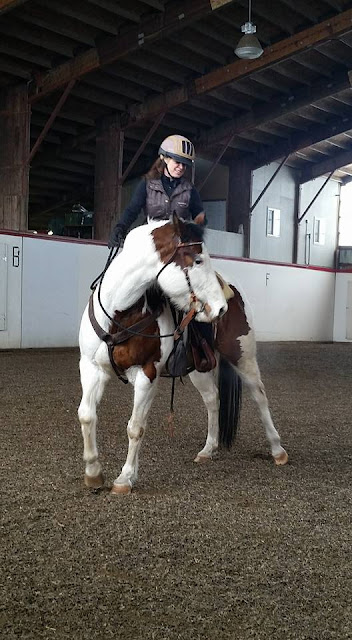 I have to throw in a review here.  If you're a music lover or current (or former) band geek--like myself--you will LOVE this series--Mozart in the Jungle.  I've been watching it for a while and was thrilled to see it won the BEST TV SERIES Musical or Comedy at the Golden Globes.  Yay!!!! 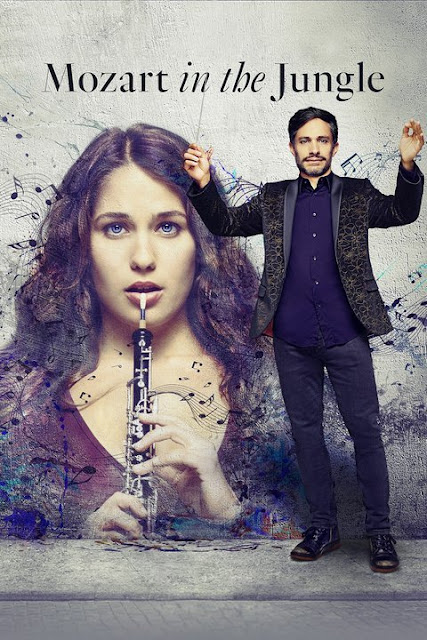 Where else can you watch television and see drinking games that center around a flute and oboe play off?  Or, hear music jokes?  Like, How do you get a guitarist to stop playing?  Give them sheet music.  How do you get a pianist to stop playing?  Take away their sheet music!   Where else can you go to hear Mozart and Bach played throughout?  Or, see and hear a symphony practicing Tchaikovsky's 1812 Overture in the ghetto?