"Try to find the right place for yourself.

If you can't find it, at least dream of it."

Mary Oliver, "Leaves and Blossoms Along the Way", Felicity

Yesterday morning was cold and foggy, and I dreaded the thought of hooking up the trailer and driving to a lesson.  But I had faith.  Hallelujah!  That the clouds would part and the sun would shine.  Hallelujah! 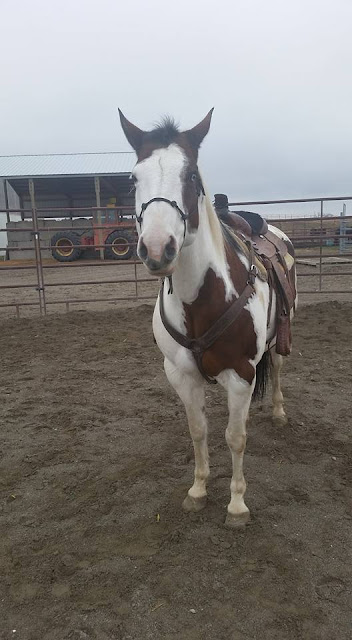 There she is.  The star of the show.  I wish I had more pictures, but I feel awkward stopping the lesson to ask my instructor to take one.  I usually just snap a quickie before the lesson begins.

You're going to think I'm wishy washy when I tell  you what I'm thinking next--but I've probably earned that title long before this.  Remember the whole changing her name thing?  Well

This led to a few restless nights, tossing and turning, and thinking through the question, do they really know their names?

Off I trudged into the fog and mud yesterday morning, truck running, trailer waiting, and Cya was like, Um, I'd rather not enter your mobile-rat-trap, thank you, and walked away slowly.  The kind of walk that says, I don't want to go, but I still want to be friends.

Fortunately, all those restless nights had produced another name to try--one that sounds like Cya.

"Leah," I said.  She stopped. Her eyes softened.  She turned to look at me. I walked up and placed the halter gently over her head.

I'm not an expert, but I'm pretty sure they know the sound of their names.  For example, Cowboy's name for me, is "hu, hu, hu," said in a gentle, throaty, grumbly way. Just three "hu's". He's greeted me that way forever, and I can hear him call me from wherever he is and know where he is instantly.  I even hear him call me in my dreams.

Anyway, if you're still willing to follow along with my many name changes, the one I've settled on is Leah.

At yesterday's lesson, I was still working on turns.  Turning left, I was to hold my left rein steady (contact) and execute two pulls with my right rein (closed fist--turn it down, turn it down) and light contact with my right leg.  It worked remarkably well.  I had to stop though and ask my instructor why we were doing it.  Why that, rather than plough reining a turn?  Her answer was that the pressure put on my right (outside) rein--those gentle downward tugs that you wouldn't think a horse would pick up, but since they're such sensitive animals, they do, is the precursor to the pressure I'll put on their neck when we advance to neck reining.

In fact, she's showing me several ways to execute a turn and, depending on how Leah responds with her energy and balance, which to use when.  The goal is to have her balanced and moving forward from her hind end.  I believe that's called impulsion.  Rather than on the forehand, which is where they are unbalanced, heavy on the front, and not using their hind end.  It's hard work for them, especially when they're not used to it, and Leah tired after 15-20 minutes and began to trip a little.

After the lesson, when the clouds separated and the sun shined, I took Leah home, traded out for Cowboy and went on the most glorious fall ride you can imagine.

Here's a picture of hu-hu-hu with her horse, Cowboy, in the Spokane River. 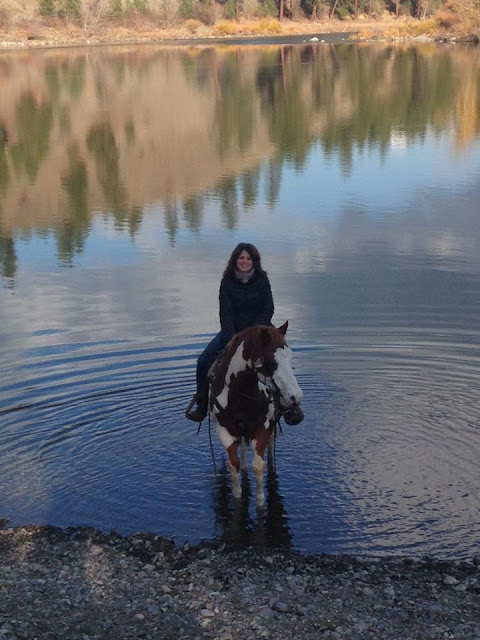 Next lesson is Friday.  I can't wait!  Riding Leah is super fantastic.  I love working with her and building our relationship.  Bring it on.