One of the easiest and cheapest training tools, I've found, is the tarp.  Last month I took Quincy to a trail course and there were two obstacles that she failed to go across: a tarp and water.

Today we worked on the tarp.

There are two things about the tarp (at least) that can scare a horse. One, is the look of it, and the second, is the sound of it under their feet.  If there's a third, it might be the way it shifts and moves.

At the trail course, Quincy got it stuck to her front foot and when she backed up, it came with her.  When you think about it, something like that could easily happen on the trail--especially if they get their foot caught in down or buried wire.  That is a pretty common occurrence on rides when you get off main trails. 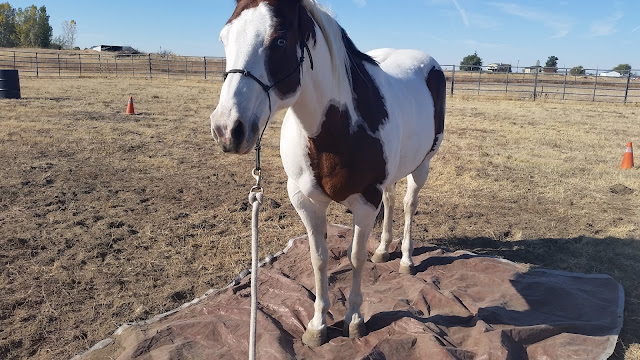 I think the tarp is also good preparation for eventually going over water obstacles.  I hope so anyway.

When I first put the tarp out, Quincy shifted into HIGH octane.  The other horses had been let out and were running and bucking, and she decided to run, too.  At first, I had the tarp folded into quarters the long way, and she jumped it.  Eventually though, she slowed down and trotted across it.  Whenever she'd let one foot touch it, I'd praise her.  Soon she was letting all her feet touch it and she slowed to a walk.  I unfolded it in half and did the same thing.  Finally, I unfolded it entirely and had her go across from both directions.  Each change took a little time, but less than the previous.  And, at the end of the session, as you can see, she was standing on it.

At that point I saddled and bridled her and worked on the bending-in exercises my trainer was having me do: pulling her head around and releasing until she stayed.  I worked on releasing her hind and front quarters a bit and then mounting from both sides.  When I was on her, I bent her head around to both sides.

Finally, we worked from the ground over the tarp again with her saddled, but by that point, she had no issues with the tarp, and wearing a saddle didn't add any extra obstacle to her.

Later today I'm going for another lesson, but this time with a different trainer who is going to help me with my first rides.

I'm kind of nervous.  I wish I could go back in time to my youthful optimism--that time in life when you don't know what "can" happen.  I keep having images flash through my mind of run away horses, although she has never acted like she'd run away.  That's why I think more of this as my training than hers.  I'm training myself to know her and trust her, which is just as scary, if not more so, than going over a tarp.


Update: I went to the lesson and it was GREAT.  The trainer, Rachel, rode her and then gave me a riding lesson on her.  Quincy did wonderful.  She's very green, of course, but was in tune with me and sensitive to the cues.  She's super "forward", but didn't try to run away.  She would easily transition from trot to walk and stop--which went a long way to building my trust in her.  The trainer complimented my original trainer who put two weeks on her, and said she really likes my little (huge) mare.  She thinks she's going to be a super trail horse.  In fact, she offered to ride her Monday or Wednesday on a trail ride with Cowboy and me.  I can't wait!  And, from now on, all my lessons with my actual trainer, Regina, will be in saddle. 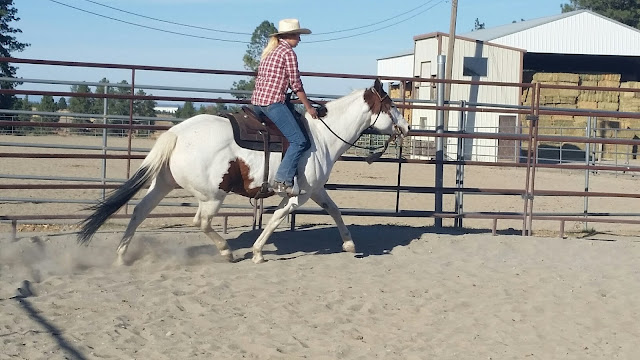 (Picture of Rachel.  She rode her for about ten minutes and then gave me a riding lesson for the remainder.)
Posted by Linda at 1:06 PM