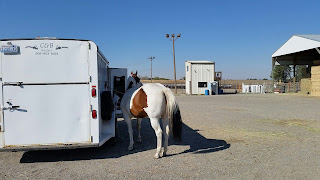 Getting Cya into the trailer today was a breeze.  Whew.  During the ride over to the lesson barn, however, she did nick the inside top of her left hoof, probably from hitting it with her right hoof.  It was bleeding a little when we arrived.  That makes me think she either isn't balanced well in the trailer or she was pawing around.  Hard to say since I can't see back there when I'm driving.  Whatever the case, she loaded and unloaded quite well.

As I waited for my instructor, I had time to groom Cya and work on her bending and bubble exercises.  When my trainer came over she asked me what went right this week and what went wrong.  I told her I was a little confused about the bending, so she watched me.

The bubble work was solid except she wanted me to quiet down my "ask" for the back up.  I tried using a more gentle nudge/wave on the rope, and Cya picked it up instantly.  My trainer would like to see her stay softer in the head.  Cya has been raising her head for the back up, and she needs to be more relaxed--like I'll want her in the saddle.

My new homework was backing her up as I stood at her side.  My trainer wanted me to pull into the center of her chest and have her back up until the opposite front leg went back, then release.  She also wanted me to pay attention to keeping her soft and centered.  She had me stand in front of Cya, while she backed her, and look at her tail.  Her tail should be directly in between her legs.  If it's off to one side or another, she isn't balancing out and, in her case, she was bracing from the opposite side--which is to say, she wasn't doing it as willingly as we'd like.

These little things can seem nit-picky, but they do make a big difference in her softness.  I just have a hard time really seeing it because it's so darn subtle.  Quite honestly, I thought she was doing great, but when my trainer showed me the difference it was clear.

We also worked on yielding hind and front quarters.  Cya is pretty good at that, but stiff.  I was having her pivot around on her front to release the hind, but my trainer wanted me to let her move her front and release the hind more smoothly.  As for the fronts, she didn't want me to worry about the crossing of the front legs yet, she wanted me, rather, to concentrate on where I wanted Cya to put her opposite front leg and get it there.  The crossing will come later.

Lastly, she had me work on the lunging from the week before, but working with her to square up properly when she came to a halt.

On a positive note, my trainer gave an assessment this week and said she thinks my little mare is going to make me a really nice trail horse!  High praise!  (It's funny how a little encouragement/validation can sink so deep into your heart.)

When the lesson was finished, I met with another trainer who rides horses for clients.  I asked her if she'd be willing to work alongside me for the first rides I do.  She was interested, but she has a waiting list.  I think Cya is ready to start some rides this week, and I think I'm going to do it myself.  All of this working and ponying has helped me to know and trust her.  I think, in the next few days, I'll go ahead and saddle and bridle her and work on all the bending exercises with the bit.  My trainer said that would be good.  If I feel comfortable, I'll go ahead and initiate the next step--getting on her, bending from the saddle, and walking her out.

One thing that has always bothered me is Cya's name.  She came with that name, and I don't think it suits her.  I've never liked it, but I've never changed it.  Is it too late now?  Everyone knows her as Cya.  Would it throw everyone off to change her name at this late date?  Does it matter what everyone else thinks?