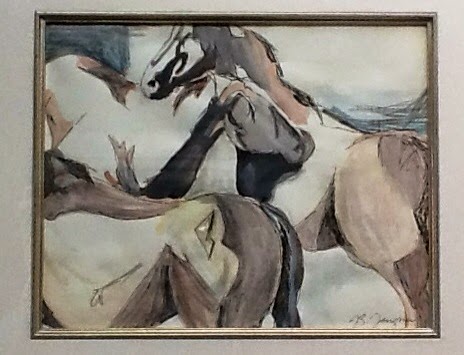 Neglect:  "To pay little or no attention to; fail to heed; fail to care for or attend properly; fail to do or carryout, as through carelessness or oversight; habitual lack of care."

Lately, I've been thinking a lot about what I would call my style of horse care.  There is a term, often used, "benign neglect", that seemed to sum it up pretty well.  You hear it used with parenting, gardening, and in a host of other situations, including horsemanship, and I think most people take it to mean letting a horse "be."

The problem is, I have a hard time with the word "neglect".  Although I know what the phrase means in spirit, the word itself implies inattention and carelessness--even laziness and worse, abuse.  However "gentle and kindly" your intentions, if it equals abuse, you should, at the very least, have your horses taken away.

I saw what "abuse" looks like two years ago when a criminally insane horsewoman boarded about 50 horses next door to me.  In actuality, she is said to have owned over 200 and rotated them in and out of several pastures she rented in two states.  When a neighbor would complain that the horses looked skinny or weren't being properly cared for, she'd come in the night and take them to one of the other pastures.  Although we called our local law enforcement, her game was pretty good, and it took several months to gather enough proof to actually press charges and confiscate the horses.  Of course, many had already died and many others had to be put down.  They were starved, sick, lame--you can read about it in the Spokesman Review.

So, for personal reasons and the above reason, I don't like the word "neglect."

And yet, my style does go along with that basic philosophy of doing "less" with the caveat of keeping a very close eye on their every need, bump, scrape, bruise, weight loss, weight gain, lameness, or anything we might consider "off."

Wanting to come up with a term that more accurately describes our style, I gravitated toward unintrusive--or, in reality, least intrusive.  It doesn't have the same ZING, but it's much closer to the truth.

Intrusive: "Causing disruption or annoyance through being unwelcome or uninvited."

This style is all about providing the very best of the essentials and watching over the herd like a mother hen--or mother horse--but only interfering with the overall lifestyle of the herd when absolutely necessary.

In the years I've lived with horses I've come to realize these three things matter most to overall health:

Being with the herd reduces stress and stress related (lower immune function) illness. It helps them re-calibrate their minds and provides exercise, discipline and socialization. I believe that most of what a horse learns and what we hope they will learn, starts with the herd.  The herd heals, protects, and maintains order, all the essential elements for relaxation, confidence and trust.

I've heard people say, this or that person doesn't do anything with that horse, they should get rid of it!  I disagree.  If the horse is out on pasture and has the above three needs met, I don't think it matters what a person chooses to do with them.  The horse isn't going to feel bad at all if you leave it alone.

On the other hand, I used to board at a stable where some owners would pay for a stall and feed and not show up again for months. In one case, the boarders said they hadn't seen the owners in a year. That was heart-breaking to hear.  The horse didn't have the freedom to interact with the herd, graze or roam--it was denied all the natural things they need and the human interaction as well.  In that case, I'd be the first person to recommend re-homing.

I've been at both ends of the horse care spectrum.  I've been the person who floated the teeth annually, immunized every six months for everything (and I do mean everything--including strangles--annually), wormed every three months, and hand exercised them every day.  I was the Queen of tinkerers.

I'm not that person anymore, nor do I miss her.

Today, my horses have the very best ferrier care, the very best feed (orchard grass and alfalfa--separately) I can find (purchased each summer), and 24/7 turnout on their pastures.  The only reason I take them away from each other is to ride, train, and feed special needs foods (34 year old Red).  If one gets too fat, they have to come in, and I hate to do that. I may try the grazing muzzle this year as a sort of compromise.  The reason I buy alfalfa and grass separately is because I want to know exactly how much of each they're getting. For the most part, they only get the grass, provided 24/7 in round bales, but on cold days, I throw them out some alfalfa for extra protein.

The intrusion into their lives is the least I can justify.  We've had no illnesses in the herd for the last couple of years.  (Knock on wood).  Our horses are the happiest and healthiest they've ever been.  They're relaxed, content, and eager to see us when we come out.  Red is old--34--but he still gets around great and is #2 guy.  Shadow has always had bad arthritis in his knee, and it gets worse with old age, but like Red, he still gets around and is #1 in the herd.  Cowboy is still sound and trail ready 8 years post P3 fracture and coffin bone displacement.

Some of that is just plain LUCK and I'm thankful, but some of it is definitely because we concentrate on the 3 things in that list and being the least intrusive we can possibly be while still watching their every hiccup from the periphery.