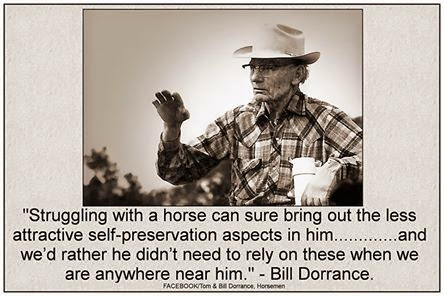 This was being shared on Facebook, and I thought I'd add it here for those who haven't seen it.  I love this quote.  The same could be said for people.
Posted by Linda at 7:24 AM 2 comments:

No Tricks, No Treats

I'm always learning about horses and me with horses, which is, by its nature, different than someone else and their horses.

That being said, I personally have a philosophy of "No tricks, No treats" to get a positive answer to my requests.  I adhere to that policy even if time is "of the essence."  This doesn't mean that I never give treats, it just means I never give treats when making a request of my horse.

Today was manicure/pedicure day for my herd.  As I've said before, I have a wonderful farrier, the kind who shows up early rather than late and never misses an appointment.  The kind that keeps all my horses sound and barefoot, but is willing to hot shoe if needed.  His philosophy, if it isn't broke, don't fix it.  In this case, if they can handle the rocks, why put on shoes?  If it turns out you need them, call me, we'll put them on.  If ever I have an issue with any kind of lameness, I call him first and he comes out to the house--no charge--as soon as he can. Because of him, I'm riding my horse Cowboy 7+ years post P3 fracture/displacement into the coffin joint.

In exchange, I give him my trust and the freedom for him to manage my horse's feet on a schedule he thinks is best.  In our case, it's about every six weeks.  Pretty simple.

Today, like most days, he showed up early and before I'd had a chance to gather the horses.  I went out to meet him and haltered and tied two to get him started and then went out to the North Pasture to gather the rest--which basically amounted to our mare herd plus Cowboy--who isn't sure if he's a mare or a gelding on most days.  He's like the little brother whose older sisters are constantly dressing him in dresses and painting his fingernails pink.

Of the mare herd (plus Cowboy) each one allowed me to approach and halter EXCEPT Beautiful Girl.  She decided she'd rather be a naughty little stinker and deny my repeated requests to come say hi to her Uncle Scott.

I walked back to the barn and asked Uncle Scott if he was okay with me doing what I needed to do to catch Beautiful Girl while he continued to trim.  He said no problem--go for it!  (I always ask his permission before I do anything that could upset the horses since he's the one underneath and in possible harm's way.)

I went back out to the pasture and did the basic Catching a Naughty, Willful, Little Stinker Horse 101--which amounts to what we all know as pressure and release--pushing away, directing the feet, waiting for some basic joining up clues like licking the lips, keeping an ear cocked in my direction, and turning to look at me, and when all those things occur, approaching with halter and rope openly displayed.

It took more time (4-5 minutes all and all), and a little more walking on my part, but was worth every bit of it.

When I got back to the barn Uncle Scott was waiting patiently.  He told her, Silly girl, you just made more work for yourself and then got down to the simple business of making her feet pretty as she stood tied like the most docile, sweet mare you've ever seen.

There are some horses for which this won't work or, at the very least, will take much longer to work, and they are usually the ones who have had some "Trick and/or Treating" in their previous lives.  I had one of those and my response was to do the catching well ahead of the farrier arriving--like the day before.

That being said, there are times I give treats.  I give treats when they don't expect them and when there's nothing to be gained from giving them.  I'll go out at night after they've had dinner, for example, and walk among them in the pasture handing out treats.  I like to do that every so often so that they don't think I'm always coming out there to get something from them.

I've been meaning to write a post on tying the hard to tie horse with the use of Blocker Tie Rings.  In case it's a while before I do, I just want to say that using a Blocker Tie Ring at each leave 1, 2 and, eventually, 3 is a wonderful way to teach being tied without risking a dangerous pullback.

More on that later...