The Joys of Keeping Red Alive 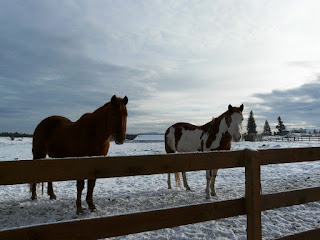 After receiving a couple of comments on my very old posts, I decided it was time to sit down and catch up rather than have the last post be pictures of Uggs, Danskos, cameras and money.

There have been, basically, three things gobbling up all my time: 1.) Keeping Red alive, 2.) Working on the radio show, and 3.) Getting a new office set up.

The first thing, keeping Red alive, is my main priority.  I found him about three weeks ago in a bad colic situation.  I had been gone all day working on the new office for a practice my husband and I are opening, and while I was gone it had begun to rain.  It was also cold and windy.  Well, Red is almost 32 years old and has a tough time regulating his temperature and keeping warm which is, I'm sure, what set off the colic.  It was a scary situation.

We returned home at dark, about 6:00, which now makes it dark, and drove immediately to the barn to feed.  All the horses showed up, except Red, so I set out walking the dark pasture to find him.  It didn't take long.  To back up a moment, it was the third time in about a week I'd gone out in the dark to look for Red.  A couple other times he also hadn't shown up at feeding, which made me start to suspect moon blindness.  In those cases I'd just haltered him and walked him back to the barn.  This time, though, he was standing off alone and when I got up to him I could tell he was shivering and the ground around him was worn down like he'd been rolling a lot.

I haltered him and took him to a stall, blanketed him, and he immediately went out into the uncovered turnout and laid down in the cold rain.  I got him back up and locked him in the stall, gave him a bit of Banamine and lots of hay and waited it out.  By morning he was back to normal, but my life is definitely not.  I am, officially, Red's babysitter now.  My whole day revolves around keeping him warm and fed and getting him plenty of exercise.  I turn him out, bring him in, turn him out, bring him in, clean his stall several times a day and watch over his diet like a mother hen.

We have it so well worked out now, I don't even have to go halter him.  He knows when he's out and I come to the barn, it's time for him to go in, so he meets me at the gate.  I open the gate, he walks over to his bucket of Equine Senior, knocks off the top, starts to eat.  I walk over to him, push his butt back toward his new stall, and he grudgingly leaves the bucket and goes in.  I fill up his grain bucket with two large scoops of Equine Senior, 1 large scoop of whole oats, and then fill his feeder with as much flakey alfalfa as it can take.  I blanket and unblanket him.  (Red has always hated blankets and I've never been a big fan either, since it keeps them from getting a good winter coat.  My compromise is taking it off and on.  I also need to keep up with his condition.)

My new rules: If I'm going to be gone for the day, Red stays in.  If the weather looks iffy, he gets a blanket.  (I check the hourly weather forecast every morning).  Basically, what Red wants, Red gets.

Not all horses are worth this effort, but he's not like all horses.  I know I'm getting toward the end of his days, but if I can keep him going for a while longer....it's worth it.  I think, and my old-time-farrier agrees, he's got a lot of life left in those old bones!

And you know, I kind of like being needed like this.  My kids are all grown up and there's a space this fills in my heart.  Also, Red was always the good old ranch horse.  He was never "in-your-pocket", but rather, he was stand-offish and did his job.  He's still not all mushy sweet like Cowboy and Beautiful--he is and always will be that stern, good old boy that you know is about three times smarter than you are.  The little routine we have of him going and knocking the top off the bucket is endearing for me because it's funny and he seems to know that as much as I do.  It's our game.

Surprisingly, when he's out, he's still second in the herd, but that's because of his horse-wife, Cowgirl.  She will not let the others take a spot above him.  She is loyal to Red to the end.  When he's locked up, Shadow is their leader, but as soon as Red is out, Cowgirl takes a place behind him and all the other mares follow.  I'll look out the window and there will be Red leading his mare herd.

After writing all that, it occurs to me how insignificant the other two time-consuming things are in the larger scheme of things, so, I'll leave my catch up post there.

Is there any other life except a life with horses?  I hope not.
Posted by Linda at 8:58 AM