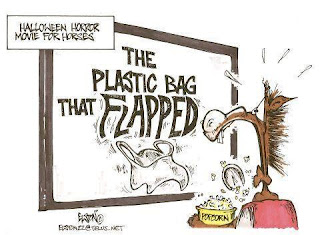 Saw this today on Facebook and had a laugh.  So true!  Of course, it's part of a larger series of movies: The Bird Who Flew Up From Nowhere, The Wind That Blew Too Hard, The Metal Drum that Popped, and The Corner of the Arena where the Boogie-Man Hides.

And speaking of Facebook, we have a contest going on now at Real Sisters Talk for a $25.00 iTunes Gift Certificate.  If you "Like" or "Share" the page, you're entered. If you do both, you're entered twice.  I asked my sister, who books all the shows, if she could work on my "dream list" of horse trainers.  First on my list was the one and only....Buck Brannaman.  I also asked for Julie Goodnight, Chris Cox, Linda Tellington-Jones, and Mark Rashid.  I told her at the start GOOD LUCK getting any of them to come on, especially Brannaman, but give it a shot!  If any of you have any pull....please pull them our way.  I want to dedicate part (or all) of November to horse trainers.

Music month has been fun--lots of GREAT bands.  And there was another thrown in that wasn't music related, The Bitter Waiter, but we were just so lucky he wanted to be on, we took him while we could.  He's hilarious.  If you want a good laugh or have ever worked in the food service industry (as I did) you should check out his blog.  The Bitter Waiter Dot Com.

I finally got ahold of my local riding/trainer to help me put some time on the fillies--Cia and Beautiful.  He can't fit me in until September, but that actually works perfect.  It gives me more time to work with them tying and saddling.  The great thing about him is he comes to our place.  He's very patient and just "rides" them out.

In other horse and animal news:

1. Cowgirl's feet are on the mend and she's walking much better without Bute.  She's still confined to the stall.

2. Shadow, our alpha male, cut his eye open and has been confined to fly mask and stall.  It's healed up quickly, but the eye is a very, very hard place to clean....as you can imagine.

3.  Cowboy is hitting the trail with me tomorrow.  He's doing well.

4.  We got all of our baled hay put away this week.

5.  My favorite cat died--the one who came out of the wheat fields on the first day we moved into our first horse property.  The men who were putting up the pasture fence named her "Killer" because she would kill things all day in front of them.  The little girls at our house, seeing "Killer", decided to catch her, take her inside and dress her in doll clothes.  From then forward, she was named Mary Jane, or MJ. 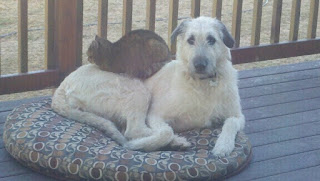 MJ loved our dogs and would sleep on their backs every day.  It was probably her strength, but may have also been her downfall.

Saturday morning my husband came up and sat beside my bed as I slept and said, gently, I have bad news.  It was the sweetest way bad news has ever been delivered to me, and I'm thankful for his approach.  It was a hard loss for both of us. (It was the first cat he'd ever been attached to).  And what's worse, we don't really know how she died.  It wasn't a coyote because they would have taken her body, but she laid pretty peacefully in a spot where she often slept among the flowers. (She had bled out of her mouth and nose).

My husband and I had a little good-bye for her together and we buried her next to her daughter and our old dog (who she loved), Elsa, under what we call, Elsa's Rock.

That day I counted all the animals I've lost in my lifetime, and having been an animal lover, it was a lot.  I thought how nice it would be if we could opt out of death for those we love, but it's not part of the deal, is it?   We've just got to appreciate the time we have together while we have it...with the people we love, and with the animals who love us.  She was a great cat and we have lots and lots of awesome memories with her.

Here's to MJ, and every other noble being on earth.  You know them when you see them.