TTouch Lesson: Part I: Is It All About Fear? 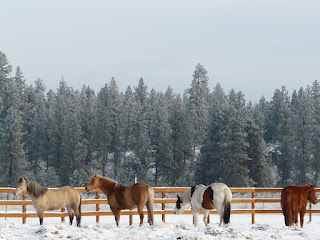 Is every aggressive equine reaction related to fear?


How you answer says a lot about how you will work with horses.

When the TTouch practitioner arrived at my barn on Monday, the first thing she said was how upright and alert Beautiful was as she approached.  It's a fear reaction: head up, ready to fight or flee, adrenaline being pumped, thinking turned off.

Well, that's not good for her, she responded.

After 3 1/2 hours of training, I have a lot to write about TTouch, and a lot to learn.  But this is a good starting point, because this is the very heart and soul of the matter.

"One of the main principles of TTEAM work is to teach a horse to override the fight or flight reflex. ...In the learning process, whenever there is pain, fear, or fear of pain, there is a release of a stress hormone called ACTH.  It causes the animal to access the reactive or reflexive part of the brain rather than the thinking part". .....When flight is not an option "some individuals turn their fear into fight or aggressive actions.  These horses may bite, kick, and when pushed to the point of feeling cornered, attack."  Robin Hood, TTEAM Connections, November-December 2001

If you work with horses, you know all of this, but there is one nagging question...

What about the horse who shouldn't have anything to fear but appears to be an alpha and just aggressive and dangerous because they want to be?


That's the horse that always throws our thinking for a loop.  Well, Robin Hood (Linda Tellington-Jones' sister) addresses that in her article about the 5 F's.  She writes that all animals, all living things, have a hierarchy of needs, one of which is to feel safe.  "Perhaps there are some animals who feel 'safer' giving up control than others.  The feeling of safety may come from having a person who you trust be consistent and fair and one who 'listens.'"


She likens it to driving.  When asked if they feel safer driving or being driven, most people will say they prefer driving.  But, if given the chance to have someone drive for them who is a good driver, a safe driver and listens to them if they give them feedback, they would prefer to sit back and relax.

Is it the same for these horses?  Would giving up control to a trusted leader help them give up their aggressive or dangerous actions?

I think, yes.  I've seen it time and time again.  My dear friend who trains and will be taking Cia for me in March is one of those quiet human leaders.  Horses that come in aggressive, some of which are stallions, will walk on a loose line behind her happy and relieved to be in the presence of a real "leader."  She's observant (very tuned into the physical and mental state of her horses), she's consistent, respectful, predictable, competent and confident.  You know that old show Who Wants To Be a Millionaire?  You get the option to phone a friend in time of need?  Well, she would always be my phone a friend in any and all horse dilemmas.  Ironically, she's also the one who originally told me about TTouch...about ten years ago.

The 5 F's of a horse's fear response, according to Robin, are:

They, and others, have seen all 5 responses to fear.

But what do we do about it?

That is what I'm seeking to learn and what I'll be writing about as we go through these posts on TTouch.
Posted by Linda at 10:32 AM