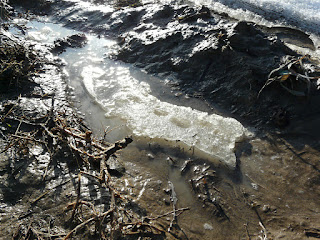 Andrea had a lovely blog post about how horses are like water.  I hope you'll stop by and read it.  In this season of rain and puddles, overflowing streams and flooding, it's especially appropriate and will inspire you to think about your work with horses.

When you see a horse "trapped" you know danger is soon behind.  Once, I was watching a young pony group jumping their horses and there was one that would not go over.  However, the rider continued to circle him and try to force it, each time the horse balking and rearing.  The final rear, sadly, flipped him on his back.  Both were okay, but as you know, nothing could be more dangerous.  I heard the coach wouldn't let him be used again and he was sold.

We've probably all found ourselves in these types of situations with horses sometime in our journey.  Usually it's a forward problem on the trail--forward over water, onto a steep, rocky trail, past loud crows, but forward. 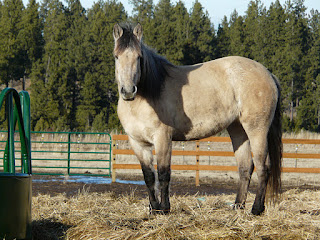 In the case of a young, untrained horse, like Beautiful, you have energy that can move any direction: up, down, across, back and forward, and often explosively.  So, a young horse has to constantly be directed forward with very little pressure on the head.  Beautiful has a tendency to back up when she's scared and she used to rear (though hasn't for a couple of years) so it is especially important that her energy always be directed forward.  I do believe that each horse has its "go-to" movement that is triggered by being trapped.

Yesterday I was grooming her as she stood ground-tied in a stall.  All of a sudden she heard one of the horses coming and she darted forward.  I didn't want to reward her by letting her leave the stall, but holding her still wasn't going to help either, so I held her rope and let her move forward a few steps here and there, around me, until she calmed again.  She was very respectful of my space and didn't threaten to kick--which may have happened had I tried to completely restrain her.

As I've written before, I'm trying T-touch on all my horses, but in the early stages you really need someone to hold them for you.  I don't have that, so I've had limited success.  I thought I'd be most excited about using it on Cowboy, but in fact, the one I've seen it help most is my pony, Jasmine.

My farrier is going to do some research on chiropractors.  He thinks it's a good idea for Cowboy and Cia.  Cia sometimes holds her left front out, and he believes it's because of some soreness in her back right hip.  Reverse sides.  Every time he picks up her right back foot to trim, she pins her ears, and she's normally a horse that NEVER threatens.

As you all know, there's never a dull moment when you have seven horses.  That's seven different personalities and journeys.  Old Red, thirty-one and still going strong.  Shadow, fat and stiff as a board, but point him down a trail and he'll go anywhere.  Cowgirl, the alpha-mare, gorgeous palomino, cow-horse-- there's no job she can't do.  Cowboy, overcoming his broke P3 and head-shaking.  Cia, a bright-eyed, loving Paint horse who wants to please you in the saddle.  Beautiful, a Mustang who put her trust in people.  And last, Jasmine, the smart little pony who doesn't especially like humans.  Whew!  That's a lot of lives out there in my barn...a lot of possibilities.  A lot of water.