A Christmas Story: Missing my Lost, but Found, Cat 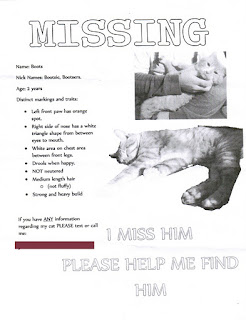 "When the moon gets up and night comes, he is the Cat that walks by himself, and all places are alike to him."    Rudyard Kipling, The Cat That Walked By Himself.

See the poster above?  It could have been written by me, but it wasn't.

It was written by the Orange cat's original owner and it hung, for three months, at our vet's office.  Copies of it, in color, hung at every store in our town.  The one in the picture above is the photocopy our vet made for us when we realized we had that cat.

In fact, we'd named him Odey and neutered him.  Poor guy.  (He was just a little too trusting.)

There were a lot of things that happened in three months, as you can imagine--calls made to neighbors to see if they were missing a cat, a plea on facebook, but deep down we thought he'd been dropped off, like sometimes happens with dogs and cats. Yet, there was something about him and the way he loved to be loved that didn't speak of a drop-off.  I told my husband, over and over again, someone loved this cat.

And, as you can see from the flier above, it was true.  Four days before Christmas, Odey was reunited with his family.  Somehow he'd surivived a six mile trek through coyote territory and a crazy, busy highway, and found our house on his way home to South Dakota.  His parents had just moved here three days before his disappearance and, apparently, his homing device had gone awry.

His confidence and sweetness saved his life.  If he'd been skittish, he'd never have come into our garage and so easily made it his new home.  He'd never have befriended us or us him.

I've always thought this about domestic dogs, horses and cats--if you teach them to love people, they'll never be without a home.

Oddly enough, I'm missing him today...even though he was an outside cat, as all ours are.  Inside, outside, it doesn't matter, they get into your heart.  Although, all I have to do is think back to last night's reunion between them and him--I'd never seen a cat look so happy...or a human mother of a cat--and it helps to let him go. 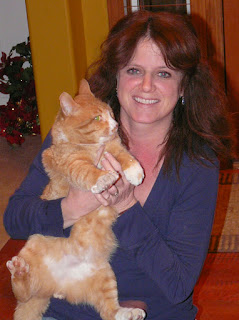