Thinking of Johnny and Moving Forward

I apologize for the time that goes by between posts in my story, but I've decided that one blog post a week works well now-a-days, and it sure does stretch a short story into a lllloooonnnnngggg one!

Taking up where I left off, there I was getting my boots on to go watch my daughter work with the horse I should have been working, running as fast as I could to get to the roundpen and offer my unsolicited advice.   I made myself useful and brought her the tack I wanted Cia to use--Cowboy's saddle and blanket--and her snaffle bit and mecate rein.  Then, I perched myself on the wheel-well of the horse trailer and watched the show.

My daughter doesn't do things exactly like I would, but (in retrospect) I think you either trust the person you give your horse to or you don't give them your horse.  Since they're the ones that have to get on and ride, they owe it to themselves to prepare the horse the way they see fit.  I found myself telling her to do it this way and do it that way, but she acted like she didn't hear me and did it her way--which I deserved.  (Good motivation for me to do it myself---put up or shut-up, as the saying goes.)

Though Cowboy wasn't being worked he was there with me, looking over the fenceline twenty feet away, all by himself and away from the herd.  I could swear he was wondering why it wasn't him in the roundpen.  No doubt it made him curious, because he stayed in that same spot the entire time we were riding her.  I couldn't help myself, and it wasn't fair to sweet Cia, but I was sure wishing it was him.

And there was my daughter, riding my filly, going this way and that, then stopping and asking me if I'd like to ride her, too.

Watching her ride, being in that space between introducing a saddle for the first time and teaching a horse its way with a rider, it opened up a memory I hadn't had in some time.  It was as if Johnny was standing there asking me the same thing, and I was a girl, Shiloh's age, accepting the reins and hopping on my green colt, Tanner.

I've mentioned Johnny before on this blog.  He was the Cowboy who walked into the barn one day to find me and my colt in a very bad situation.  I'd saddled Tanner for the first time and let him go in the arena and somehow the saddle had gotten under his belly and he was kicking around all over the place and I was frozen watching the whole scene and waiting for him to calm down.

In steps Johnny--a man in his late thirties, moustache, cowboy hat, baggy jeans, and a bit of a beer-belly--a quiet guy, but knew his way with horses.  He asked if I wanted help, which I did, and went over to catch Tanner and get the saddle off.  As we stood there afterward, he asked me what I was doing and figured out pretty quick, I needed a little extra instruction. It turns out, he was a trainer--but I was a poor college student supporting two horses all on my own--I didn't have two nickles to rub together--literally.  If anything, I had negative two.

He made me an offer I couldn't refuse.  He'd meet me out there on his lunch breaks and give me some help for free to get me started.  The deal was, he'd only help a little and expect me to do the rest.

And, that's what happened, two days later, after a little ground work and a short Johnny-ride that included two small bucks from Tanner, he was on the ground and offering me the reins.  Tanner turned out to be very easy to train.  Johnny said he was "smart."  He met with me a few more times and invited me to ride with his family over at the "49ers Club" down the road, which I did, but by and large, his only advice to me was ride, ride, ride and, in the process, teach Tanner what I wanted.  He showed me a few tricks with legs and reins to help do that, but in the end, it was all about me and my horse communicating.  Tanner turned out to be the most wonderful and trusting trail horse I've ever rode, so we must have done something right.

I lost track of Johnny pretty quick after that.  I always thought that when I grew up and made a lot of money I'd send him a payment with interest for his help, but about fourteen years had passed, that hadn't happened, and I was out riding with a friend on my new horse,Cowboy.  We were meandering around Tammany Creek and found ourselves on a bluff overlooking the old 49ers Club where I'd rode in those early days with Johnny and his family.

A lot had happened to me in those years and it didn't include making a bunch of money to repay old debts.  I'd been married, had three kids and divorced, and I realized, through all that, I hadn't even thought of Johnny.

I don't know what I said then.  I probably asked why because that's the first thing people always ask when they hear someone killed themselves.  It took me another decade of life to realize there is never, and I mean never, a good reason for suicide, and there is nothing she could have said that day that would have explained it.  I'm just sad the world lost another kind-hearted person who probably had no idea how many lives he helped a long the away or how many people would ask--what happened to that great guy Johnny R-----?

Back to real time, there was my daughter, and a much older me, and I was taking the reins again on a green horse, a blank-slate, a filly waiting to learn a new language.  Her ears back and listening, her body open and trusting, waiting for whatever it was we would do next--tap her on the ribs with our boots, gently pull the reins and her head around--she was accepting it all and trying to learn how a horse and human move forward together.

(To be continued...getting back in the roundpen with Beautiful Girl.) 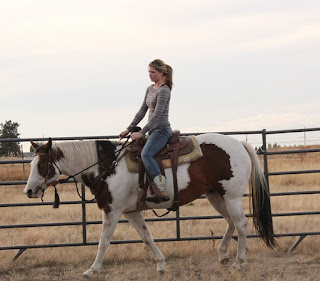