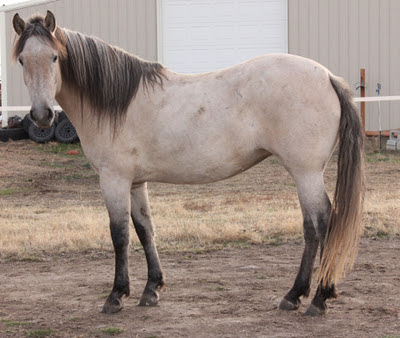 Beautiful Girl: You want me?

Back to my story, and to bring it up to "real-time"...I took the reins from my daughter and mounted up for the first time in, I guess, three months. Cia had her ears back, not in a threatening way, but in an attentive--what are we going to do now?--fashion. She is a sweet horse. I walked her around the pen along the rail, did large circles and reversed directions, and had her stop and back up a few times. It wasn't much, but every little thing done well with a green horse, goes a long way toward building trust and confidence in them.

It probably goes without saying, but when you start a new horse you have tack issues. Horses, like people, come in all body-types and it's rarely a one-size-fits-all situation.  I hoped Cowboy's saddle would fit Cia because I love my saddle, and by looking at it on her, it seems to, but unfortunately, it slides around when you pick up the pace.   She's very round and overweight, so I'm thinking about using this product under my normal pad.  I hope it works. 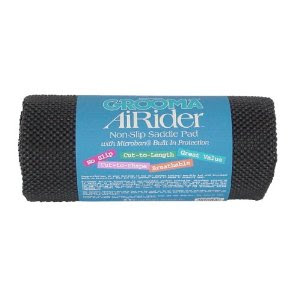 I had to stop her a few times to adjust the saddle, an action that might have really frightened a hot horse, and it wasn't the best idea for a sweet, green one like her either, but it was better than letting it go under her belly. Her back stiffened and her head went up when I'd stand to adjust it. Probably not a good idea to do too much of it.   After I was done, my daughter got back on and worked her lightly to end on a good note.

We did this for about a week at the walk, trot and lope (my daughter moved her up a gait each day) and now she's ready to move into an arena. The problem is, she's lame. Or, was lame. She started to camp out her left front hoof. When I first saw her in the pasture doing that, I mistook her for Cowboy--who camps out the same one because of his P3 arthritis. When I went out and walked her, though, she walked just fine and there was no heat or swelling anywhere in the leg. I figured it was an abscess working its way out, so I decided to give her stall rest, wraps and soaks, and work with Beautiful.

I'm happy to say, Beautiful took right up where we left off. She had no problem tacking up, carrying a saddle at all gaits, and letting me mount. My problem with her is that none of my good saddles fit very well. The only one that does seem to fit is my little training saddle, but it's kind of old and squeaky. I'm nervous about using it for her first ride. I've tried to get the squeaks out of it before, but wasn't successful. I oiled it, powdered it...I'm not sure what else to do.

So, that's where we are now--getting the tack right and nursing lameness. Cia got worse a few days ago, but today at feeding, looked like she was back to 100 percent. I'm going to go out in a few minutes and see if it was an abscess that finally broke through. The round pen has been made back into an arena so that's where I'll be doing my first "rides" on Beautiful as my daughter continues with Cia.

Oh, one more thing, I also decided against bitless for Beautiful. I just don't know enough about it to feel comfortable riding that way. I think it was one of the reasons I didn't feel ready to go past mounting. I do think she'd be a good candidate, but I don't think I'm a good candidate for bitless riding.

The other day I was reading Andrea's blog and had a good laugh when she said she thinks horses are made of glass. That summed up my feelings about this summer's ailments perfectly. Bad news comes in bunches, it seems. I went years with no injuries, but my luck ran out. Anyone who has horses knows that most of what we do is related to maintenance and health care. My one horse who seems to have no health issues? Beautiful Girl. And I find my emotions moving more and more her way as the #1 "Go-To horse" rather than my Mustang "project".

I apologize for the lack of pictures and video, but I didn't have much desire to snap shots as I was making my way back to the saddle. I did take quite a few of my daughter and a few of Beautiful the first day I came back to get her. For the record, I had to catch her. She was Cowgirl's girl rather than my girl--for a few minutes anyway. 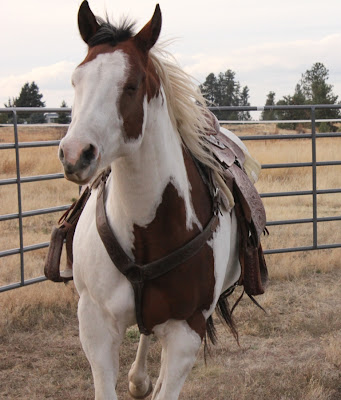 Someone needs a haircut. 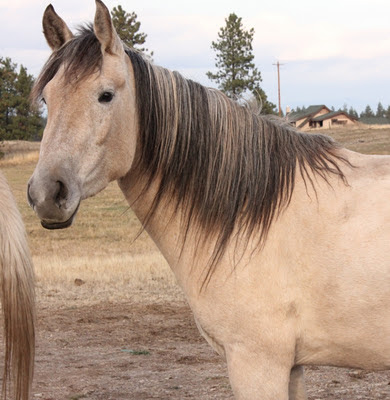 Here's the video from the first time mounting--pretty much the same now, but colder.