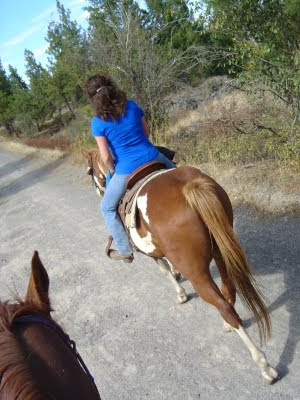 I have to thank Kate at A Year With Horses for telling me about HSS when Cowboy first started showing symptoms. She hit it right on the head. Anyone who reads her blog knows she's a wealth of information about horses--physical, mental, and behavioral--the whole gamut.

When I had a context to put the head-shaking into, many things became clear and, as time passes, I begin to recall other things as well. Were these early indications of photic head shaking? I don't know. But I do want to write about them here, so anyone else whose horse exhibits HSS symptoms can compare.

Here are the questions and answers from yesterday's post:

1. What are the outward signs he has shown?

2. When did they start? Were there any early signs I may have overlooked?

When I got Cowboy, eight years ago, he had several issues. One was that he hated being bridled. It took me a week with a trainer to get a bridle on him. When I consulted his previous owner she said she'd had the same difficulty at first. Once he gave in to bridling, I didn't have the issue again. The second problem I had was that he was head shy. Anytime I'd raise my hand he'd pull away like I was going to hit him. I just assumed he'd been badly abused by a previous owner. The third thing was that he had issues with water. He seemed to have depth perception problems and would get very fearful. Before I got him, his owner told me he'd refuse to cross the pasture stream even when the whole herd was on the other side.

Were these early signs of a propensity toward HSS? I don't know, but I see them differently now.

As for the first obvious signs they started last year at the end of the season. There was a field we'd cross at the end of rides--it was quite bright and open. He'd start the vertical head bobbing as we entered it and until we exited. He did light vertical bobbing in the pasture. The first ride this season (spring '11) it had magnified 10X worse. When I introduced the riding mask, there was about a 95 percent improvement. The other day when the sun became very intense and he lost his fly mask, he had his worst episode ever and now wants to be in the dark stall.

There's also the issue of the broken P3 (coffin bone) with arthritis in the coffin joint. We took xrays at the vet check. Is it possible that pain from the coffin joint is a stresser as well?

3. How did the symptoms progress?

4. Were teeth, nose and ear issues ruled out?

Yes, by a vet check.

5. When was he last vaccinated?

His last vaccination was end-summer last year before the first onset of the head-bobbing. I hope it didn't have anything to do with that.

6. What things give him relief?

The only things right now are the semi-dark stall and fly mask. I'm going to try out his nose net next time we ride around the property. I'm not going to trailer him away right now.

7. What things make him worse?

8. How have I ruled out behavioral issues?

It happens in his turnout when he's not being asked to do anything.

Not when he's at a 4-5, but he's fine being led from stall to stall and handled in the stall.

I do feel the pressure now to finish training Beautiful Girl and Cia. I need a trail horse. Before it was like I was playing at training, now it's a bit more serious. I'm lucky to have them out there. They're keeping me connected to horsemanship at a time when I might otherwise have walked away.

I have mixed emotions about starting over. Cowboy was never a perfect horse...far from it. He was difficult at times, suspicious, reactive, but after eight years of riding together I developed a deep love for him, problems and all. There was a comfort in our relationship. Now I'm going to be starting at the beginning again on green horses. I know that this will probably be an exciting part of my life, but there is just a little bit of me that is also nervous and, of course, there's that part of me that's very sad to be leaving my partner, Cowboy, behind. It's the closing of a chapter I wasn't quite ready to close. Would I ever have been?
Posted by Linda at 7:38 AM