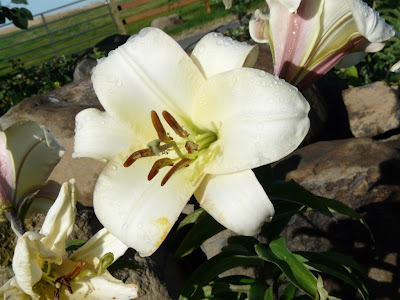 Blogger always broadcasts your first image in the newsreels, so I put a picture of lilies at the top to keep the next picture from showing up for those who don't want to see it. 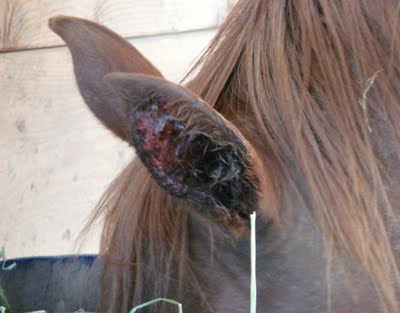 Did I say that I hate meat-eating flies? Where have I been that I didn't know there was such a thing? It's our fault. Since we fixed all the automatic waterers and brought in dry dirt all of the blood-suckers have been gone...which makes me feel really bad we didn't do that before they got to Red's ears.

I went out for his daily morning inspection and he'd kept his mask on and over his ears. After taking it off, however, it was immediately clear he'd been scratching them against something. He'd rubbed off the scabs and there was some swelling around the tips from the trauma. Of course, he won't let me touch them. The good thing, there were NO flies on it.

My husband washed his mask and set it out to air dry while I did the best I could to spray him with an aerosol antibiotic. While the mask was air-drying I let his ear air-dry, too. While the barn was open there were no stable flies anywhere to be seen and in the hour I sat with Red not one fly alighted on his wounds. The problem with this, however, is that if I leave the breezeways open, coyotes come in and kill our cats. In the chain of what's more important, Red's ear is certaintly more important, but I'm hoping to strike a compromise between having our barn kittens killed and healing him.

My hope is that the mask allows enough air to pass that the open areas can rescab for him. But I'm thinking I'm going to go out several times a day to open the barn and take off his mask and let the ear have some full exposure...just to be safe.

Cowboy did not have any of this. He only had the belly rubbing, no open sores. All the horses had the little flies going in and out of their ears when this was all at its worst, five days ago. Now, no flies in any of the ears. I don't think this will solve Cowboy's head shaking because that happened at times when there were no signs of black flies, but I do think the severe episode I saw last week had something to do with black flies. I'm comforted knowing that is not his new baseline and I probably don't have to worry about it ever being that bad again. I can handle a little head-shaking on the trail and, when it's at its normal level, a fly mask does cure about 95 percent of it. (Maybe he's just oversensitive to bugs?)

I received my latest shipment of fly predators a few days ago and in it was an insert that talked about how to get rid of the "last" fly. One thing they recommended is killing the adult flies. Fly predators only kill emerging ones. Also, it doesn't appear they kill black flies at all, but they do sell a trap specifically for black flies. I don't think that's our problem anymore, but I DO want to kill the adult stable flies. While we're out there today we're going to hang new traps.