Catching Up and Checking In-Late Summer 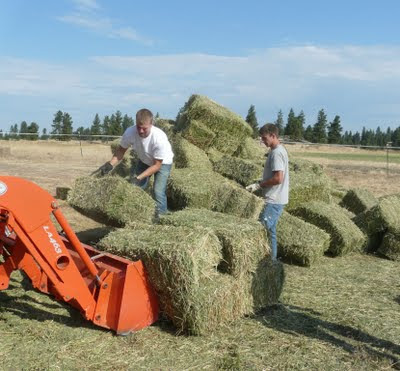 I'm on a semi-blogging break right now as I finish projects, tend the horses, prepare for winter and get the kids back to school. I'll be back around a little more when I get everything settled.

Here are some updates:

1.) Red's ear has healed and is doing well now. The biting flies are still out there, however, and continue to bite him in other areas of his body. I was told our local ranch store sold out of fly spray. Although, I don't know how effective the fly spray actually is with these buggars.

2.) Cowboy's head-shaking comes and goes, but is still very much there. His foot is also getting worse. My farrier told me I'd know when it was going down hill because he'd start holding it out more. He holds it out an awful lot now. Soon, it will be time to start considering my options, but not yet.

3.) We got our hay for the winter, beautiful alfalfa. We always store about fifteen tons of alfalfa in the barn because it gives us more for less space. There were a couple of winters that the snow was so bad, we couldn't get round bales delivered. The alfalfa is available in case of an emergency like that and to supplement their grass hay through winter and spring.

A word about alfalfa. I always buy second cutting. Farmers will try to sell me first cutting, but I insist on waiting for second. The first cutting usually has heavier stalks from having to wait for dry spells to harvest it (few and far between in the spring) and it often has mold from being rained on after being cut. The second cutting has more leaf, thinner stalks, less weed, and less moisture.

A testament to the fact that it is, indeed, higher quality, is that the same farmers who tell me they're both just as good (and all the farmers I know do this--I don't fault them since they need to get rid of the first cutting) will raise the prices of their second cutting at least $20 a ton. You can open a bale and see the difference. Stalky alfalfa is little better than straw. Give it to your horses, and they'll give you even further proof of which is better quality. They'll go to the second cutting every time. I will gladly pay the extra $20 a ton for the difference in quality--it's like night and day.

While we finish up our projects around here, I'll be largely AWOL from the blogging world, but know that I am checking in from time to time at your blogs and will be back soon.