Emergency! And thoughts on Buck 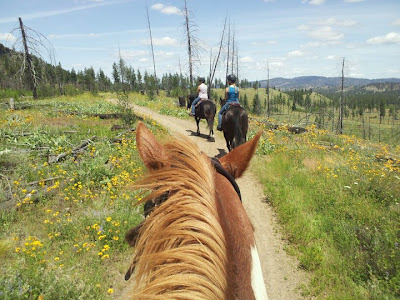 There's Been An Interruption

There's been a wee interruption in Beautiful's training schedule because of horse back rides and the 4th of July weekend. Last Friday a big group of us went out on the trails for four hours of fun. My daughter came with me for her first trail ride of the season. 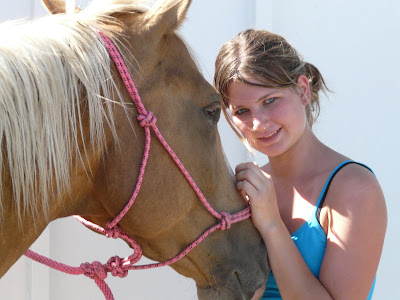 Her horse, Cowgirl, (above) is amazing! She can just jump on her and go, go, go! Cowgirl has been this level-headed since she was a three year old and they first started training together. Actually, she has been this level-headed since we purchased her as a weanling and hauled her up the snowy, treacherous roads of Hwy 95 through the heart and soul of Idaho. From the Southernist point to almost the Northernist point, Cowgirl, as a weanling, was the model of calm and intelligence.

This is what happened....

Cowboy and I were on one side of the trailer tacking up while Shiloh was on the other with Cowgirl. One second it was peaceful and quiet, I was brushing Cowboy, and the next second the whole trailer was being yanked around and Cowboy was starting to pull back as well. He was looking at me for some direction, but it was clear that he was 50/50 about going beserko.

The sad thing about emergencies is that you aren't given time to think things through. Hmmm...he's pulling back...I can do one of three things....number one..... Don't think so.

The good thing about emergencies is that you find you're actually pretty smart when you don't have time to think. When I saw Cowboy was 50/50 on the whole beserko thing, my hand was at the rope before my mind had time to catch up, and I untied him and had the rope through the loop and in my hand. When he calmed down (which took seconds rather than minutes) I tied him back up and went around to see what happened.

Disaster averted...she removed the broken saddle and replaced it with an extra we had in the tack room, and we were able to ride.

As you all know, I've been talking about the movie, Buck, for months and months now. Just when I was losing hope I'd ever see it, it came to Spokane. My friend and I met beforehand for a glass of wine and then my daughter joined us at the mostly packed theater.

I DO think Buck, like other great horsemen and women, has dedicated himself to learning about horses and doing the least amount to get the maximum results and communication--something he can model and teach others. His god-given sensitivity, a combination of his natural personality and having grown up with an abusive father, has given him an awareness of the horse that few people ever get. However, it also comes from dedicating himself to and spending almost all day every day with horses. Like a great musician, painter, writer, he put in the time and learned the essentials, and now he's a Master.

He has a quiet hand that comes from having a quiet mind. It was a joy to spend an hour and a half with him in the movie. I only wish it could have been longer.

Can All Horses Be Fixed?

If you haven't seen it yet, there was a large portion of the movie which covered the training of a "broken" horse--broken in the sense of having been ruined. How that stallion turned out to be so mean, we'll never know (we can guess), but it sure was sobering to witness.

It gave the movie an edge of melancholy because there was not a happy ending for that stallion.

Could Buck have worked him and got him to being gentle enough to ride? Probably. He did accomplish a lot the day he worked with him roping his feet. Could the lady who owned him keep him gentle? No. Even the paid trainer could not get anywhere with that horse and was almost killed in the process of trying.

It was interesting to me that the documentary ended on such a realistic note. Sometimes you don't get your happy ending. The director did not tidy it up or sugar-coat it for us, and maybe she accomplished what she was after. I walked out of that theater thinking of what a great responsibility I have to NEVER have any part of creating a dangerous horse. It is my responsibilty to make sure my horses develop in a way that is safe, stimulating, and respectful. It's my responsibility to make good choices.

Did you see the movie? What were your thoughts? I'd love to hear everyone else's reactions to it.

***Since I wrote this an article and interview were published that address the stallion. Here it is.

Together Time On a Bicycle Built For Two!

Do you want some together time with your son or daughter? I have an idea! Get them on a bicycle built for two and you will have them tethered to you. A captive audience!

On the 4th of July my husband and I took the kids on a beautiful ride along the river. At first they rode the tandem, but later we switched and I rode it with my daughter. 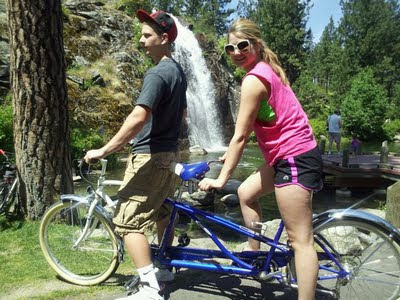 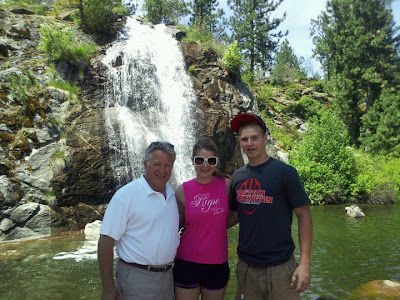 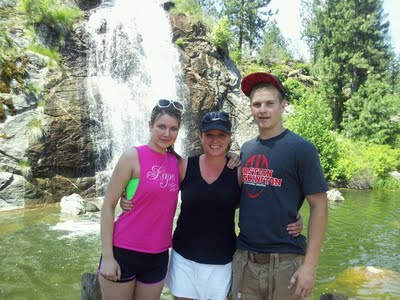