An Afternoon of Clinics and Cowgirls: Ride the West 2011

“Everything comes to he who waits…so long as he who waits works like hell while he waits.” Van Hargis, horseman at Ride the West.

Van Hargis- Click on link to his blog. You'll love it!

Alleluia, Brother! Amen! This is a horseman after my own heart--and my husband's, too, which is really saying something! I agreed with him so often I about shook my head off my shoulders.

His topic was "Whoa! Three Steps to Stopping. The three? 1.) Stop moving and relax your body. Of course, you have to have been moving your body in the first place for this to work. 2.) WHOA. (Most the time unnecessary for him since his horse stopped at step 1. There's a lot to learn about "whoa" and I do want to write more later. 3.) Support him with the bit. If all else fails pull back light and slow until you get the full stop then release as soon as you get it. And, he added a fourth for us, even though it wasn't billed in the talk, Relax and drop the reins...sit in your comfortable position.

Excuse me for this one, and I'll apologize ahead of time, but it was funny.

The great thing about horses is that they can shit and get at the same time. This was said as the horse was stopping to do her business as he was trying to demonstrate.

-A stop problem is really a go problem.

-Make them go, allow them to whoa.

-A bigger bit will not help you stop.

-Train a horse to catch you.

-When I start a horse, I don't want them to break a sweat. I want to break the sweat. (This is all about looking for the release and reward as early as possible).

-Where you release is what you teach.

-Tube of toothpaste example--more on that later.

All very good and I can write more about them in a later post. But the basics of the stop problem is really a go problem theory is that if your horse isn't going at the gaits you ask, you're not controlling his body so he won't stop either. He did a lot of demonstrating how our own energy, on the ground and in the saddle, moves our horses forward and stops them. 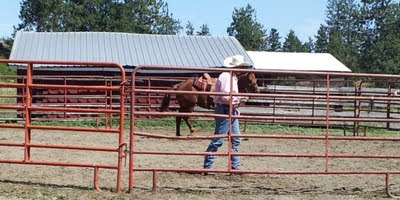 I didn't see much of this one, but I was there for this gate opening. The horse was obviously stressed every time it came to the gate, so he had the rider go out and lope circles and do something else with him, then go back and just stand--then take off again. Pretty soon the horse was very happy to sit at the gate and let her open and close it or whatever else she wanted to do. It was all very calm and pleasant. Good horsemanship.

(Pictured Steve Rother and rider at clinic, Ride the West, 2011) 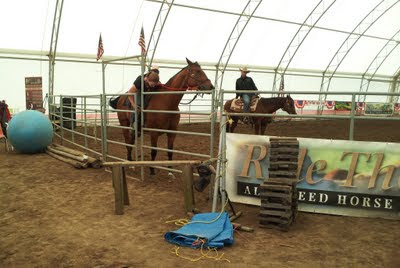 New Cowboy On the Block: Ethan Storey - Starting Colts on the Trail to Success

Storey is a young guy--I heard 21 and, as he pointed out several times, not yet comfortable speaking in front of a crowd. Still, he had plenty to teach.

A lot of his time was spent demonstrating the moving of the horse's shoulder and hind away from his/our safe space and keeping the horse from running him/us over in scary situations. There was some waving of the the flag he did that I wouldn't have done--waving on the opposite side of where he was standing as he was standing shoulder to shoulder with the horse. Basically, I wouldn't do it because I'd probably get killed, but he was able to handle getting run over pretty well and, as far as I know, didn't have any broken toes afterward. (Though I could be wrong.) Whether he's just a young buck with a death wish (kidding) or a master at preparing a horse for any and every surprise he might encounter, only time will tell, but I'm not adding opposite side flag waving to my repertoire any time soon.

However, that said, his work at yielding was superb and it showed when he climbed on the colt bareback with only a halter and lead and got him to move easily, and I mean easily, every direction with the slightest touch. All that preparation he did beforehand had BIG rewards. Sometimes it looked like nitpicking--getting a camel through an eye of a needle--as he worked that bubble to get the horse to maneuver here and there and over things from about two feet away with a loose lead, but he proved his point. The time-consuming, meticulous effort was worth it.

There was something else he said about how he wanted a horse's first ride to look--he said he wanted the horse to move. He started by laying half over his back and tapping him with his foot to get him to move his hind. Then, he slipped a leg over and was on top and doing the same thing--lots of yielding of shoulder and hind and moving all over the round pen. 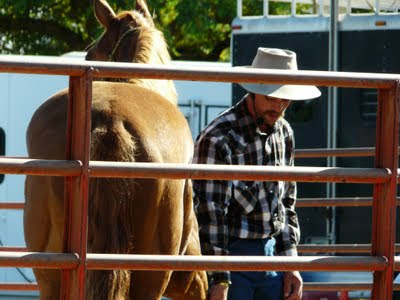 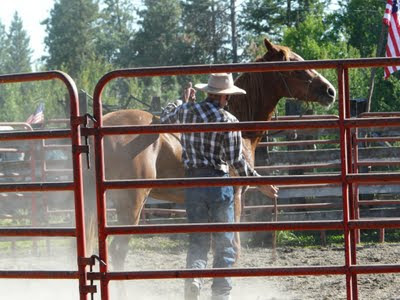 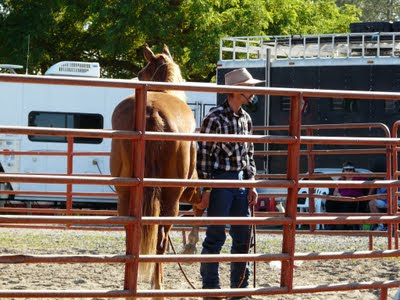 In my opinion there is no greater contest than this one. After all, what is a sport horse for if not riding in the countryside--opening gates, wading through streams and lakes, going across bridges, pulling logs and cows, and cantering up hills? This competition had all that. Here are some pictures of the competitors as they were being timed. 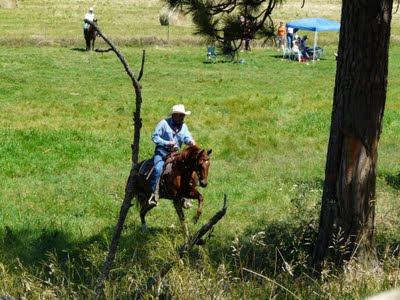 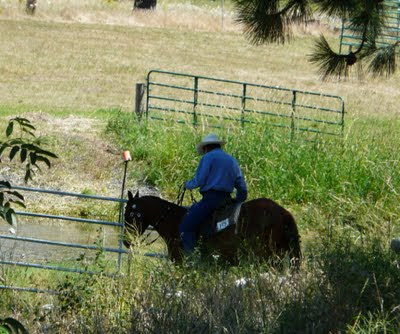 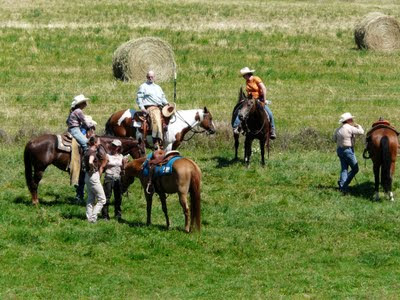 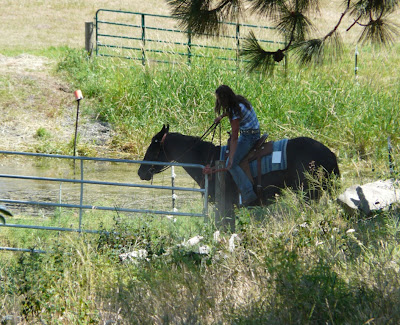 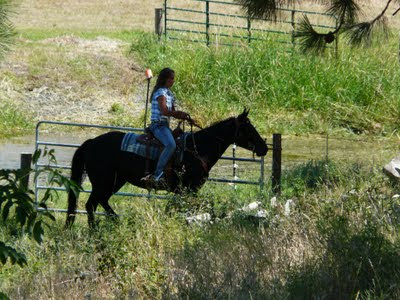 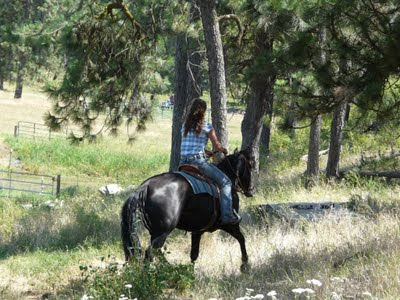 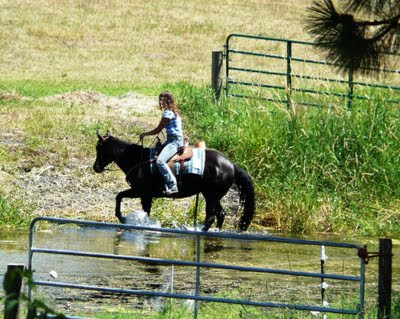 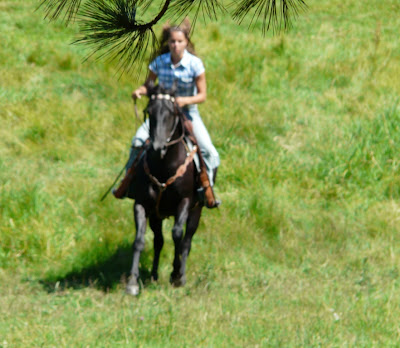 Here's my hubby watching. A story about him...we forgot to bring chairs and had to stand through 3 hours of clinics in the 90 degree heat (yes, we finally got heat). My sweet husband crouched on the ground and offered me his knee. I took it, happily. After a while he offered me the other. Then, he about buckled over in pain and it was all over. But what a SWEET, sweet thought. 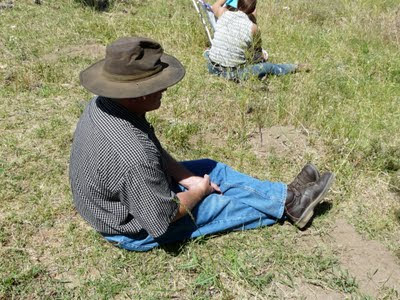 And last, what is a fair without vendors? One of the vendors specializes in restoring Vintage boots and buckles. I got this fabulous pair of Frye boots from (we're guessing) the '70's, for $55.00! I got this beautiful buckle for $25.00. I took a picture of her phone number, just in case. ;) 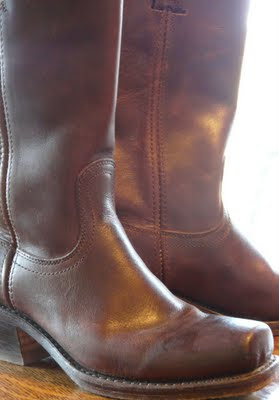 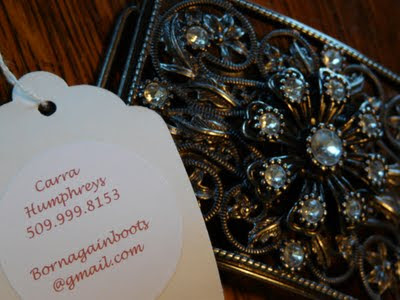 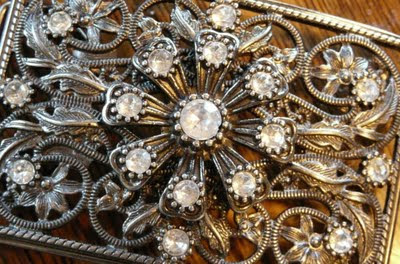