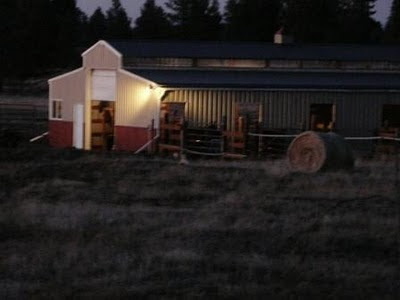 Stop the movie, I said. I hear something. After a brief discussion about whether what I heard was in the movie itself or somewhere near us, we paused it, and he walked over and opened the window. What I'd heard was, in fact, real, it was the wind blowing at 40 mph with 50 mph gusts. It was squeaking swingsets, blowing over patio chairs, and occasionally, lifting our house off its foundation.

Of course, my first thought was about the horses, so I went over to the window myself and strained my eyes in the dark to see what was happening with them--no horses could be seen.

I hadn't known it was coming, so I'd left them all out, and it was obvious, with my nervousness escalating, I needed to stop what I was doing, get dressed, and go to the barn to see if BG was hightailing it back to Beaty's Butte with the rest of our herd in toe.

My husband got dressed, too, because when mama's not happy....you know what I mean.

We got on the 4-wheeler, zoomed on out to the barn, and the first thing we saw when we got there was our, what has lately become, wild mare bunch--Cowgirl chasing Beautiful around the turnout--and three fat geldings eating calmly, circled around one of the two fresh roundbales in their corral.

Mares in chaos, fat and happy geldings. What is not new about this picture?

Besides the wind, they also predicted rain, and not wanting the mare fight to escalate and/or someone get hurt out there or run through a fence, I wanted to get all of them back into stalls. Some were easy, we just opened the doors and in they ran, however, Beautiful was hestitant and had to be lead in. When she did finally go in, guess which horses she was sandwiched between...Cowgirl and Shadow!

Of course, the mare fight continued, with Cowgirl, who is a tall horse, easily reaching over the bars of the run and biting her as she tried to get water. She just kept threatening and threatening her. So, we gave them all food thinking that would settle them down.

Oddly enough, it made things worse for BG. She started to back into each side of her stall--Shadow's wall and Cowgirl's wall--and kick it--HARD. She kept doing it and doing it--even after we'd moved Cowgirl to another. I spent a little time talking to her and calming her, and she finally settled down to eat, even as the wind threatened every loose thing in the barn: rattling and pounding at the doors, blowing woodchips and hay. It was a wicked windstorm.

My husband had already left to go back to the house, so I was out there alone. Eventually, I felt comfortable enough with the mood in the barn and the stall arrangments, so I decided to head back, too--exiting the barn door into the dark and the wind and walking toward the 4-wheeler.

All of a sudden, from seemingly nowhere, there was this loud Meereauwww, and there, in front of me, was a wide-eyed, white cat, tail flaired, arms and claws---all four--spread out, clutching the seat.

It was one of my barn kitties also terrified of the night. I could barely pry her claws off enough to get her back into the barn clinging to my coat. I had to lock she and her sister in the cat house so she'd stop following me. I'm pretty sure, last night, she would have run behind me all the way back to the house!

Before I left, I looked back over the calmed chaos that was my barn, and turned off the lights once again. Then I rode back, found my husband, and continued to watch the last hour of Ghost.

But today, it's all beautiful out there: sunshine, above freezing, a predicted 47 degree high for today (yes 47!) and horses at peace with another, grazing together in the north pasture. Even Cowgirl and Beautiful are together this morning, grazing side-by-side, leaving me to wonder....is there a scene about wild horses and a barn and a terrified cat in the movie Ghost? Did last night really happen??
Posted by Linda at 7:21 AM