The great thing about horses is that they take every day for what it is--a new story. People aren't usually like that. We like to hold onto old stories...about ourselves, each other, our animals. We like to say THIS is who I am, and THAT is who you are. So there.

But that's not reality. We are not who we were yesterday. We are not fairy tales, or cliches, or caricatures--all good and pure or all mean and evil.

Last week I had an epiphany--that I was holding onto a story or, more accurately, a fairy tale, about Beautiful Mustang. I thought it wasn't good for her or me or our training, and since it wasn't good, I decided to let it go.

Each day, of the last six days, I've devoted to one of the major foundational training areas: Clipping, Tying, Leading, and Loading. In my mind, I can't go further until these are accomplished. Each one of the major areas has potential for things to go wrong. I don't want BG to have negative baggage about any of them, so I didn't want anything to go wrong.

The first two days were clipping with the electric clippers--and a little tying--I was patient, and it took a while, but, in the end, it went great (more in the movie). Then, there was a day of tying while I cleaned stalls (also shown in the movie). And finally, a couple days of loading and leading. I had exposed her to the trailer last year, but she never actually got in. This year, we started at about the same place we left off. (Horses have good memories.)

There isn't much video of that first day because my husband and I were alternating trailer duty with an approach/withdraw/gentle pressure and release strategy. Finally, after about an hour--or maybe forty-five minutes (I didn't time it) we decided to end on a positive note and feed her a little grain at the trailer's edge.

Surprisingly, at about that time, while I was at her side, she had a slack rope, and we were relaxed with no expectations, she decided to put her front feet in and smell around. She put them both solidly in and sniffed the dividers, the roof, the ground--as if she was sizing it up to see if she'd fit in there and be safe. Then, just as calmly, she stepped back down, and we made a big, happy deal about it.

My husband decided to move back further in the trailer with the grain and see what happened. With the rope still slack, and no pressure whatsoever, in she walked, slow and gentle, and stood there eating for about five minutes. She looked around, back at me, out at the other horses, and she was as calm as could be. I said, Let's try just backing her out since she's so calm. And, out she backed, like she'd done it for years.

Day #2 is on the video. How did she do the second day? Did she load without grain? What were her memories from the first day?

This is the end of week #1--I learned new things about Beautiful. I trust and respect her more than I did at the start of the week. I feel more confident about her ability to think things through. Now, we're on to week #2 and I have plans, but few expectations--because every day is a new day--as it should be. And, if you hadn't noticed, that's my new motto. I've used it many times before, but now it's moved up to motto status. Or, said differently,

To truly enjoy life, to see yourself and others in fresh ways, you must be willing to let go of the stories that keep you tied to the past. Linda Kohanov, Way of the Horse.

***One last BG update--it took two weeks, but she is well-established in the herd now. She occupies a comfortable position second to last (Cowboy is the good-natured Omega, the confidence builder, and babysitter--which, btw, has great benefits for him).

Just yesterday, she was let into the round bale circle with the whole herd. Before that, she had to wait until they were all done. How she accomplished the feat was funny to watch. She went barrelling around them at break-neck speeds, bucking and fussing. They all stood there calmly, watching the spectacle. Then, as if to put an end to it, they signalled some passivity or permission, she walked in slowly, took a timid bite, and they all went back to eating...together.

Now, the herd is six.

I'm so proud, proud, proud of Beautiful. I want to talk about her all the time, but I get a lot of blank stares, the not-to-subtle point to change the subject.

Here she is this morning, standing her ground against the snow, in-line with the rest of the herd. Isn't she amazing?!? I love her. 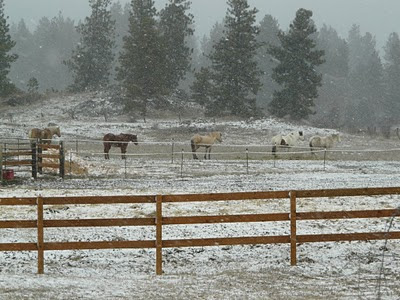