TJ Holmes Interview: How Did PZP-22 Affect the Mares? 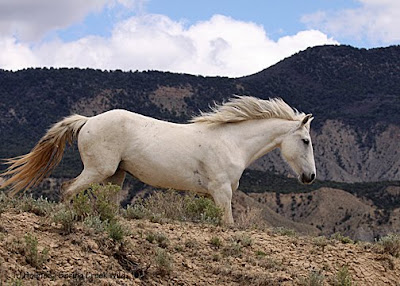 (Above: the mare, Alpha--still nursing after 2+ years)

One of the questions I asked TJ, in the interview, was whether or not PZP-22, the vaccine given the horses she watches in the Spring Creek Basin, changes the behavior of the herds. This is a vital question because part of the guidelines the scientific community followed in developing a wild horse contraceptive included this: The vaccine should "not influence the social behavior of the horses."

Some, who do not endorse PZP say it does change the social behavior, so I was very interested in what TJ has observed in her herd.

Question: From your observations and knowledge, does PZP change the behaviors of wild horses?

Given that I'm observing a very small herd that has been gathered frequently in the last decade, I've found it hard to determine a baseline of normal behavior for my horses. Basically, I've decided to try to determine their behavior as "normal for them." The more I considered this question, the more complex the answer seems to be. 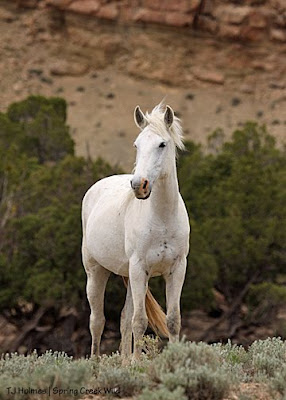 In 2008, I observed Alpha being bred in different months - by the band stallion and by a young stallion I've always assumed was his son. This year, the band fractured socially, but they're still together physically (except for four youngsters and a few bachelors). All three mares have a single stallion, including Alpha. Five mares were given the PZP-22 and released after the 2007 roundup (all the released mares were given the PZP-22).

These are the mares that got the PZP-22: 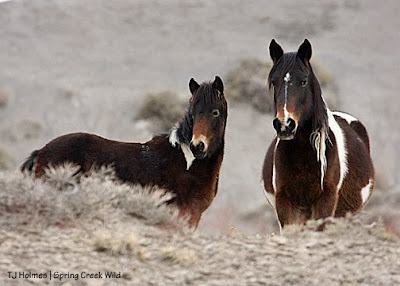 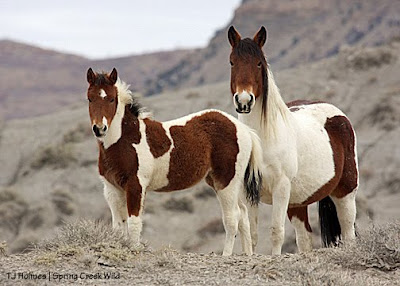 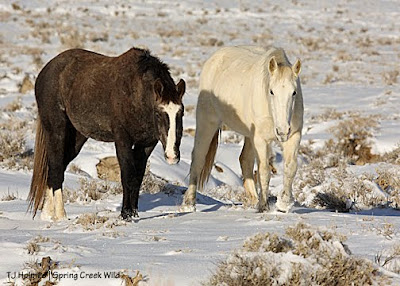 Alpha is an older mare, but I don't know her exact age. Did she have trouble conceiving? It was her I observed being bred by at least two different stallions. She has not had a foal since Storm in 2008. Again, age ... or atypical long-term effects of PZP-22? I don't know. Storm was still nursing as recently as last month - at 2+ years old (I'm not sure whether it's habit, comfort or whether he's actually getting anything, though Alpha's udder does seem fuller than it would be if she wasn't producing milk). Alpha is very healthy and in excellent condition, and Storm is as big and stout a wild 2-year-old as I've ever seen - so not only is the mare healthy and thriving, so is her colt.

The three mares from Sand Wash Basin received PZP-22 during their roundup, before they were trailered to Spring Creek Basin: They stayed together, by themselves, from the time they were released in late October until December that year, when I found them with Kreacher, previous low man on the bachelor totem pole. 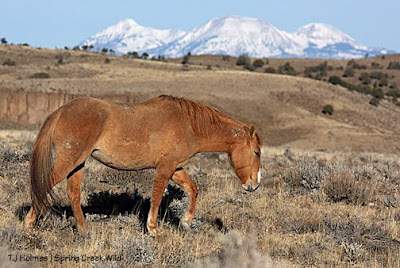 (Kootenai, Raven, Mona and Kreacher--Corona is between Kootenai and Raven) 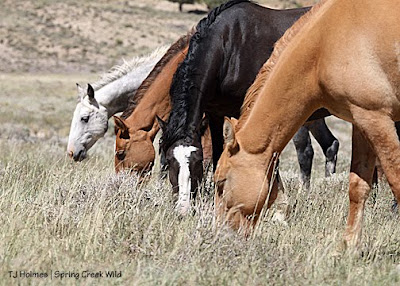 In spring 2009, Raven, who apparently went off to have her foal (obviously sired by a Sand Wash Basin stallion) was picked up by Duke, and the three of them spent several months together. 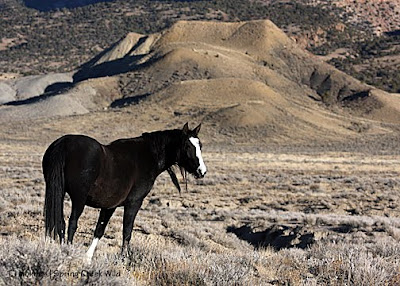 Duke later lost them back to Kreacher, and they're still with him. Mona ended up with Seven in September after she had her filly, Shane. 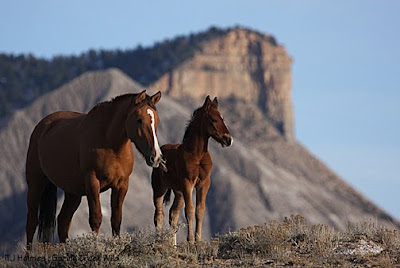 I want to address the "rape" allegation. The only stallion I've ever seen "chase" a mare - two - until he bred them was Seven, completely unrelated to fertility control - one mare (Molly) was bred by him on her foaling heat (about a week after she had Liberty), and the other (Roja) has never been treated with fertility control - I observed him chasing and mounting Roja two full months after she had her foal this year. I want to make this perfectly clear: RAPE IS ABOUT DOMINATION, not sex, not procreation, and it is PURELY a human construct.

I have NOT observed the frequent movement of horses between bands like I've seen and heard about in some other herds. I don't know why this is. Basically, I have not seen any massive, dynamic-altering behaviors among the horses treated with PZP-22 in Spring Creek Basin, certainly not enough to alter my feeling that PZP is the humane alternative to roundups and removals. While there are many guidelines of mustang behavior, the horses are individuals, and their behavior varies.

You can follow along with these horses as TJ documents them day to day, year to year--sunshine and snow. Spring Creek Blog

If you have any questions for TJ, please leave them in the comments. I'll start off.

Hi TJ--It appears, from your information, that the PZP-22 wasn't very effective in controlling reproduction. Do you have some thoughts about why it wasn't?
Posted by Linda at 10:43 AM