Whew! There's a lot going on in this post. I haven't done an update in a while, so here goes...

My old compact camera died, so I needed a new one. It's just too much to ask to cart around my big camera on walks and normal trips to the barn; so I relied on the pocket-sized one.

I didn't research the purchase at all, thinking technology is so great, all the cameras out there should be good. Right? Wrong! I bought a Sanyo and brought it home, took a few pictures, and they were all blurry or dark. I tried the video, it was choppy and poor quality. It is hard to imagine a poorer quality camera anywhere on this planet. And, when I did finally research it, all the reviewers agreed with me. So, I returned it. 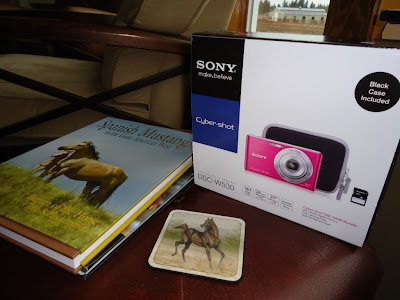 (Picture is of the new camera.)

What I found instead (at Walmart) was this package deal--a Sony Cybershot with a case and memory card for $119.00. Just the camera alone was being sold at the same store for $149.00. Very strange. The sales person is the one who told me about it. She was like, hey, we just got these in--it's a great deal--this is what you want. She was like my bookie, but sure enough, she was right.

The camera is teeny-tiny, but takes wonderful picures. The menus are easy to use, too, and it has this setting called "Sweep Panorama Mode" where you point and click while you move the camera slowly over the view until the arrow directs you to stop. Then, the camera--somehow, magically--seams the images together into one large panoramic picture--like this: (click to enlarge it)

I've never seen anything like it before, but it works! 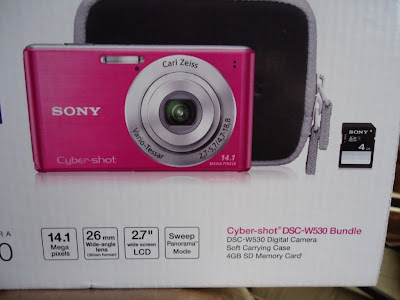 Like everyone else, my husband and I have been trying to get in better shape. Usually we take turns on the treadmill and doing strengthening exercises, but since the weather has been warmer, we've been out walking again.

I think that walking outside is better for the mind. I feel happier, less hungry, and I also feel that I've gotten a better workout than on the treadmill. The time goes by faster because I'm able to talk to my husband and watch and concentrate on the dogs.

I also got a walk in with a friend--although, we were supposed to be riding our horses. 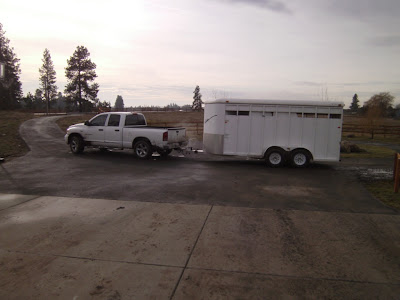 But, rather than loading my horse, I loaded my pony--Riagan. (My friend wasn't up to trailering out of the mud.) 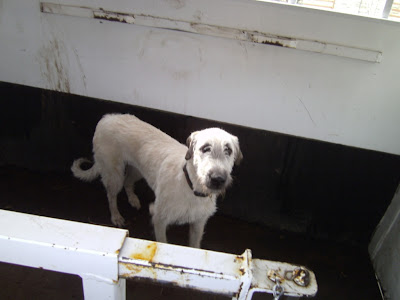 Cutting back on food has been another matter. I really like food. My favorite winter fare is an odd combination (I picked it up years ago and now my husband is also addicted) of french dip with swiss cheese, onions and peppercinis, french fries dipped in tarter sauce, and red beer (Bud Lt. and Clamato). I also enjoy wine and cheese. This odd combination of food and drink is my downfall in counting calories.

Since all of this is hard to give up, I've compromised by cutting my portions in half. So far, the scale hasn't moved much, but I do feel like my clothes are fitting a little better. At least I'm not gaining weight anymore. I was in the never say no mode--chocolate (yes), cake (yes), steak fajitas(yes), pasta (yes), seconds (yes), thirds (yes)...you get the picture. I'd love to see the scale start moving down because, when it does, I'm going to reward myself with a new cruiser bike, but I think it's premature to expect that. 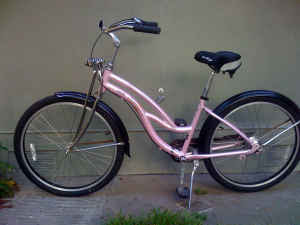 (Cruiser bike, here I come! I can't ride a horse all the time!)

Everyone's taking turns walking Beautiful back and forth to turnout--myself, my husband and my daughter. One of the things that used to really scare her was when we'd throw up the large barn door when she was on the lead. It would frighten any horse. I worked with her last week with just leading back and forth into the barn and standing while that door was opened and closed. She got to the point where it didn't bother her at all.

As for tying, I need to do more of it--lots more. She hasn't developed patience and maturity being tied. Instead, she paws the ground, prances around, and whinnies. We're going out today to see if we can dig a hole with the auger and get a new tying post set in the ground outside of the arena--and maybe one right in front of the barn, too. I don't have a single tying post on this property (besides the horse trailer) that doesn't have something in front of it--and I want one where she can safely move around, paw the ground, etc, but will be okay if I leave her there for a while as I work with the other horses. I want to be able to keep my eye on her no matter where I am.

The way I'm talking about this movie, Buck, you'd think I'm a huge Buck Brannaman fan, but that's not really the case. I don't have a favorite trainer. I've read and own many books, but I haven't ever thought--this is the one. I like them all. I feel like each has something special to bring to the art of horses. Like music, one may be a Beethoven, a Mozart, an Enya or The Beatles.

But when I read about this movie, I can't help but be excited about it. Here's a review from the LA Times that came during the Sundance Film Festival.

Quotes from the review:

Can a documentary cross so many cultural, geographic and demographic lines that it could become a mainstream, mass-market phenomenon, all without a political agenda or shock value?

If ever a documentary had that everyman potential, it is "Buck," ....

Of all the movie screenings I've been to in the festival's first four days, no film has gotten as passionate and as extended a standing ovation as "Buck."

I first realized there was something deep going on when the tough guy in rapper chic next to me was wiping away tears at one particularly intense moment when Buck tries to gentle a horse so wild it attacked another trainer in the ring. There's also plenty of humor, with laughter rippling across the house at the homespun wisdom that seems as natural to Buck as sitting on a horse.

The movie came to the festival without a distributor but as of press time was sorting through multiple offers.

But beyond that, Buck's story seems right for the times: a decent man whose common sense cuts to the heart of the matter, an ordinary guy who's made an extraordinary life despite the odds. A guy who works hard for the money. The kind of story that would play anywhere, but definitely in Peoria.

I think it's going to be great.

Well, off to take on the day! Got to get some posts set in the ground, call around about sand prices for the arena, take my son to get his driver's permit, clean stalls, wash the cars, and another walk with the dogs this morning.

Hope you're all having a wonderful weekend!
Posted by Linda at 10:19 PM