I Want Buck! I want Buck! 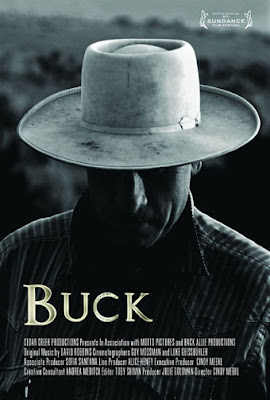 Oh, how I want to see this movie. It can't get here fast enough.

A documentary about Buck Brannaman. I think, almost every horse person knows who he is and have either read about his methods or attended his clinics, but non-horse people know him from the movie, The Horse Whisperer. The character Robert Redford played was modeled after him.

In the trailer, he says things like I talk about all the time on this blog--horses are a mirror to our souls--and the other great truism--if you get to know a horse, you get to know its owner. Also, fixing horse problems is really fixing human problems--what people did wrong training their horses.

When I came back to horses, as I've shared before, I learned that I'd become a fearful person, and I think that is a common theme among women. You could look at my horses and know that about me because I'd take a perfectly nice horse and make it a monster without knowing I had. I'd learned to tune out threats to my welfare so well, that when a horse would threaten me, I wouldn't pick up the signs until they were so obvious they could have killed me.

I was incredibly lucky to have a trainer, and a friend, who boarded at the same place I did. She was like my own personal Buck Brannaman--and she'd trained a bit with him (clinic) and others like him. Nowadays, though, almost every trainer is like him--so that's not saying much, I guess.

Anyway, having her there with me, day to day, probably saved my life.

You may wonder, How do you make a perfectly good horse into a monster? Do you beat it? Starve it? Taunt it? Maybe that would do it, too, but guess what else does?

When I came back to horses, after a ten year hiatus, life had beaten me down--I was just a shadow of my former self as a young woman. I definitely didn't need a horse beating me down, too, so I tried to make friends with my horses--a non-confrontational approach, you could say. I hoped they'd love and respect me because I loved and respected them.

This is how it would look in practice--a real-life example from my What Not To Do annals:

I'd be walking my horse from the outdoor turnout to the stall--a distance of about 1000 feet. My horse would be on a lead--I'd have it somewhat tight (like I was controlling him with my strength) and he'd move ahead of me a small bit--his shoulder slightly in front with his ears pinned back. In this position, I felt like I still "had" him--I was almost to the stalls--and I wasn't going to make any waves because I didn't want another "fight" in my life.

She's also walking a horse back from another direction. Her rope is slack and the STALLION is walking behind her, relaxed, head down, eyes wide and gentle. She stops. The stallion stops. She sees me. She yells at me. Do you see him disrespecting you?!? Don't let him do that!!

I look at my horse, who is now looking at her. He knows who she is, and when she's around, he starts acting better. Huh? What? I think.

So, I can't just sing Kumbya with my horse and have peace? Shoot! I'm actually going to have to look at him with my peripheral vision and watch for these signs? It seems so nit-picky!

Wrong. When I finally started taking her advice, opening my eyes to see when my horse was challenging me, I could correct him with a gentle strength--not a display of fake prowess--and, after time, as my courage and my self-preservation increased, his trust in me increased. A couple years later, my horse was and still is walking behind me on a loose rein, head low, eyes gentle. Today, I feel like I do surprisingly little to correct any of my horses because what I do DO is early and appropriate.

So, I can't wait to see the movie. I know I'm going to LOVE it and learn a lot from it, and there's little I love in life as much as learning about horses.
Posted by Linda at 8:56 AM