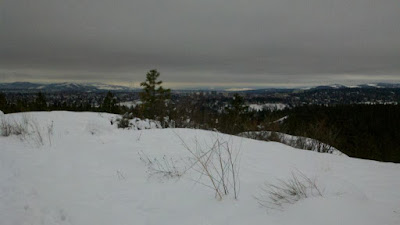 "When the deer and elk can hear again each needle sway and cold twig subsidence. What is the name of a silence that deep?"

Robert Wrigley, "None Shall Sleep", from his book, A Beautiful Country.

Have you ever walked the same trails your horses carry you down? Well, I snowshoed them several times since November, and have discovered a new respect for the work my horses do.

Snowshoeing is about the most peaceful experience. First, there's no one out there except you. It's cold, the roads dangerous, everyone in town is mostly at home sitting around fires. But you bought snowshoes, hot pink, aluminum Yukons, and poles, and sturdy Columbia boots. You've dug out your snowboarding gear: pants, gloves, goggles, silk underwear, socks, gator and hat, and you've dressed, layer after layer, in these items. The house is now hot and unbearable and you're relieved to get out and move in the 20 degrees and snow.

That has been me since before Thanksgiving and the record-breaking snowfall. I've been walking up and down the same trails my horses ride every spring, summer and fall. I've walked the same hills, traversed the same paths--and sweated my butt off.

I know every corner of Palisades Park, but mostly from about four and half feet higher, and this fact has not been lost on me each time I've gone out to snowshoe. Dr. Phil's words came to mind once or twice--the ones relating to how much exercise you get riding a horse...

"That's great for the horse", responded Dr. Phil drolly, "but what
good is it for you?" 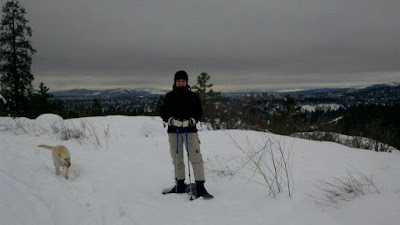 Snowshoeing gives you the same presentness that horseback riding does, but because you're lifting your foot through the snow and having to raise it higher, it's an intense workout, too. There's the same quietness over new-fallen snow (the crunchy frozen snow is actually quite loud) and the same feeling of being in unity with the natural environment. Your mind has the opportunity to wander, you think big thoughts that you probably won't remember afterward, and you get an excellent workout.

Like riding a horse, you'll have a better experience if you have the right gear. There's really no limit to the degree of cold you can endure, if you have the appropriate clothing. All the times I've gone out, it was never above 32 degrees, but I always broke a sweat and got hot.

I'm lucky to live in Spokane where I'm surrounded by thousands of acres of parks. In what other city could I live and only have to drive ten minutes to the downtown or three minutes the other way to forests? I love this city because it does provide so many choices.

Last night, my husband and I shopped downtown for Christmas presents, had dinner and listened to a poet read his work at a local bookstore. Today, we sit and write and look out at our horses. This afternoon, we'll load up our snowshoes and walk the lonely trails. 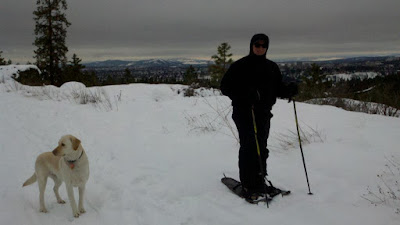 You'd think, in a city this big, there'd be lots of people out on their Nordic skis or snowshoes, but in fact, we never see a soul. We actually like it that way, but it does make you wonder why. Why does snow stop people? Why does it keep them in? The world is at it's most beautiful when it snows--it's white, it's romantic, it's hushed.

There are secrets out there in the winter woods--but you'll only find them by foot. You can certainly find them on horseback--or, as I'm doing recently, on your hot-pink, aluminum Yukons.
Posted by Linda at 10:21 AM