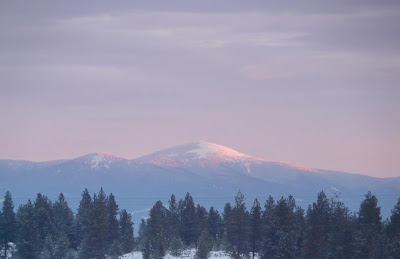 What a beautiful morning! This is the view of the mountain as the sun cast it pink.

After sharing my morning pictures, I want to give a brief run-down of Beautiful's training to-date, in preparation for the saddle-training that will occur this spring. And, if you haven't had a chance yet, please read TJ's interview from the last post--It's Part I of our discussion about PZP--the Mustang Contraceptive--something I'm curious about, especially if it can someday end roundups and make cattlemen (and in the case of my good friend, cattlewomen) happy, too. She's been kind enough to share her knowledge and experiences with us, so please take a chance to say hi to her. 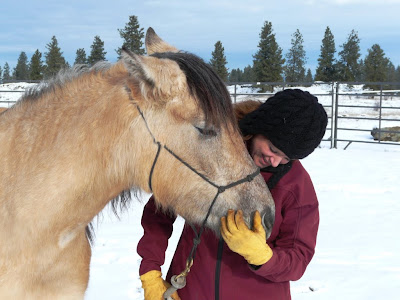 We were out waiting for the farrier this morning (my husband and I) but turned out, we had the wrong day. So, he was kind enough to take some photos of me with my Beautiful Girl.

I like to blow in her nose--she loves it, too. It's our weird little thing. My cattle-woman-friend, Elaine, taught me this a long time ago with a batch of colts we had. She said they like it, and ever since, I've been blowing in my horse's noses. Does anyone else do this? Or, am I crazy? 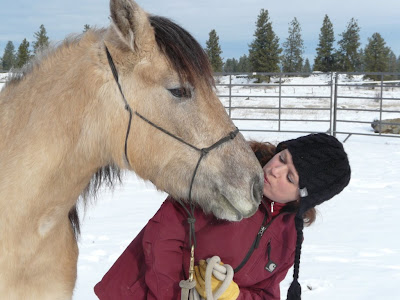 She was very playful during our photo shoot. See the tassles on the sides of my hat? She decided to grab one in her mouth. We all started laughing pretty hard. Didn't get it on camera. 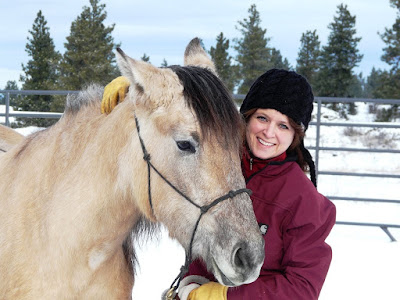 I titled this one, What Not To Do At Home, since I've given her a bunch of rope and walked behind her. However, I tend to do it a lot with her because she's never given me reason to think I'd be in any danger. She's never, never, never offered to kick or strike me. 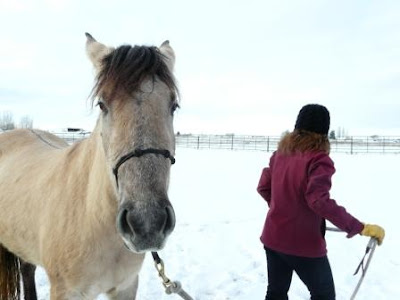 Fat and Happy, as always. 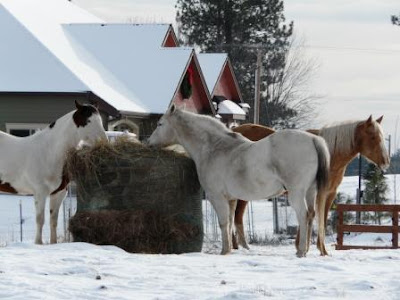 Something fun I did with a picture I took of Riagan last night. 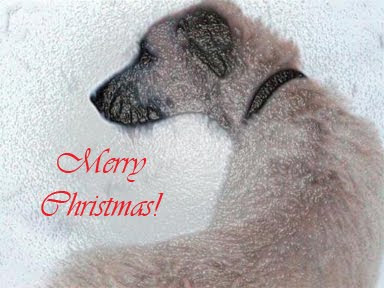 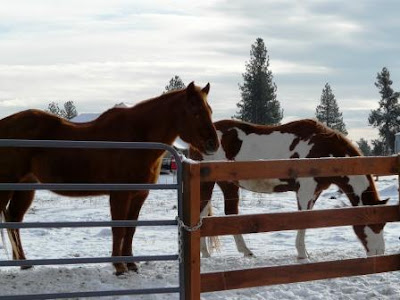 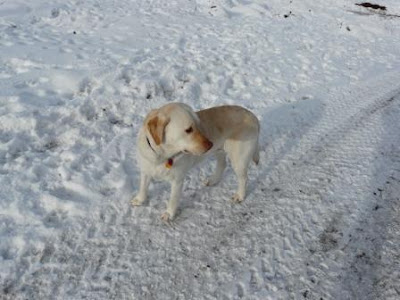 One of the barn kitties Lea, of Lea's Mustangs, gave us. 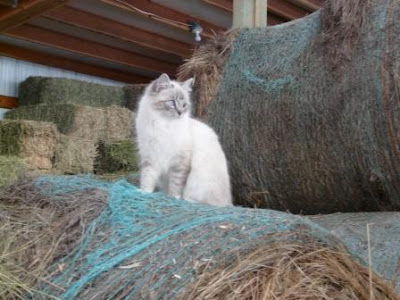 And Riagan standing guard while I was out at the barn. Our animals surround us utterly and entirely when we're outside, and we LOVE it. 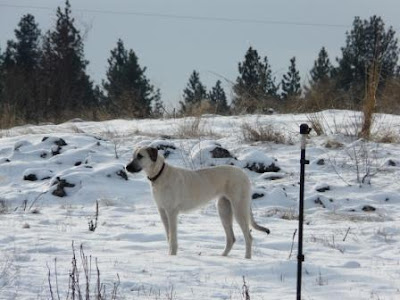 So, here goes...What I've done (and not done) with Beautiful:

1. When I first adopted BG, I worked with her at great length to desensitize her for the farrier. Having been wild and never touched by humans, the first weeks toegther were all about, I'm not going to kill you.

Eventually, these lessons included all the basic things--touching all over her body, haltering, leading, tying, picking up all her feet and tapping them with a hammer, roping around her legs, flagging, waving around her head--basically anything I could think of that might happen to startle her when the farrier was underneath.

2. Last summer we worked on trailering, but didn't get very far. We only got her to the point of stepping up. So, obviously, this is a BIG hole. I don't know why I didn't work harder with her on this one since it's so important and it's usually what I do right after haltering and tying. For some reason I was negligent in this area with BG. I think it's because, right as we started it, I got distracted with the riding season and put BG on the backburner.

3. Clipping--I only bought a decent pair of clippers last spring, before that I always borrowed them or used scissors. So, I started her on clipping when I got them. She got to the point of allowing me to clip her bridle path and her feet--the only areas I really wanted to clip. But she could use more clipping practice.

4. Blanketing and saddling: From the beginning, I worked with throwing things over her--blankets, ropes, rain coats, basically anything in my hands. She shows a great deal of trust in this area. She's also had my little saddle thrown over her, but not cinched.

5. Bending and giving--I've been working with her on hind and front giving and bending since she was a yearling. She'll disengage in front and back and very easily back up with just a little pressure to the nose, basically, a tapping with the halter. But, as you know, this is something that goes on all the time to soften them up, and they have good and bad days.

So, there you go. I may have forgotten a few things, but that's basically it. She's not good at tying--she paws the ground and is very fidgety. She doesn't trailer load well yet. She needs to experience moving out with something (a curcingle) cinched up, and ultimately she needs to pack the saddle and be ponied off of a big horse so she gets used to seeing someone above her.

I did order a book at Andrea's suggestion: The Modern Horseman's Countdown to Broke: Real Do-It-Yourself Horse Training in 33 Comprehensive Steps I flipped through it online and read that the entire course is designed to last 1 year. I'm thinking, though, since I've been working with Beautiful for 2.5 years--most of the territory should be covered. Still, I'm curious about the finishing lessons, and I want to make sure I've done everything in my power to have a productive and safe first ride.

If I've learned anything with horses all these years, it's that you NEVER know it all, there are just too many variables. To put it better, there are as many variables as there are horses--and no two horses are the same. Through the years, I've read everything I could get my hands on--and I'll continue to do the that as long as I have horses.
Posted by Linda at 8:16 AM