In the Beginning....Fate Brought Me a Mustang 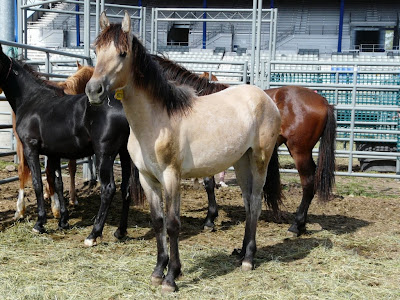 I've had Beautiful now for two and half years. I adopted her when she was about a year old. I didn't purposely set out to adopt a Mustang, but fate, as usual, had other plans. 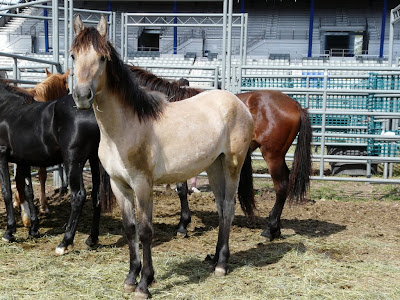 It had been a sad year for me with horses. You know how you sometimes pinch yourself and say, "Wow, nothing has happened to my horses in years--they're healthy, happy--everything's GREAT!!"?

Then your horse friends (who know you've just cursed yourself) hit you and tell you never, NEVER say that. Sure enough, about that time, just because you bragged to the universe about your good luck, everything goes wrong.

That was the year Cowboy broke his coffin bone and I lost his twin, a colt I'd raised from a weanling that was his nephew, to colic.

I'd gone through the rest of the year in a bit of shock and mourning....then, without any prior planning, I came around the corner at Ride the West, a horse fair here in Spokane where I was volunteering, and saw these sweeties--the BLM had brought in-- 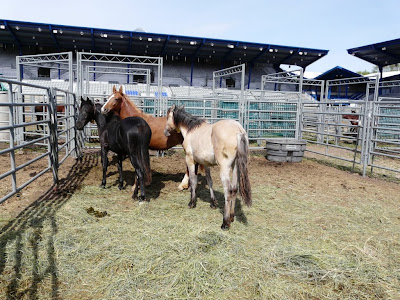 It was the first time I'd felt excitement like that in a long time. When you're suffering a string of bad luck, you tend to shut off excitement--hope--emotions in general. But the Mustangs snuck by my defenses by first appealing to my sense of curiosity, then wonder, and finally, amazement. I'd NEVER seen wild horses before, so it was like being in the presence of gods--in this case, sad ones--with collars and numbers around their necks. 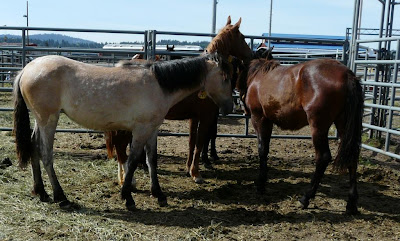 Still, I didn't want a Mustang--I didn't want another horse at all. I had plenty at home. So, my daughter and I and a friend who was with me, all stood around and watched the proceedings.

Now, I said "fate" was involved, and I believe it was because guess what time it was when we came around that corner and saw those Mustangs? It was mid-morning on a Sunday. And guess when Mustang auctions end--well, mid-morning on Sundays.

Quite quickly, we realized no one was bidding on many of the Mustangs there and the quiet little filly who caught my eye--shockingly enough,she wasn't going home with anyone unless I stepped up.

I did. I signed the silent auction paper, was whisked off to the BLM tent by a sweet volunteer who'd been bending my ear about how wonderful Mustangs were--money passed, papers were signed, and the next thing I knew--my husband, my daughter and I were backing the trailer into the chutes to pick up our Beautiful Girl. 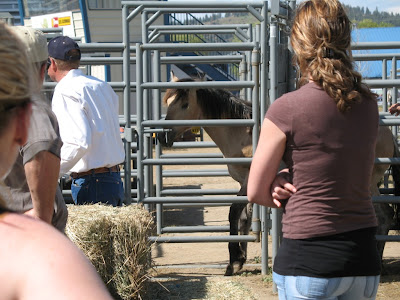 You can't begin to imagine the doubts that went through me as I saw her proceed through the panels. I so did NOT feel prepared for what I was doing, what I was embarking upon, but I continued forward anyway...one step at a time...much like she was doing as she went through each open gate toward a fate she could not comprehend. 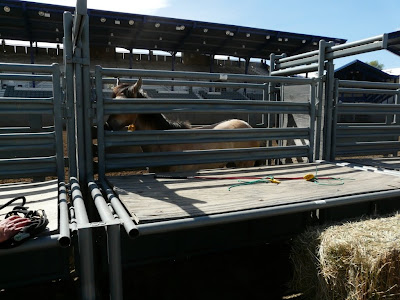 Beautiful had been captured late fall of the previous year. I imagine she was at her mother's side during the roundup. She has a long, thick, gnarly scar on her hind end that speaks of some trauma--what, I'll never know. 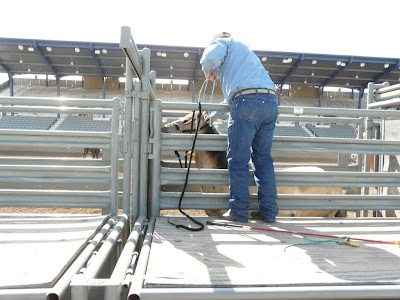 In the tent they'd asked me--halter or no halter? I hadn't even begun to contemplate such a thing, but the volunteer by my side assured me I'd WANT a halter. She even helped me pick one out at one of the booths before I left to get my trailer. Like I said, she was VERY helpful! And, I think she was right about the halter--although, Beautiful somehow got hers off after the third day home. 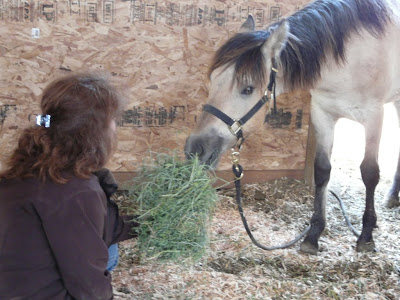 In the beginning, there was a lot of this--feeding out of my hand. We had to take it slow because the first time I picked up the lead rope she was dragging around, and she saw me at the other end, she propelled herself the opposite direction into the bars of the pen like they weren't even there. It was obvious, touch was a LONG way away, and would first be accomplished through the use of a bamboo pole. 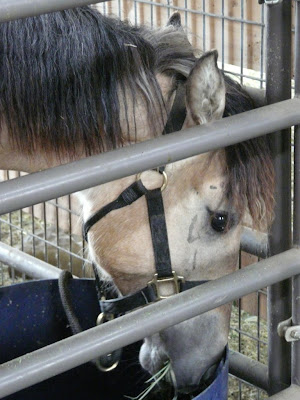 This was her eye--glossed over--as if she was somewhere deep inside. She was a fearful, timid horse who preferred to hide in the corner of her pen--hind end turned against me--as if pretending I wasn't there. The first lessons were all about getting her to acknowledge me--face up--and accept my presence. 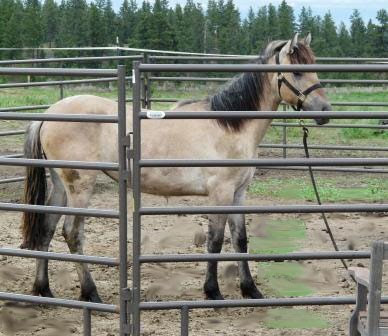 I found these pictures as I was looking for one to use on my Mustang Pumpkin, and all these memories just came flooding back.

Life with a Mustang has been different than anything I've ever experienced. In the beginning, they're vulnerable--but not because they've been abused, instead it's because they don't know what humans want from them. They're a wild animal--not like a colt born on a ranch who hasn't been handled much, but like a deer or an elk. They're proud--like only a horse who was born running with a wild herd over thousands of acres can be proud.

In the end, they're a horse, too--and have so much in common with the domestic horses in my herd. If you'd seen me out grooming Beautiful today, you wouldn't have guessed she was any different than the others. She's quiet, calm, respectful, and comfortable with human contact. But I know--and I think she knows--there's a difference.

Working with a Mustang probably does different things for different people. In my case, it brought me back into the world of emotions with my horses. If Beautiful could be vulnerable, I could be vulnerable and open my heart to a horse even though they'd taught me how fragile they can be and how easy they are to lose. If Beautiful could be courageous, I could step up and face my fears--many of which centered around working with a wild horse.

Beautiful Girl has taught and continues to teach me many things--I'm very thankful I got a little crazy that day, listened to that BLM volunteer, and adopted a Mustang.

After this post, I'll be on a little bit of a blogging hiatus as I pursue a few projects, spend time with my herd--dogs and cats included--and prepare for the holidays. I hope all of you have a wonderful fall with your horses!
Posted by Linda at 8:30 PM