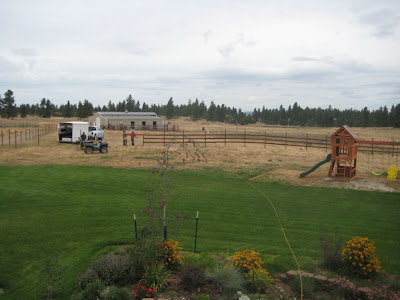 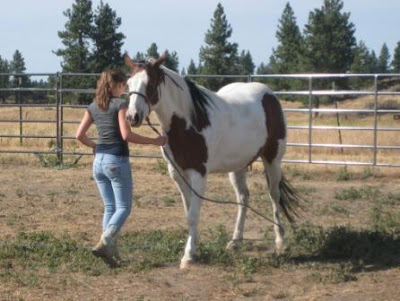 Here's Shiloh with Cia--she's our four year old filly we have raised from a two year old and started to ride lightly a couple summers ago. She's still very green, and we need to get serious about finishing her up and riding her consistently now and through the winter.

All of our horses have the most amazing, sweet personalities--they really don't give us any issues to speak of. I feel like all we have to do is spend time with them and it goes pretty smoothe--maybe this is the key with all horses? Just learning to communicate with each other?

Here's a photo from our ride this morning. Shiloh's on her filly, Cowgirl. She found her on Dreamhorse as a weanling and has raised and trained her. She's an AMAZING horse. She never gives Shiloh a bit of trouble--just point her and go--arenas or out on the trail--long breaks in between or no breaks--she does what she's supposed to. Everyone should have a horse like her. Do you think it's because Shiloh raised her from a baby? I do. Today she was a little sore on her back hip, but I think she pulled something during last night's wind and fire storms. It seemed to get better as we rode. (Update: she's better now.) 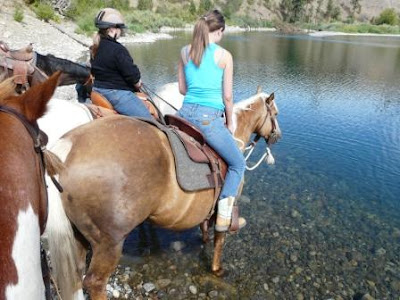 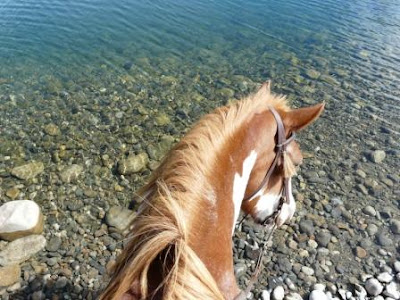 Riding Cia #2--we take over and Mike rides her for the first time.

Here's my hubby riding Cia. I'm trying to get as many people on her as possible so she can be our next grandkids horse when she's ready. 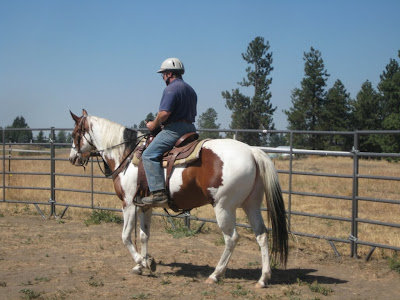 Here's Beautiful doing her trailer loading training with me about a month ago. She wasn't too sure about getting in there. She needs some more work to get comfortable with it. Where did the summer go? The kids are going back to school next week--my favorite season is around the corner. This is the best time to ride, too--especially when you don't have to take kids back and forth to sports practices!! But it's also sad--I'll lose a riding partner in Shiloh--at least for the weekday rides. (Update: I've been working on this post for a week, and now the kids ARE in school. Fall rides!! Yay!!) 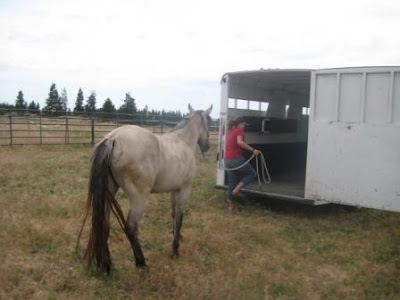 There are little to no flies in the barn.

The farrier was out yesterday for Cowboy and he noticed that the injured hoof is starting to contract on the inside. That shows he's compensating for pain and putting his weight in the center--but he told me not to worry. It's to be expected that there is some arthritis in there, but as long as he's sound...take it day by day.

Beautiful Steps on the Barn Kitten!

Poor Beautiful, lover of kitties, made the unfortunate mistake of stepping on one the other day. It was so odd. She's always a bit uptight leaving her stall and walking to turnout. Like most young ones, she has pent up energy. So, she stepped out without really looking and landed square on top of the kittens stomach. I heard a horrible scream and Beautiful jumped back about three feet. The kitten ran away, I thought, to die. I proceeded to put Beautiful out in the run and she just lost it--running from end to end of the turnout--spinning--running back toward the gate. I think she was bothered by stepping on the kitten because she gets really close to them. Later, when we realized the kitten would survive and was (crazily enough!!) fine, I took the kitten out to see Beautiful, but she jumped from my arms and ran back to the barn--so more harm than good was done, but I guess it's the thought that counts.

Hope you're all having a great summer with your horses.