Update on Red and the Riding Area

A quick update since my farrier is coming at 11:00 (which, in his time, means 10:30) and it's a busy day since we also have a barn cat being spade and it's finals week for the kids.

Red is doing GREAT. I went out a couple of days ago and found that he was swollen from hoof to fetlock. (Doesn't sound great, I know) But there was no heat in it and he wasn't lame. I assumed he was just stocked up from his confinement. Well, yesterday morning, I went out and right there at the front, left fetlock, was an open wound where he'd had a proud flesh injury before. (I don't know how he got it, he had it when we purchased him and the flies always bothered it in summer when he was stalled). It was oozing out fluid. I cleaned it up, applied an antibiotic and wrapped it. This morning I went out and removed the bandages and it was practically back to normal--still open, but no smell to it and quite clean. I'm guessing he banged it on something and opened it up.

As for the colic episode, that seems to be behind us. He's eating and drinking regularly now. I've added loose salt to his food,(Kate's suggestion, I believe) added a white salt block to the pasture as well as the selenium block. I checked the temp of the water by hand, and the heated waterers really do keep it warm. I don't see a problem with it being palatable. As for the rest of his diet--after reading some of your comments--I looked into a local supplement designed for horses in our area--it's called Northwest Horse Supplement. Red is already on Allegra Senior, so I'm not sure how the two of them would go together, or if they should, once I figure that out, I'll decide which direction to go. I do thank all of you again for your suggestions--there are more of them that I plan to research as well. The ones I've mentioned are just the easy, quick changes.

As for the arena--aka "riding area", as we were putting it up it started to look too small to me, but by the time it was finished and we'd rounded out the corners, it looked quite large. (I'm going to measure it again to see what it's final dimensions are, but I'd guess 140x100 or so) I do think I'll want to expand it eventually, but we'll see how it works out first. The ground was pretty level to begin with, but we evened it out some more and will start bringing in sand, hopefully, this weekend. 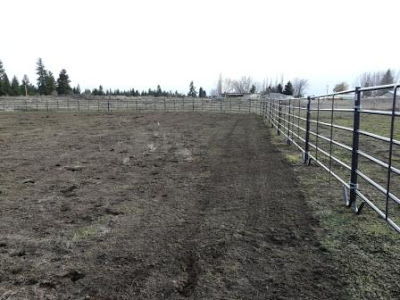 For now, we used t-posts to give it a backbone which seem to be pretty good. I certainly wouldn't put a bunch of horses in it together or train a new Mustang in it--but for a riding area with domesticated horses, it seems to be just fine.

I worked Beautiful in it for the first time yesterday and she loved it. She'd watched eagerly every second as we put it up and was dying to get over there and see what it was all about. After I worked with her leading I let her loose in it, but she didn't really want to run; she was more interested in grazing whatever grass was left there. I wasn't sure she was going to let me catch her when it was time to go, but she did. Lucky me. So, time to get ready for the farrier. You can set your clock to him coming at least fifteen to thirty minutes early every appointment--so I like to be ready for him.

Happy Trails today wherever you're riding.
Posted by Linda at 9:20 AM