I don't know if this was my problem or not, but I started thinking that since my salt block has trace minerals and selenium, when my horses feel like they have enough selenium they might stop licking it, thus limiting their salt intake. Does anyone have experience with this or thoughts?

I've been worried about Red's lack of water the last couple of days which, though he's not as sucked in now, he's still not back to normal. I put him out with the rest of the herd after breakfast. He'd eaten all of his wetted-down-flake of alfalfa and Allegra Senior, and was resting in the sun. I thought it might be good day to let him out with the others. I can pretty much tell if he's drinking enough water at this point by looking at his flank, and I'll lock him back up at dinner so that I can monitor everything else through the evening.

So, I went to Big R to get supplies today and picked up some plain salt blocks so they can have a choice of either. When I threw it in there for them, Red immediately came over and started licking it. Maybe I'm on to something here. Maybe I've unintentionally limited their salt intake!!

Kara, at Must Love Mustangs, did an experiment one time with mineral licks--she had one each of every mineral in a specially built container. The horses had access with the thought they'd take only what they needed. Hmmmm...could this be the same case with the selenium salt block?!?

I asked you all about the outdoor arena a few days ago and learned a lot from your answers. I learned that I want a permanent arena. The idea about keeping the footing in and the aesthetic issue really convinced me. However, it also made me think I'm not ready to build one yet. I don't know how I want it, and it's too big an investment to jump in unprepared.

In the meantime, since I need an enclosed space to ride C'Ya, I'm opting for a portable/temporary system, size 120x96. This will give me time to experiment and learn. Since it's portable, I can move it, rearrange it, and when I'm ready for a permanent one, use it in some other capacity around here (you ALWAYS have use for panels) or sell it. I need to figure out how big I eventually want it, where I want gates, what type of footing, what height I want the rails, how many rails, how high the bottom board should be, and many other things.

While we were buying supplies we went ahead and invested in the panels for a 120x96 riding area. (I won't actually call it an outdoor arena at this point) I went with a panel called Behlen since it matches the Powder River panels we already have. They seem to be pretty well made--6 rails, powder-coated, 64" high--and they were only $75.00/panel with the volume discount.

My husband just left to pick them up. I'll post a picture when we get it finished. Here's a picture of the panel for now. 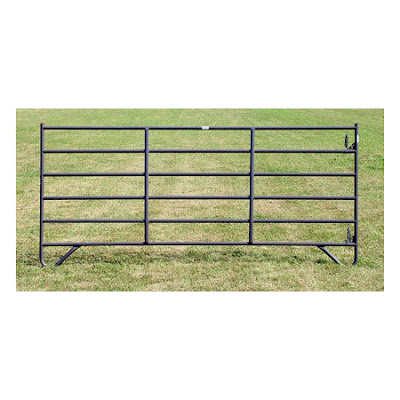