A Plastic Herd and Crazy for Crazy Heart 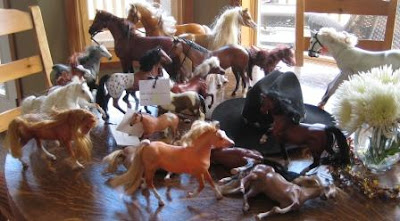 Can you find one of your horses in this herd? The ones with the tags remind me of the Mustangs at the sale with their numbers. 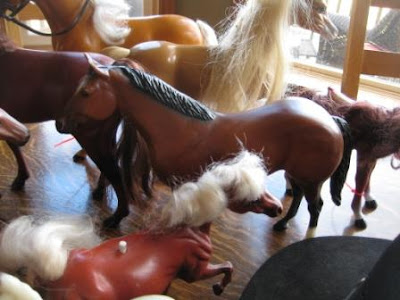 I picked up this whole herd of plastic horses at the annual 4-H Tack Sale at the Fairgrounds. Most people were there for saddles, bridles and blankets, but me, plastic horses. 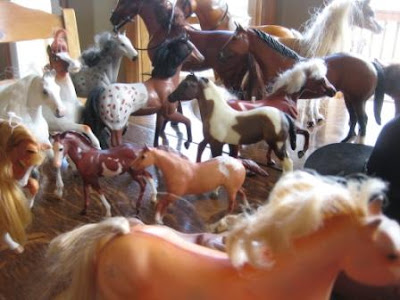 Our grandkids and nieces love the toy horses, so they'll be a great addition to our existing ones. I also picked up this great hat. It doesn't fit my big head, but it should be perfect for the kids after I clean it up a bit. 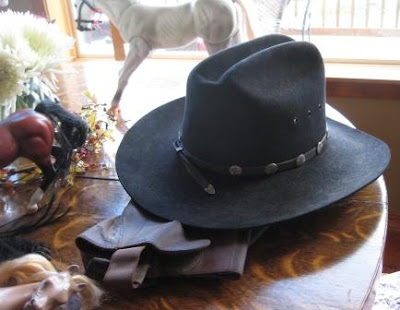 Has anyone else seen the movie Crazy Heart yet? My husband and I saw it last night and we both LOVED it. My husband thought it was the first good movie he'd seen in at least a year. Does Robert Duvall make a bad movie? 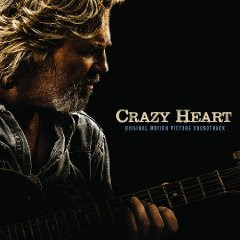 I went out and got the soundtrack today and have been listening to it all morning. You've probably all heard the premise of the movie--an old Country singer who's burned out and hasn't written any original songs in years. He's going from town to town playing his oldies but goodies to old-timers who still remember him. While on the road he falls in love with a woman who has a four-year-old son, the same age his own son was when he last saw him. That's all I'm going to say about it because the real story is in watching the performances--the complexity of the characters playing out together with the backdrop of good music. I think it was well-done--honest but compassionate, too. (BTW, after seeing Jeff Bridges in the bathroom scene I see why he won the Oscar--you've got to be a humble man to play that part!)