Updates From the Place Winter Skipped

Now I'm pretty confident, winter has skipped us. I think it was so unkind to us last year, it didn't have anything left this year. I don't miss it. For the next ten days, the temperatures are going to be in the 40's or 50's--which takes us almost in to March.

The farrier was out yesterday. Remember my little pony, Jasmine? She used to be scared of him, but has gradually gotten better. Yesterday she was the best yet. She didn't pull away once. 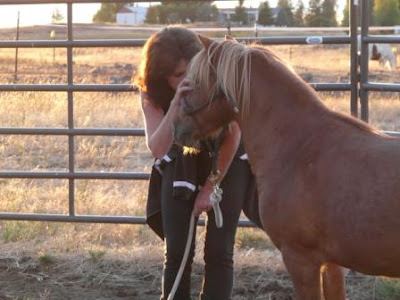 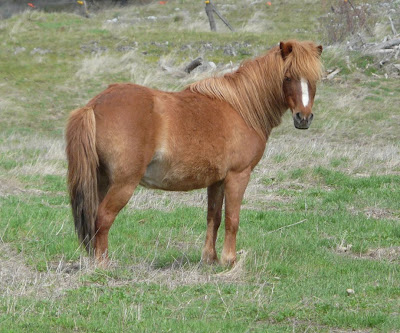 He was standing near Beautiful's stall when he trimmed Jasmine, and Beautiful was trying to kiss at him the whole time. He was like, Wow, you're awfully friendly now! He took time to pet on her after he was done. He probably likes coming to our house for trims again. All of our horses are pretty near perfect for him.

I have a little incident to post that isn't about my own horses, but I don't think Shiloh will mind too much. She has this wonderful mare that she's raised from a weanling--the palomino, Cowgirl. The two of them have this deep bond and Cowgirl KNOWS who her owner is. Generally, I leave her alone since I understand that.

The other day, we rode together--me on Cowboy, her on Cowgirl--and afterward, when we had them tied at the trailer (several feet apart) I came back and found Cowboy stretched to the end of his lead. Immediately I thought she had done something to him, even though she was standing there like nothing happened. I started to untie him, and all of a sudden his eyes went HUGE, I turned around and she was flipping her hind around at him again with me in the middle. I took care of her, untied him, and put him back up.

This is so surprising--not that she'd want to kick Cowboy, since none of them like him, but that she would do that with me there. She's the kind of horse that you can not ride for months, then jump on her and she does everything you ask. She's been like that even when she was young. Her intelligence is unsurpassed. Also, she's the alpha mare of the herd and always has been. She's the type that hardly ever gets scared--if she does, she stands there and doesn't back up. You give her a job, she wants to do it. The only thing she doesn't like is boredom--and Cowboy.

But that wasn't good the other day, and I'm not really sure how to train her out of it (I won't be doing any of the training--it's Shiloh's horse). I mean, it's almost always that combination we take out on the trails, so they have to be together a lot. I don't want to have to worry about my horse getting his legs broken! And why now, when they've been together like this for years? Shiloh did mention hobbling her with Cowboy tied near. Any ideas?

The other issue, of course, is that it showed a lack of respect for ME. So, I have to deal with it on that level, too.

Remember the book give-away I was doing? It's been a long time, I know--but I did the drawing this morning and have two winners. First, Kritter Keeper from Farm Tails and second, Pony Girl, from Pony Girl Rides Again. Congratulations.

I've entered everyone who commented once for every comment since the giveaway began, I'm not sure everyone actually wanted to win the book though! Let me know, and please email me your addresses so I can get the books off to you! There are some GREAT stories by women!!

Happy Trails, everyone!
Posted by Linda at 8:46 AM