Raising A Barn & Upcoming Projects Around the Mini-Ranch 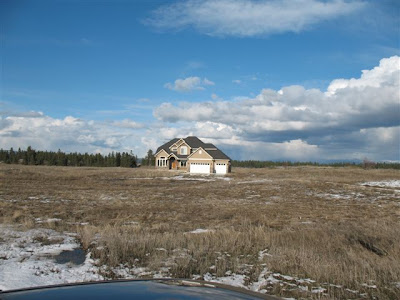 It was fourteen, unfenced, raw acres with an unfinished basement. So, we had to set to work immediately if we were going to have bedrooms for the whole family, and the horses all have a home.

After putting up temporary fencing and a round pen, we turned our attention, first, to the inside of the house, the basement. It started out as a large concrete room. We thought about how we'd like to see it, marked out imaginary walls with masking tape, and went to work, doing it all ourselves. Everything from plumbing and electric, dry wall, you name it, we did it. The carpet was the only item we subcontracted. 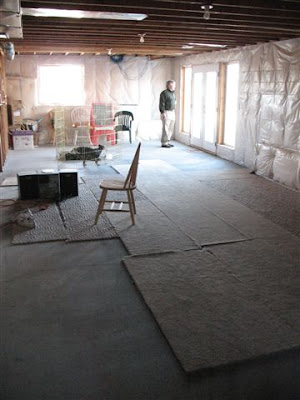 And later, a finished room in the basement. 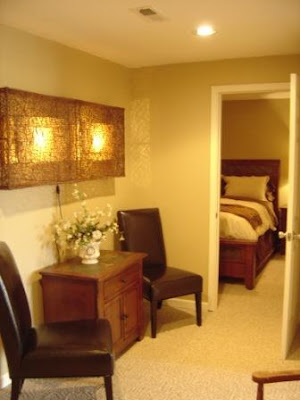 After the inside was under control, which took from April to October, we started the barn project, hoping to finish it before the snow flew. First, we had to dig a trench, 3' deep, partially through rock, all the way out to the barn. It was very long, spanning 500' to the first frost-free. In this trench, we ran water pipe and electric wire. One of our sons, an engineer, told us to run a string through PVC, just in case we ever needed to run another wire out there after we filled in the trench. For some reason, we didn't do that, and I regret it now, and recommend to anyone else out there reading this and planning a barn project, to do so. In retrospect, we could have used it to wire out video feeds so that we could monitor the horses from inside the house or from a remote web server when we're out of town. 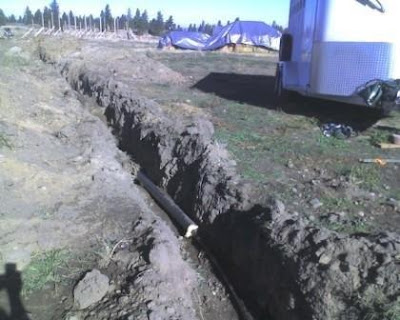 It was fun to watch the barn go up, especially since we weren't doing it. We had one month to get it up before the big snow came, and since it takes us about five times as long to do anything (learning curve) we didn't feel like it was a job to tinker around with. 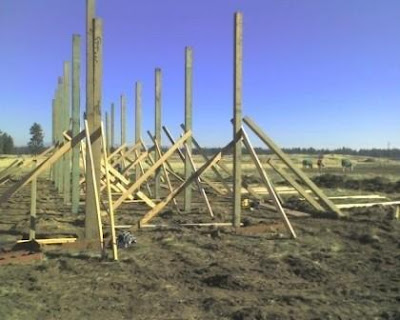 I never did blog about the barn raising because it was a good year and half before I adopted Beautiful. 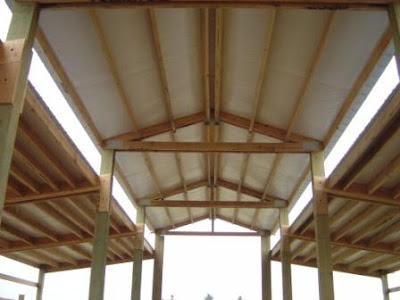 It was a tough decision about the barn. We only had a set amount of money and I wanted to make it stretch as far as I could with an eye to doing more in the future. With that in mind, I opted for a 60' barn rather than smaller. If I'd gone smaller, I could have got the 12' overhangs I wanted, and I really wanted them to keep the rain and snow out of the stalls, but we came to the conclusion that we could always add those on later. It would be more difficult to add on 24'. 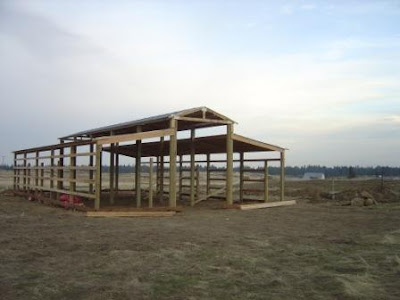 It really stinks when you only have a set amount of money. I was really hoping money would fall from the sky so I could do everything I wanted right then and there. You know, the clouds open up and a big pot of gold (or, I'd take dollar bills--better yet, 100's) appear in our backyard. Instead of that happening, what money we did have seemed to be falling into some bottomless pit. Did you ever see the movie, The Money Pit, with Tom Hanks? It was kind of like that.

So, it's no surprise we also opted out of them finishing the tack room and stalls, electing instead to do them ourselves. 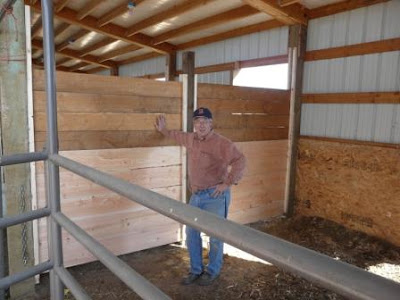 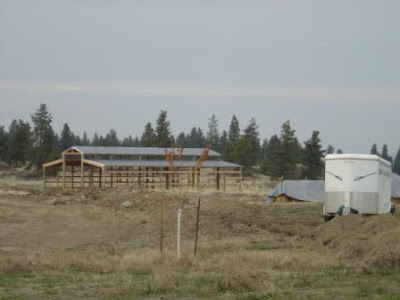 We added a couple of frost-frees on either side of the barn. 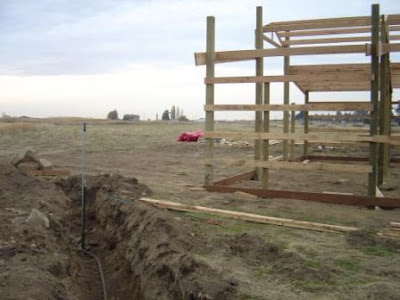 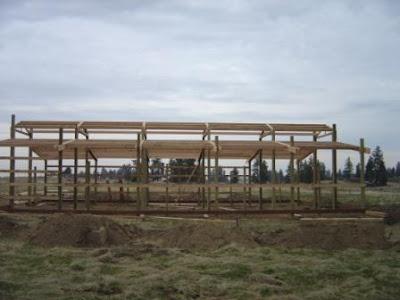 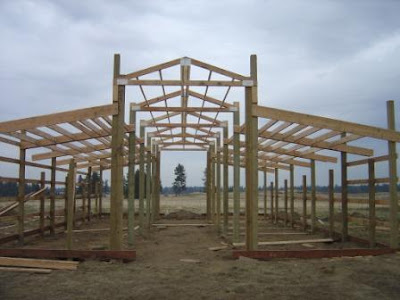 You can kind of see how rough we had it before the barn went up--lots of tarps, and panels. We called it shanty-town. 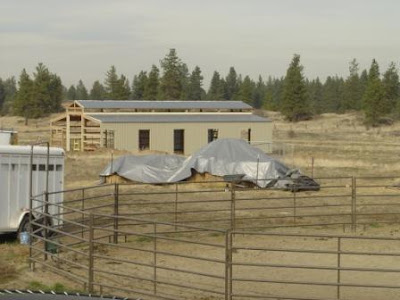 It took us until the next summer to get the automatic, heated-waterers installed. Instead, that winter, we hauled water in 55 gallons drums, filled the tanks and kept the water from freezing with stock heaters. There were a series of extension chords hooked together and extending as far as we could get them to the pastures from the house. That winter, the snow got so deep we couldn't see the extension chords anymore, and eventually, as the snow melted, we could only see them through the ice. By some miracle, they continued to work. Here's the barn that winter. 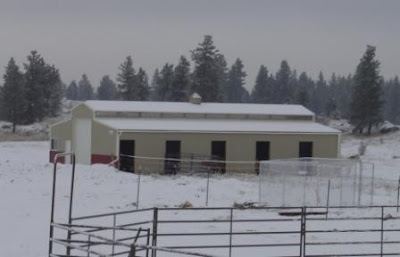 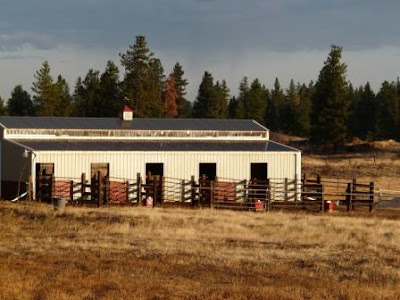 The summer of the automatic waterers, we also had time to put in the front fence. We had to build concrete braces to support it over what was mostly rock.(A tripod shape) It took us a good, long time to complete it. So, you can imagine how discouraged we were, when after the first good wind, it blew over. We went back to the drawing board, reinforced it, and it hasn't blown over since! 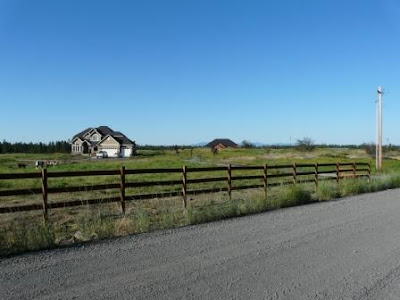 The fence has two strands of electric on the inside. The horses were in the pasture when it blew over, but it scared them so much, they didn't dare go near. We got the lead horse into a halter, and then the rest followed back to the barn.

Last summer we turned our sights to landscaping. We wanted some green grass in front of the house rather than weeds. And, I was dying to plant flowers and shrubs. It occupied us from March to October. 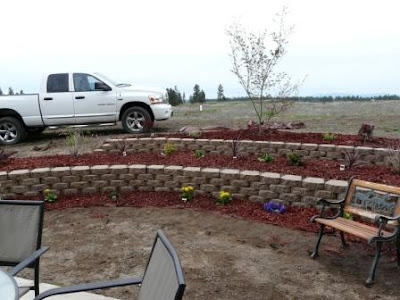 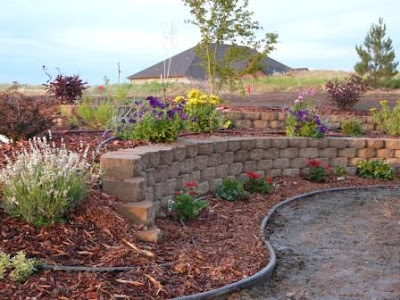 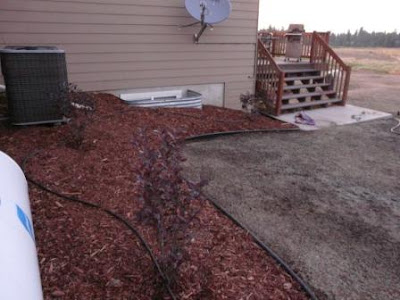 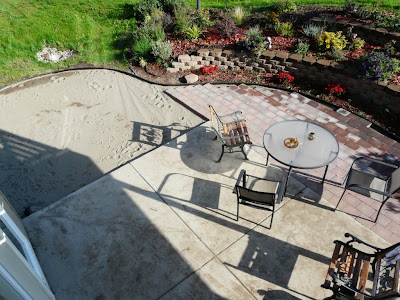 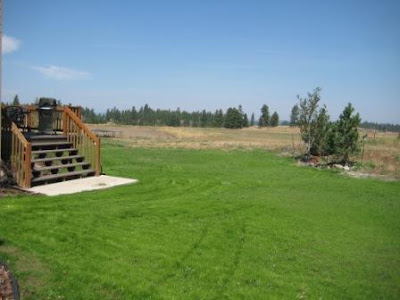 I couldn't find our last "after" pictures of the outside, they may still be on one of the cameras, but these give you an idea of how it was progressing.

This year we have big plans, and they should all be fun. We want to continue fencing in the property with wood, especially the corral off the barn, and put in a permanent outdoor arena, hopefully with some lighting.

It has been a lot of work, all these projects, and I can't say that I think it's really worth it--I'd much rather have purchased an already existing horse property, but, at the time, we couldn't find any in our price range. Because we started from scratch, there is a deeper attachment and understanding to every inch of our home and property because of the work we put in. Every flower, every blade of grass, every board and t-post, has some part of us in it, too. (I'd rather the t-posts not have any part of us or us them, but hey, they're cheap and get the job done.)

As we all look toward Spring--what projects do you have planned for your places this year? What did you accomplish so far?
Posted by Linda at 8:38 AM