Is this Spring? I think So.

I had the best ride at the arena yesterday--no lesson, just fun. I needed that. I met my friend with the goal of just getting the horses out for exercise now that Cowboy seems solid on his feet again. He did seem off toward the end of the ride, but on the opposite side as usual. Maybe I'm imagining it because I know he has the potential to go lame where the fracture occurred, but other people think they can see it, too--think they can see it is the key word. No one sees anything until after I ask. Am I imagining it?

The riding season is back in full gear. We've pretty much decided there is not going to be anymore winter--despite what the groundhog said the other day. The temps are warm, or at least, seem warm--are the 40's warm? Apparently, to us Spokane people it is. We're going to ride this afternoon at the arena again--and hit the trails for the first time Monday--when it's supposed to be sunny and maybe up to 50. There's a great trail--an old road--that doesn't get too muddy and overlooks all of Spokane and surrounding area--it's like you're riding in heaven looking down on earth.

Here are some pictures from this morning and yesterday.

Maggie in the fog yesterday. 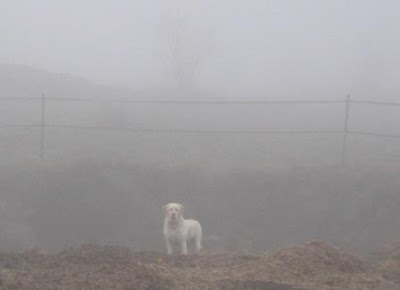 A house going up at the edge of our property. They put the trusses and walls up yesterday. Instant house! 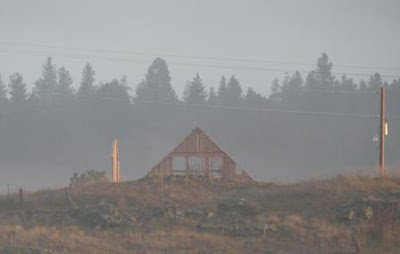 The horses huddling this morning. Notice they don't let Cowboy in? They never do. Grrrr! 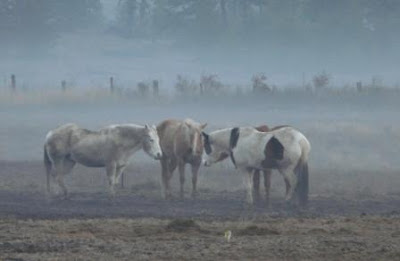 Here's the fog lifting this morning--looks like it will be a nice day to ride. 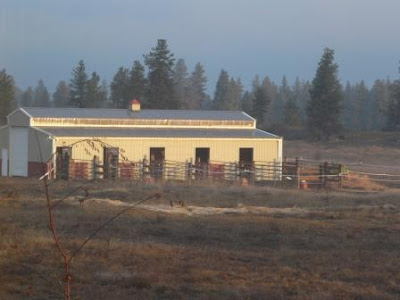 And, jumping back to yesterday--Ezzy sitting at the edge of the fog looking down the road toward the house--which is completely obscured. 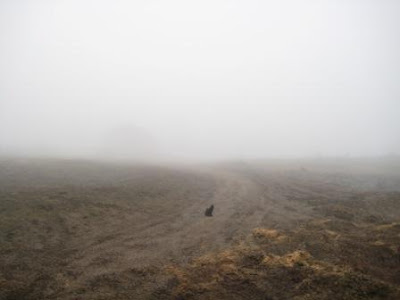 Here's Beautiful, yesterday, tied in the alleyway of the barn. She's acting like it's Spring. She's pretty wound up, pawing, chewing her rope, swinging her butt around. By the time I was finished grooming her, I was too tired to take an after picture. So, more work with her today is definitely in need of and called for.

The picture doesn't really do her justice, but she has grown a lot this past season. All horses officially turn another year at January, but she is still 2. I look back at the pictures of my other horses at 2 and they're scrawny--so I know horses, especially Mustangs, have a lot of growing and maturing to do still. 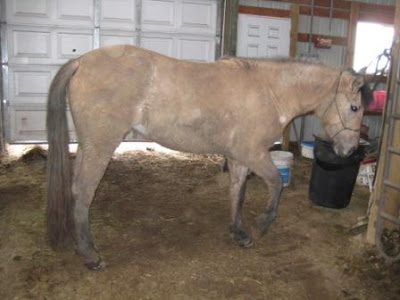 Oh, another thing--my computer died yesterday. Died. Dead. Bad. Of course, I hadn't backed anything up in over a year!! After I banged my head on a few walls and dry cried (where you want to cry, but no tears will actually come out) I went to work to solve the problem.

Well, lucky me, pat me on the back, I fixed it by myself. Despite what people say when they're mad, computers are logical instruments. By process of deduction, I narrowed it down to faulty RAM, and replaced it with my old RAM which I had sitting around. Voila! Computer problem identified and solved--computer working again--I instantly back up ALL of my data!! I got lucky that time.

Caution to everyone else: (though you probably don't need this caution) back everything up.
Posted by Linda at 7:47 AM