A Lost Barn Cat & Another Lesson 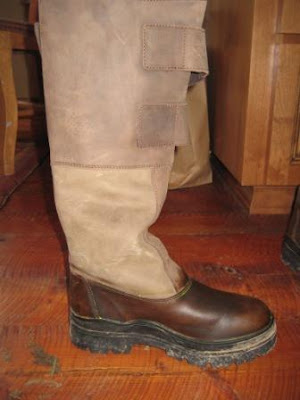 Tuffa Boots got back to me today--a quick reply, I might add--and suggested that I apply a waxy product for water repellant to my new boots--something like....Saddle Soap! Music to my ears. (I love anything to which I can apply Saddle Soap since I have plenty at my disposal.) They said it would help bring the color of the leather out, too. Above are the boots in progress--below are the boots right after I finished. 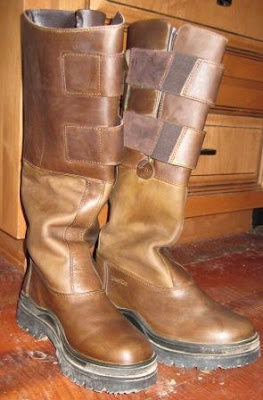 As they've dried, they've lightened up a bit. I'll take a picture in the coming days with me wearing them--maybe even out in the mudnure.

An interesting thing happened today on my way to the barn (and at the barn). I let the cats out of their house when I did the morning feeding and all was well. Then, when I went out to get Cowboy, two hours later, for an early morning ride before our lesson, #42 was gone!! I searched far and wide calling her. I went back to the house and looked there and all over the property. I called her name constantly as I groomed and tacked up Cowboy. Nothing. I know my cat, and #42 would never not come to her name being called. She's like an obedient dog.

I figured she was dead--taken by the coyotes. It didn't make sense to me since it was broad daylight, but why else wouldn't she have come?

It was getting close to lesson time and I wanted to be there early, so I took off for the arena a couple houses over. As I rode onto their property and past their large hay barn, guess who I saw hiding against the side of it in the tall grass?

It was the furthest I'd ever seen her from our home, and I can only figure she followed our dog over and then was scared to make it back across the wide-open fields.

I had to lead her back to the house by horseback--I was calling her name and she was bounding behind Cowboy and I like a cowdog.

As for the lesson, it was fun. I'm a learning a new lingo, like posting on the diagonal . I didn't know what she was talking about having been trained to "post" period with the beat of the horse depending on the direction we were moving in a circle. It was something I felt rather than something I saw. So, once I figured out what she was talking about, we were on the same page.

The other thing is full seat--half seat. Full seat is apparently where you're sitting in your saddle. Half seat is where you're pushed off the saddle--as in the picture below--also called 2-point.

I had decided to use my old saddle because when I was riding Cowboy around the pasture I realized that if I scoot up in the seat (it's a large seat) I could get my feet under me like she was wanting. So, when I showed up for the lesson she was pretty impressed that I'd worked all that out.

The difficult part of it all is that she has me do a lot of 2-point riding (without posting) in order to get my balance. She had me ride up in the walk, trot and lope. The lope was very, very difficult. I was supposed to be able to keep him at the lope while balancing myself in the awkard position above my saddle. I accomplished this without killing myself, but Cowboy sure seemed like he wanted to help me out. He wasn't used to it. He's a good horse and he REALLY doesn't want me to fall off--I am, afterall, his meal ticket--(and friend, he he)--and I'm sure I was sending him some mixed signals!

The other thing she had me do a lot was ride with my feet out of the stirrups in the walk and trot--she wants a relaxed leg. Apparently, I'm tightening up and it's causing me to bounce around a bit.

All and all, it was a very productive lesson, and gives me a lot to work on for the next couple of weeks. We tried to take pictures, but discovered I'd left my memory card at home.

Here is a picture of the tree we planted in the dark. By daylight we realized it was leaning to the East. Hmmmm.... 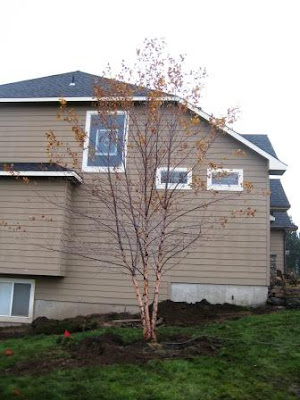 Hey, you can see the stained glass in the window above the tree in this picture!
Posted by Linda at 5:08 PM