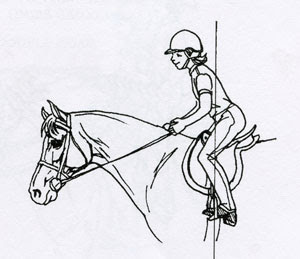 This is a picture of the proper English seat, and I think it could be said, that it is also the proper Western one. Unfortunately, it is not the seat I naturally assume when I sit in my saddle.

I tend to sit back a bit and have my legs forward a bit with the heels down. This position, according to my new instructor, locks my hips in place and puts my center of balance behind my horse--thus the problems when Cowboy takes an unexpected jump--thrusting me backward.

The proper way makes me feel like my feet are behind me, but she (and my last instructor) assure me they are straight down. She has offered to take a picture to prove it to me, and next time I'm going to take my camera and take her up on that offer!

So, I have to open my hips, move my feet out, move them back, and then relax them in place. Then, when I post, it's like standing up from the ground--the stirrups, she says, should act as the ground for you. If you have proper balance, you should be able to stand in the stirrups and walk your horse. And, when she says stand, she doesn't mean STAND, she means pick up your butt from the seat just a tad and lean forward a bit. Apparently, she shouldn't see too much sky between you and the saddle.

Once I got that part down, we worked on my hands. We switched Cowboy to a snaffle bit and worked on constant contact--very light contact, but contact. She had me walk circles around her. Walking a circle to the right, I was to keep pressure on the left rein, but pull the right rein in. This caused Cowboy to think I was turning him, when actually I was just asking him to bend. I had to use my right leg to push him out of the circle. Eventually he understood me.

We also practiced turns--in order for him to keep from dropping his shoulder, I had to put pressure on the inside rein and maintain some light pressure on the outside rein as well. Keep my eyes UP (easier said than done) and look where I'm going.

We practiced yielding the front and hind quarters while planting on the opposite--I think this would be "spinning" in Western. Cowboy has always been confused when I've asked for this. She helped me communicate to him a little better and reward him for the slightest success. First we moved the front--then, when we did that both ways, we worked on the hind.

He really wanted to do what I was asking, but it was hard for him to figure it out. Sometimes I was pulling back on the reins to keep him from going forward and he took it as a cue to back up, then I'd kick him forward, and on and on until he found out where to move.

She really wants him to MOVE his body and not be restricted. She wants me off his back as much as possible. For example, when I'm asking him to trot, if I don't post high, he doesn't stretch out as far. His back foot should be hitting where his front foot left off, but he's falling short. So, we worked on getting the post right.

It's hard! I have to relax my shoulders, relax my head, relax my ankles, move with his movement to post me forward, keep my head UP, keep slight contact on his mouth, use my legs to push him out of the circle. Sooooooo many things to think about.

Cowboy was GREAT! He's probably wondering what we're up to now--but he's game.

The arena is looking good. They've worked hard to get the footing right, and they've done a good job. How lucky am I to have that next door? There is a $7.00 haul-in fee--or for me, walk-in fee.

Cowboy didn't seem to care about the change in bit to the snaffle, but when I turned him for home, he acted like I didn't have a bridle on him at all. He started to jig. So, I got off and switched back to his curb and without having to use it at all, he walked back like a perfect gentlemen. What is THAT all about??? Psychological, I guess.

Oh, here's a good idea from my instructor--she gave him an apple at the arena after the lesson. She said she wants him to associate the arena with good things rather than the barn at home where I give him his dinner. What a great idea!! Cowboy was a very sloppy apple eater, and slow to boot, but he'll remember that.

I have a headache, I'm sore, but I'm excited to go over there again this week and practice all of the above. It is going to take lots and lots of practice if I'm going to get it right. It's meticulous. She said she hears people say their horses don't like arenas a lot, but she thinks it's also the rider that doesn't like arenas because when we work and take lessons there, it requires so much attention to detail.

I wish I could have taken some pictures, but I was too busy thinking. Maybe next time she can take some for me.
Posted by Linda at 1:33 PM