Winning the Heart of a Horse (Continued)

Just got back from our ride and my first thought is....thank goodness for spandex riding pants! With all the company we've had lately, I seem to have gained a few pounds. Nothing worse than trying to squeeze extra pounds into tight jeans when you're riding a horse.

No need--I have spandex! (Well, actually, they're mostly cotton and only 8 percent Spandex.) They're boot cut, faux jeans with knee patches--by Kerrits. Love 'em. I bought them last year on sale at the Foxy Horse and Hound, but they don't seem to make them anymore. The closest thing is this: 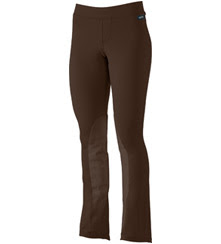 Back to my pony project. I wanted to follow-up with some specifics about what I've done so that you can offer me up some of your advice--if you're willing.

1.) I go out with halter to get Jasmine from her stall and pen--her run is about 24x24 and her stall is 12x12. I keep the halter in full sight. Jasmine pops her head up and moves her feet. She circles her run and then enters her stall. Most always, she stops at that point and allows me to halter her--on HIGH alert. Once haltered, she relaxes a bit.

2.) I walk her out and groom her. She flinches a lot, but will allow me to do this. She doesn't like any touching of the ears or anywhere around the ears. So, I put my hand on her forehead and leave it there--rub her forehead a bit--touch the ears with my fingertips. Then I do the same thing starting at the base of her mane and moving up--lots of hand sitting still until she relaxes. I might get some chewing--but more often I see the eye relax and take that as a cue to go further.

3.) Then, I lead her around and sometimes let her graze.

4.) Since I can catch her in her pen--I want to work on catching her in larger areas--in preparation for releasing her in the pasture again. So, I take her to the roundpen and release her there. And, here's where it gets hairy. To roundpen or not to roundpen? I have been choosing not to roundpen aggressively. Instead, I've been walking up to her with the halter, and if she takes off I work her quietly and let her rest when she stops moving--then approach with the halter. She always takes off. (She's a pony, she's learned that her strength is in evading capture!!)

5.) At this juncture, if I aggressively roundpen her, I will eventually--maybe after an hour--get her to stop and take the halter. But this year I've done it differently because that didn't seem to be doing me any long term good. This season, I've been walking away and coming back in an hour to do it again--then again--until without aggressively moving her around, she will stand and let me halter her.

She's really smart, and she wants back in the barn with the others, so she will eventually think it through and make the right decision. Sometimes it takes until the next day, though, and she has to spend the night in the roundpen--I take her food and water there.

So my big areas are being able to touch her ears and have her relax with my hand around her head--and to be able to catch her in large areas.

When your hands are around her head her eyes pretty much bug out--and you can see the whites. Which is why I started to wonder if she had eye problems, but that doesn't seem to be the case. She's so sensitive that I made the decision to keep my hand quiet on her and start from there this year.

I'm getting ready to go out with her right now--so I'll update this post in about an hour. Any thoughts about this? Maybe I'm making the wrong decision not to roundpen her. I guess it could be argued that if I ask her to stand for the halter, I better stick it out until it's done, or else I'm possibily rewarding her evasion. Hmmmm...

Went out with Jasmine and got a brainstorm! I took her to the roundpen, but tied her to the long line and let her go. Essentially, she was free to move--and she did--but it allowed me to catch her when enough was enough, so that I don't spend the whole day doing that. Instead, I was able to put another rope and halter all around and over her head (she was very scared).

I also worked on calling her to me and signalling with my hand, then gently guiding her. For the most part, she did it by herself. I want her to form a new habit--coming to humans, rather than running from them. This method is in the Parelli "games".

All in all, it worked pretty good. I know a teenager worked with her when she was at Tina's--and I know she had made progress around her head by tying ribbons to the halter to desensitize. What I'm doing is similar--but I'm using a rope and halter--the items I use every day. I also threw the rope over her back--which made her nervous. So, around the back, over her head, all over her body--so that she knows it's not a terrible snake or whatever it is she thinks it is.

I had wondered if all this evasion was pure fear or just knowing she wasn't caught anymore, but she knew she was essentially caught today on the long line, and she still ran--so I think it's 80 percent fear and 20 percent bad habit.