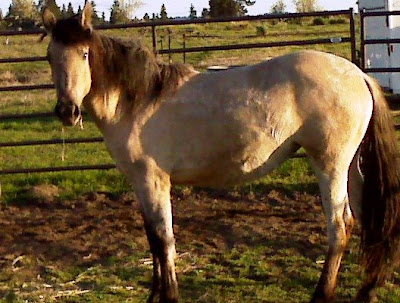 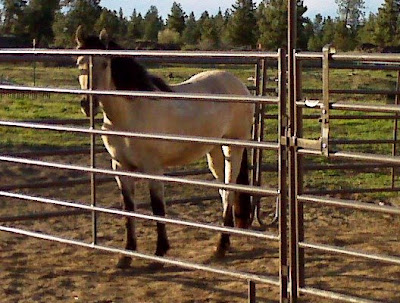 It's been so long since I posted a picture of Beautiful, you were probably starting to wonder if I still had her! I do, and here's Beautiful's update. (Sorry for the picture quality, they were taken spur of the moment from my Blackberry).

Tonight I went out to fly spray and groom her because the mosquitoes really picked up from, seemingly, out of no where. (A sign that maybe the weather's warming up.) She stood for the spray better than my five domestics did! She's a brave soul--very proud.

We have a ritual now, which is that each day when I come out to her, I bring her fresh picked alfalfa from around the property. I started it last year and then started it up again this Spring. Tonight, I was so set on getting her sprayed, I forgot to bring my alfalfa bouquet--however, she didn't act like a brat--as she might have since "treating" her could be akin to "spoiling" her. Instead, she gave me some sweet, subtle--maybe even subliminal signs--and I figured it out and brought her over some.

She has almost completely shed off now--just a little white--as you can see in the picture--to come off yet. Her color is "buttermilk"--perfect buttermilk. I look at her and say to myself, "Oh, that's what they mean by 'buttermilk buckskin!" (Dun.)

On the way to the roundpen she did a little bit of a rear because she was so excited at the good weather we had this evening. I turned around and said, "NO!", and she came down and stayed down--like she just had to be reminded.

She's really good at standing still after I unhalter her. I hold her there for a minute or two and pet her, so she gets in the habit of waiting until I push her off from me to leave. It's something I do with all my horses to keep myself from getting kicked.

As you can see in the picture, she's butt high again. I think I wrote earlier about how it was hard to get the weight on her lately--but now she's filling out again. I feed her double what I feed the rest since she appears to be in the middle of another growth spurt. (For those who aren't around horses a lot and wonder what we mean when we say "butt-high"--Horses grow in a see-saw motion--hind--then front--hind--then front catches up and so on until they get their full height. Many people say Mustangs grow later than domestics. Horses, in general, can grow until they're five--and if their nutrition was poor in early life, they may catch up in their later adolescence.)

She's not huge, by any means, but she is taller than the pictures make her look. When she lifts her head up, she's taller than me, but we stand pretty well head to head. I had a friend who showed me a trick about how to measure with a piece of twine and figure out what their eventual height would be--but I can't remember how it went. Does anyone else know?

Maybe when she finally gets her height, she can start working on her breadth! She's going to need some if she's going to pack me around the hills!!

Enjoy the sunshine tomorrow, everyone!
Posted by Linda at 9:08 PM