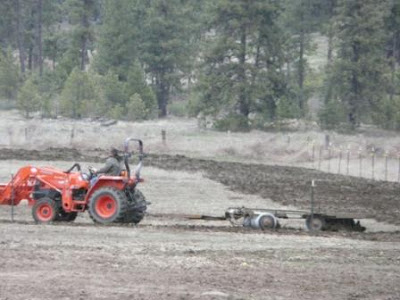 Well, Cowboy is back to normal--acting up and eating ferociously. So, back to the normal blog--about making hay.

This Easter weekend we spent our time discing ours and our neighbor's land--a group effort between all of us to replant our fields which had gone to weed--Yellow Tumble Mustard, to be exact.

Originally, our property and all of our neighbor's properties, were part of one large Dairy Farm. All of our fields were planted in alfalfa and irrigated.

However, the owner was getting old and he gambled a lot. A new casino opened up about a mile away where he began to spend a lot of time, eventually going in hock about 16 million dollars and having to parcel off everything he owned.

The original owners of our home, purchased the acreage during that time--and paid extra for "water rights". Water rights in Spokane County are a mixed bag. I believe water rights are determined on a first come basis--the date they were originally acquired. Also, you have five years after the last year of irrigation to maintain them by keeping up on the irrigation. It could also be that you have to water from a farm well rather than the house well--but that has been debated.

Needless to say, throughout these last five years or so, the land has not been maintained, and so has gone to weed. We're the only ones in this general area who have horses, but our neighbors are interested in growing hay as part of a "weed control" program. They're willing to plant their fields and let us harvest the hay. Yay!

This is the first time we've actually planted hay--so this is quite a learning experience. We're planting a drought tolerant (if there is such a thing) blend with Fescue, Orchard Grass and Alfalfa, and I'm not sure what else--because our neighbor is the one who chose the seed and then picked it up today from some farmers in Rearden. $2.00/pound--500 pounds for 20 acres.

Right now we're in waiting mode as we try to locate a seeding implement that basically pushes it into the ground and then comes behind and rolls it. The men were originally going to broadcast it, but are skeptical that would work with all the wind.

Does anyone know anything about baling options? For example, what is the going rate to have someone come in and cut and bale it when it's ready to be harvested?

Here are some pictures of the weekend. 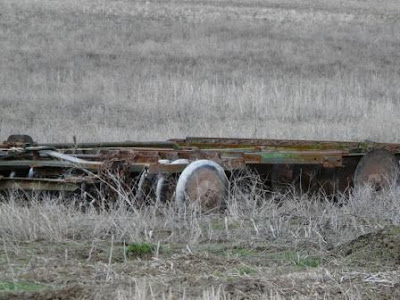 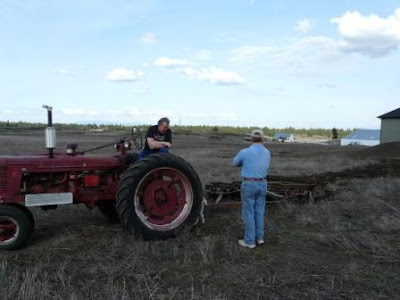 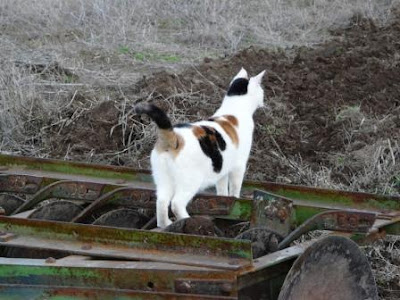 The fields after discing.