2009--Lern'ed Myself To be Smarter Than My Horse 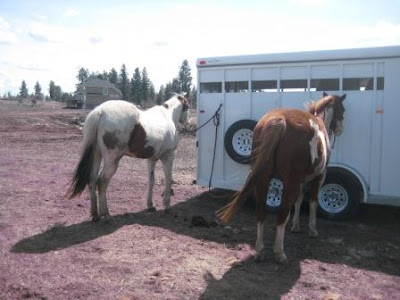 Yes, Cowboy has always been a pain when it comes to worming, and with his long neck, he can easily evade me. He puts his head about ten feet in the air and moves it back and forth away from me.

I've had a number of stupid tricks to try to get the wormer in--but usually end up wearing it. He's a tough customer!

Well, today--maybe from working with my smart little Mustang for a year--I decided to try to outsmart my horse. I put the wormer tube up there in his mouth---wayyyyyyyy high up in the air--and moved it over his tongue--and removed it and petted his forehead. I didn't squirt it, but he licked his lips like--ooooh yuck! Then, a light went on in his head--she didn't squirt the icky stuff. Hmmmm...he starts to wonder.

I reach up again--his head goes up high--I put it in his mouth--leave it there--remove it. He starts to work his tongue again and again thinks--hmmmm...no icky stuff. We do it multiple times like that until finally he doesn't lift his head anymore. I reward him. We do it again and again. All good. Then I squirt the entire icky wormer into the back of his mouth, and he doesn't even care. Can you believe it??

It worked so good, I tried it with Cia next--and voila--an angel. And what's best, the entire contents of the worming tube is in their tummy rather than my hair.

So, besides worming, I rode Cowboy and enjoyed the sunshine (which was supposed to be rain--ha ha), saddled my green filly Cia for the first time this year and lunged her (she did great), lunged Beautiful again and then groomed her while she was sweaty--trying to get some of the mud off.

This is a blog--and blogs need pictures--so here are some action shots. The first one is right after I tucked the rope under my arm pit and tried to snap a shot--I wasn't paying attention and I captured her flipping a u'ey. 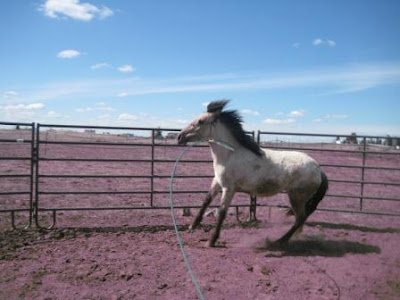 Next is her being a good girl. (Looking back at the pictures, which I don't recommend taking while you're lunging them, btw, I notice the halter is not tight enough and almost in her eye! Sheesh!) 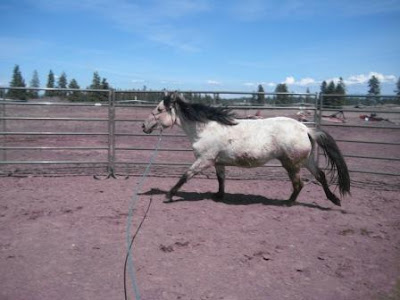 And last is her going by the side with the other horses--which is always where she acts up. 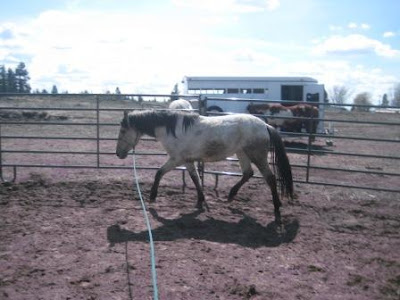 Then, the DISH technician came and got somewhat attacked by my dogs--and I had to run back to the house to save him. (They don't bite--really--just bark!)

All and all a great day--one for the record books--the day I got smarter than my horse--but only a little bit!
Posted by Linda at 2:00 PM