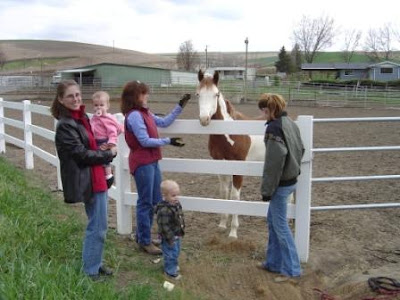 (Me, Shiloh, Beth and grandkids with Sonny, my colt who coliced.)

I have a good friend from Lewiston who I met through horses--she's a trainer, and I always remember her warning me whenever I'd say something like--Wow, nothing's gone wrong with the horses for a long time! They're all healthy!

She'd ALWAYS shake her head and say, Don't say that.

She'd grown up on a ranch and started training horses for other people when she was 12. She still trains 6 days a week all through the year--rain, shine, snow, whatever. She's out there putting in her time. And, all of that time spent with horses has taught her that your luck can change at any moment--so she's a bit superstitious about tempting fate.

Sure enough, my luck did change in February of '07 when Cowboy broke his coffin bone. That injury ushered in 7 months of what seemed like hell in many aspects of my life. His injury was misdiagnosed and wouldn't get better, we moved to Spokane to a property that had nothing on it except a half built house. (We moved 5 horses, three goats, 3cats, 2 dogs and all that a family with that many animals accumulates through the years.)

We had to finish a basement, put up fence over 14 acres, build a barn, bring water and electricity out to it, plant trees, pave a driveway and on and on and on. And we did almost all of it by ourselves except building the barn structure--we cried Uncle on that one because we only had a month before the snow would fly.

During that time my oldest son was going through a tough time which he got to the other side of safely, but who during those months, left me wondering if I'd even have a son.

And then, to top it all off, that August, the colt I'd raised and trained from a weanling coliced and died. Here's a picture of him running in the pasture just a couple weeks before his colic--he's the Overo Paint. 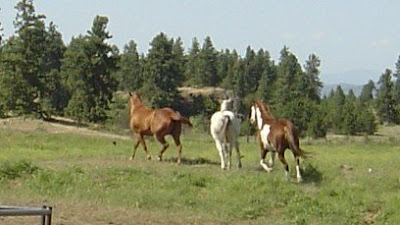 I felt like Job wondering what he'd done wrong to deserve all his misfortune.

I found I had to let things go--I let Sonny go, I even let Cowboy go--I figured he may never be sound again--and I let my son go because he was a man and I had to respect his choices--no matter where those choices took him.

And then things changed--Cowboy got better, we finished all the major projects around the house, my kids and I made new friends in Spokane, I found a new horse, Cia (below) who seemingly fell from the sky and into my herd, I found Beautiful the next Spring, and my son started making different choices that have brought him 180 degrees the other direction. 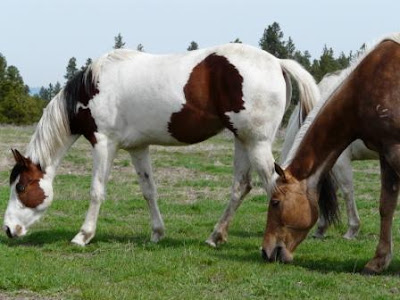 I'm going to stop short of tempting fate by saying everything is going great--but so far so good. I have been blessed in many ways no matter which way things turn tomorrow.

I haven't forgotten about the equestrian artists I want to showcase from Whoa Horse Art Team. I appreciate what they're doing so much--unique horse art is so hard to find. I really want to support and encourage these horse loving ladies on their creative paths. They've added new artists just today--one painting in particular really caught me--"Wyoming Summer" by Lucy Calhoun, below.

I envy them their talent. As much as I love horses, I never have been able to draw or paint one. So, I'm just in awe of these artists. 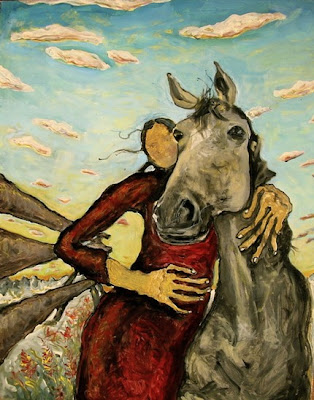 And don't forget the coffee tomorrow at Chaps--for all Cowgirls.
Posted by Linda at 11:01 AM