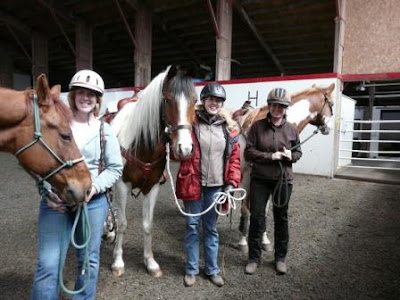 Last year my friends and I took what we call "Western Dressage" lessons, and loved them. It was a great way to get some riding in during the winter, rehab Cowboy, and get ready for the trail riding season.

Some of my other, "English", friends had a laugh about that phrase, though. They were like Western is Western and Dressage is well, Dressage--and the two ne'er shall meet--or something like that. (They were just kidding).

Of course, there are real differences in the two, as we all know--like I spent $2,000 for my trail horse and the Grand Prix Level Dressage rider down the road spent $200,000 for hers. And other differences as well--such as our saddles, stirrups, bits, reins, and riding techniques. Maybe the biggest difference in technique is that I use what we call neck reining--I lay the rein on the side of my horses neck and he feels that small amount of pressure and turns his body away. Whereas, a dressage rider has contact with the horses mouth by use of a snaffle bit.

But the principles of dressage--the least amount of pressure for maximum result, are the same in any discipline. We want to keep our horses eager and responsive, not dull and hard-mouthed.

The emphasis in dressage is on you, the rider. I found out on day one that I have a slouchy back. I spent many hours against the wall and on the floor trying to bring the small of my back level.

And you use your body in ways it's not used to being used--the shift of your torso, the balance of your center (as one English friend compared it to a gyroscope), the pressure of your legs, the weight of your body when you sit back to ask for a stop, the movement of your hips forward to signal gait changes, and the circle you make with your hips to keep them in a smoothe lope--all of these seemingly little things your horse can pick up, but that he/she has begun to ignore because they are either NOT used, or used incorrectly.

However, after I stopped the lessons for the season and went back out on the trail, I rarely used any of my new found skills. I think it's time to start up again and get a refresher--and I want to work on jumping.

Last year on the trail Cowboy put me in a couple of uncomfortable situations when he, at the last moment, decided to jump, once, a log, and once, water. Oh, and he also leapt over a rock and onto a ledge. This is a tough thing to figure out with your horse--how much to hold them back (which sometimes makes them back up) and how much to let them go (which sometimes they take advantage of and use the head way you give them to leap.) This hasn't gone away 100 percent in the 6 years I've had Cowboy. Ninety-nine percent of the time he does what's right, but one percent of the time he doesn't. And, it's up to me to sit it correctly.

If you've ever had your horse jump when you're not ready, you will remember the POWER it takes for them to thrust their 1200 pound bodies into the air over an object. The power, the forward thrust they use, requires a push off, which instead of sending you forward, will send you off the back. However, if you sit forward, like you expect them to jump, it's also asking them to do so. Hmmmmm....

This is what you should look like when you're prepared: 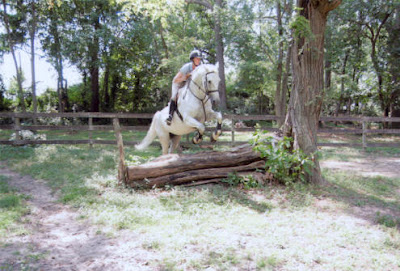 So, these are things I want to work on. Cowboy is a backer--a bad, bad backer. Because he's a spooky horse I always have to go forward, forward, forward or he'll back up to China. His mental conformation doesn't allow much time to think about things--you have to keep it moving. The more he moves, the better he does. If you try to hold him back too much he will do the jig, and let me tell you, he can jig for hours. It's quite pretty, but personally, I hate it.

Every Spring, we start out with the jig until I've had some trail time on him and worked it off. The Fishtrap Poker ride last year? He jigged the whole way. I'd probably need to get out there early and run him through it once and then start the ride again. All the horses, the good weather, he gets nutty---and he forgets that he's a dumpy old Paint and thinks that he's Secretariat instead.

My goal this year is to work on his going forward, walking over objects, standing in water (which he hates), and standing patiently when I hold him back.

My goals for me are getting my jump seat, so that I'm prepared for anything, learning to communicate more confidence to Cowboy, and spending more time in the saddle with him, even if it's just lolly-gagging around the house here for hours.

Hey, I just had an idea--I should have my husband build me a hitching post in my yard. I could ride him back and forth from the barn all day. He'd get lots of practice being an obedient tied up boy and lots of time in the saddle. Hmmmm....
Posted by Linda at 8:40 AM