The Value of An Older Horse

Since the weather isn't the greatest, and I'm not out working with Beautiful as much, I thought it would be fun to write about each of the horses in our herd and the themes that each brings up. 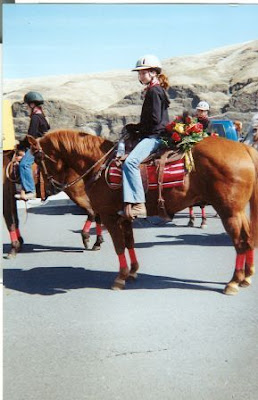 We bought Red for our daughter when she was learning to ride. He'd been recommended by our farrier and our trainer as a rock solid, awesome horse. Of course, he was 21 at the time--but they assured us that this horse would do everything we needed and give Shiloh the confidence and horsemanship skills she could take with her to the next horse. 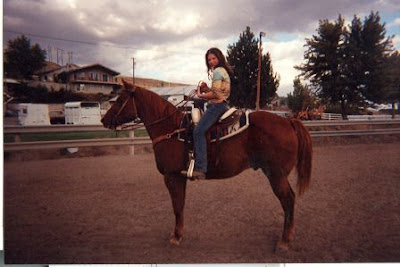 We went to see Red--he was for sale for $1,200 at the time. The woman who owned him couldn't speak highly enough of all he'd done--both in 4-H and helping the handicapped with therapeutic rides. She saddled him and we tested him out--bought him immediately.

Red's quirky history: He was a ranch horse for most of his life--owned by a "playboy" rancher from Lewiston, ID--whatever that means. He would take his dates to the ranch--and he'd let them ride Red--who, even at a young age, was always safe and obedient.

That part of his history, as it was told to us, has always made me sad--although maybe it should be funny--but it implies a certain amount of disrespect to both horse and rider. I've never had anything except respect for this horse. 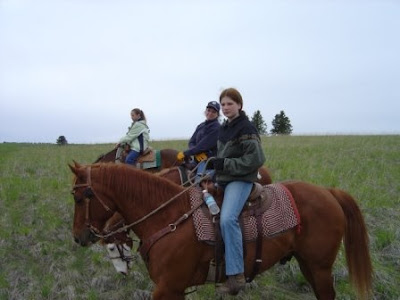 Now, other people, some friends of ours, had looked at him and passed, and one friend in particular teased us that their young ones would be around long after old Red was in the grave....hmmmm... 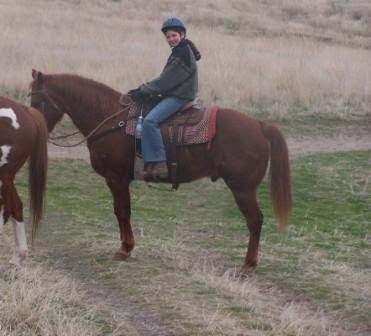 I've watched many a kid go saillllllling through the air on their green horses, but Shiloh, in all these years, through Red, Shadow and a green filly, has never hit the ground! 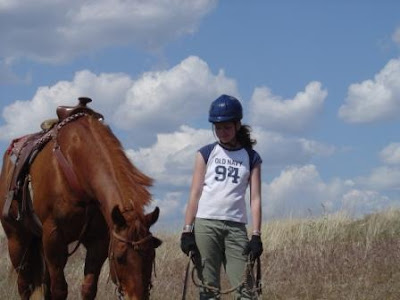 Trail ride after trail ride--4-H--parades--Shiloh built up her confidence and love of horses, and eventually moved over to Red's white twin, Shadow in the picture with him here last week--and then on to her green filly, Cowgirl.

Another quirky part of Red's history: He was a horse who did what he was told--and that was it. Where some horses showed curiosity--playfulness--this wasn't a characteristic of Red. He had a natural inclination to protect Shiloh, but he was a horse who had been trained to do a job--obviously by a man who didn't believe in horses as "pets." (We were his third owners.)

When we bought him--I always felt it was like we'd bought a slave. He'd stand out at the end of his run and look back up the road toward the property where we'd purchased him. I never felt good about it. I'd talk to him--stand with him--pet on him--but he'd stand looking away--obediently.

When his second owner had left after dropping him off--he whinnied out for her for a long time--but she cried all the way back to the truck and quickly pulled out--before she changed her mind. Selling him broke her heart.

Years later, I raised a colt--Sonny--full of personality and life--he was a twin to my Cowboy--and a nephew. But it was Red who did the caretaking of Sonny--Cowboy just wanted to beat him up (He's an insecure Omega). Red and Sonny bonded like father and son (Red is a nurturer of younger horses).

About a year and half ago, when we moved up here, Sonny coliced and died. I was broken-hearted about it. At night, I'd go and stand out in the dark where Sonny had stood--and look and smell and see what he saw---and miss him.

During one of those nights, Red came to me--for the first time ever on his own--and he allowed me to pet him--and he sniffed me (a sign of acceptance for a horse) and nudged at me. It was the first bit of affection he'd ever shown to me in the many years we'd "owned" him. We've remained real friends ever since that night.

Red is my example of loyalty and survival. 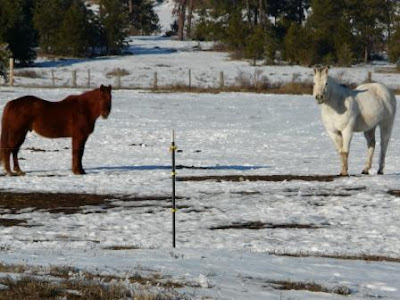 All of which leads me to ponder the value of the older horses. I think every herd should have one. They are a safe and steady mount for visitors, grandchildren (in our case), and the best babysitters ever.

Also, I think the well-conformed ones with the good minds, like Red, live longer. Everyone's always said, one day we'll go out and find him dead--and sure enough, many of the old horses we know have passed on. But not Red....not yet!

We've gotten all of these years of solid riding out of him and he has never had ONE injury or sickness. Not one. He's an easy keeper, even at his age--just alfalfa and a scoop of Allegra in the winter.

So, here's my list of why you should consider older horses:

1. They set the mood for your herd.
2. They train the young ones.
3. They're good to learn on.
4. They're dependable with green riders.

I imagine there are some honery ones--or ones whose arthritis and other health issues would make it difficult to ride them--but if they're sound and well-trained--they're worth their weight in gold.

What does everyone else think about the value of an older horse?
Posted by Linda at 3:25 PM