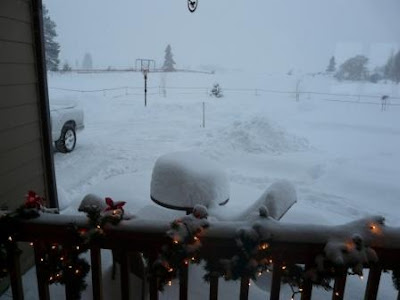 This is what lots of snow looks like here in Spokane. I don't know our exact count in a 24 hour period, but we were in line to beat the all time record--I bet we got 15" or more! We're going to get a lot more today--maybe over 2 feet before this is over--maybe 3!! (Does anyone know our exact count?) Update: Spokane International Airport had 19.4 inches of snow at daybreak, easily eclipsing the 24-hour snowfall record of 13 inches on Jan. 6 and 7, 1950.

Did I bring the snow with me when I moved here?? I've always LOVED snow--remembering back to the snow in Maine that began in October and didn't leave until April--so maybe it's me. (My apologies to those in Spokane who don't love snow as much as I do).

It's like a blizzard out there and the snow plows can't keep up. Of course, schools are closed and the kids are happy--SNOW DAY!!! They'll be pulling out the sleds and snowboards to go out and play with the other neighborhood kids!! Traffic can't run on our street--we're on a dirt road and rarely get plowed--so all the kids use the hill for sledding.

BTW: If you're snowed in with nothing better to do--check out some of the giveaways going on at my mom's blog Serenity Gate--and Two Appaloosas and a Mustang and maybe Andrea's site--Mustang Saga though she might done, you'll just have to check it out. 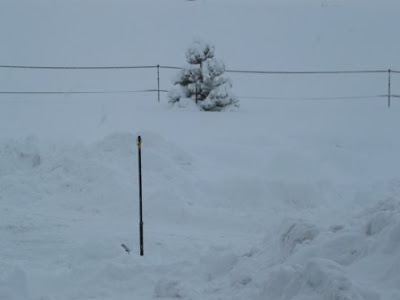 My little pine tree, all covered up! 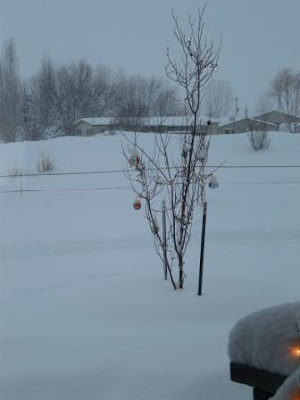 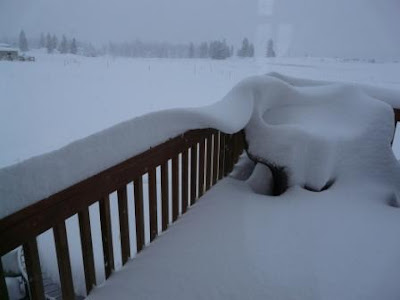 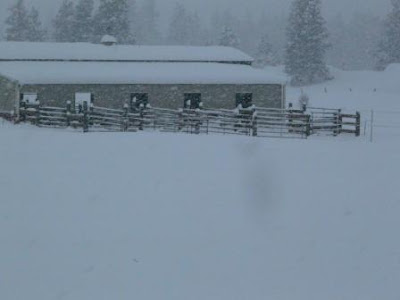 Barn--I'm a little worried about the snow load for that roof. 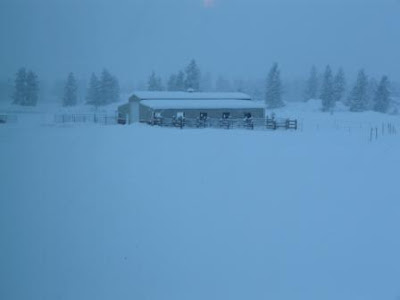 They say this snow is dry and light because of the low temps--I hope it doesn't stress the roof. 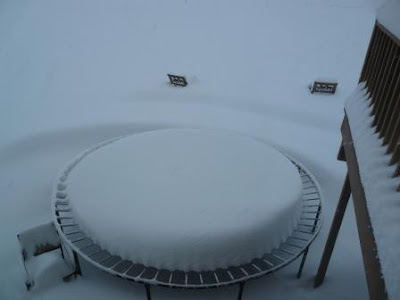 Here's the kid's trampoline and a couple of chairs we should have brought in before they got snow covered!

Here's some information from a Spokesman Review Article that ran today--follow the link to see the whole article and more pictures: 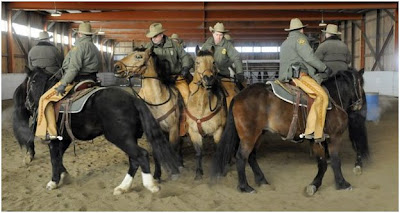 Memorable quotes from Jim Camden's Report--Go to their site to view whole article and more pictures of their training.

Asked how he chose the horses that will go--Lee Pinkerton says it had less to do with looks and more to do with their temperament:

“Pageantry is part of it,” Pinkerton said as he watched Border Patrol wranglers work the agency’s 16 mustangs in an indoor practice facility south of Colville. But these aren’t quarter horses or Clydesdales, and there’s no standard for the perfect mustang.....

That’s pretty much the point of having mustangs as part of the celebration, he added. “These horses are throwaways. They’re outcasts, just like many people who came to America were.”....

Just think of it, these are horses that were running wild two years ago, and next month we’re taking them to the most powerful city on Earth,” said Pinkerton, the assistant chief patrol agent of the Spokane District, who can wax poetic when talking about a program he helped start. “That’s a pretty short time to go from some of the wildest places in the country to a concrete jungle.”.....

Two years ago, Pinkerton and Dick Graham, patrol agent in charge of the Oroville station, were discussing what kind of horses the agency should buy to increase its horse patrols. All of the horses were from domestic stock at the time, and many were leased under contract.

“We said, ‘What breed best suits what we do?’ ” Graham recalled. They talked about Appaloosas, because that breed originated on the Palouse, which is part of the district. But they were expensive.

Then they considered the mustangs in BLM’s adopt-a-horse program. They were more affordable, at $125 to the BLM and $900 for the training, compared to about $3,000 for a domestically raised horse at the time. The mustangs also were rugged, with big bones and heavy feet, Graham said.

Joe McCraw, a senior patrol agent and wrangler at the Border Patrol’s Colville station, recalls his reaction when Pinkerton first suggested the mustangs.

“I thought he was crazy,” McCraw said this week while sitting atop a buckskin mustang named Zeus. He thought they might be wild and unpredictable. But after two years of working and riding them on rough terrain, he’s sold on mustangs for patrol work.....

Pinkerton jokes that the mustangs are more like pets than work horses. Ride a domesticated horse all day and take off its saddle, it will likely run away, glad to be shed of you; do the same with one of their mustangs and it will hang around and wait for you, he said.
Posted by Linda at 7:49 AM