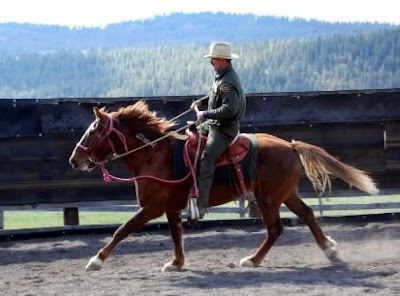 Senior U.S. Border Patrol agent Joe McCraw works with Slash, a wild horse recently adopted by the agency to help on backcountry patrols, in Colville. Eight mustangs will be deployed in June to help the agency patrol rugged stretches of the border from Glacier National Park in western Montana to the Pasayten Wilderness in central Washington. The wild horses have received special training for their mission.


From the Spokesman Review Article link (More links at bottom of the page.)

Senior U.S. Border Patrol agent Joe McCraw works with Slash, a wild horse recently adopted by the agency to help on backcountry patrols, in Colville. Eight mustangs will be deployed in June to help the agency patrol rugged stretches of the border from Glacier National Park in western Montana to the Pasayten Wilderness in central Washington. The wild horses have received special training for their mission.

Mustangs that were running wild less than two years ago will be part of next month’s inaugural parade for Barack Obama.

The formerly wild horses are part of the U.S. Border Patrol’s mounted unit, which operates out of Colville, Metaline Falls and other Inland Northwest locations. The unit received an invitation to bring eight of its mustangs to Washington, D.C., next month to march in the parade with the agency’s honor guard and bagpipe and drum team.

For the unit, the invitation represents a chance to show off a successful program that blends environmentally friendly practices and criminal rehabilitation. For the horses, it represents a long journey from running wild on federal land to marching down the broad avenues of the nation’s capital.

The agency adopts horses captured and auctioned by the U.S. Bureau of Land Management for $125, then has them trained by inmates in a rehabilitation program with the Colorado state prison system at a cost of about $900 each.

“We think that not only did they tame the horses, the horses tame them,” Suarez said.

The horses are then sent to Border Patrol stations in the Spokane Sector, which covers Eastern Washington, North Idaho and Western Montana.

“It’s some of the most rugged and remote areas of all of North America,” Suarez said.

The horses can get into some back-country areas more quickly and economically than motorized vehicles. In areas such as Glacier National Park, which restricts motor vehicles, horse patrols are used to minimize environmental damage.

The agency currently has 17 horses that are stationed across the northern tier. Other towns include Curlew and Oroville, Wash., and Eureka and White Fish, Mont.

Horses from the sector have marched in Chicago’s St. Patrick’s Day and Spokane’s Lilac Parade. The agency hasn’t picked which eight horses it will send to Washington, D.C., yet, but staff is expected to do that in the next few days and begin training them.

For horses that spend most of their time in the back country, they need to get accustomed to walking on paved streets, with potholes, Suarez said. They also will get acclimated to crowds.

Preliminary plans call for them to train in Colville, and be shipped in trailers to Washington, D.C., in mid-January.

The biggest logistical challenge will probably not involve the horses, but their riders and handlers, Suarez said.

Parade organizers have made arrangements for all equestrian units to be boarded in Maryland, Suarez said. Their riders are on their own, and lodging is getting scarce for what’s expected to be a heavily attended inaugural celebration.

“We’re just happy to be in the parade,” she said. “We’ll stay anywhere.”

Article from the CBS Evening news
Posted by Linda at 12:32 PM