Another Day with the Farrier 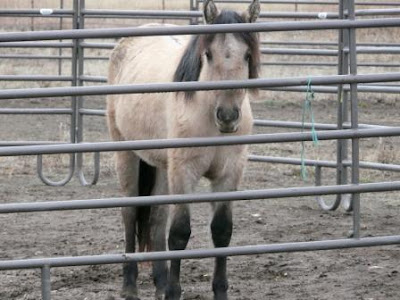 Beautiful looking at me. I tried to get her to keep doing what she was doing, which was running around bucking and playing, but when she saw me with the camera, she stopped and paid attention--like she always does. 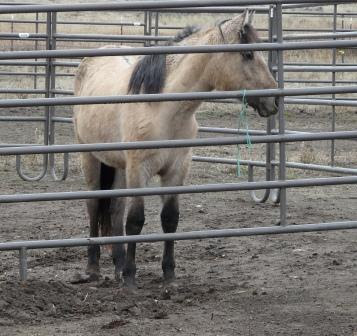 Here she is looking at the other horses in the pasture who had just been released. They were running back and forth over about five acres, rearing, kicking at each other and having fun. Beautiful had gotten in on it, too. She is so much more tuned into them now that they're in the barn more. They also pay more attention to her. She's getting ready to join their herd and somehow, I get the feeling she's going to give them all a run for their money. She's smart--Better keep an eye on that one!! 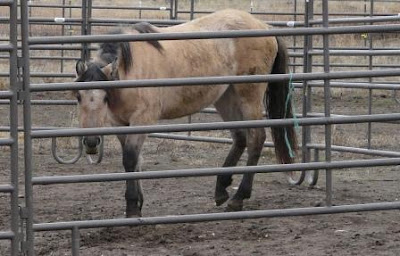 Here she is checking me out again. Her run is now 48x36--but we're going to expand that even more. She has developed more coordination already just by expanding it that much. It gives her more room to run and play. 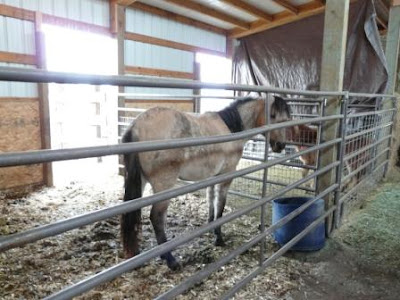 This is right before the farrier and before she was groomed and before her stall was cleaned. 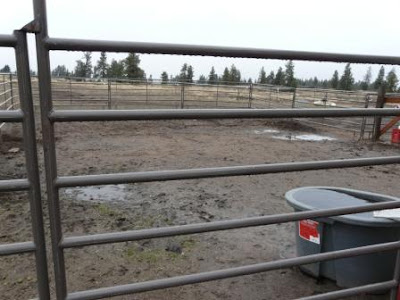 This is what I have to look forward to every day. Mud. Ick. Yuck.

Well, another farrier appointment. I always report on these because they're so important to me. We trimmed her in the 12x12 stall this time and got all four hooves. She didn't want to give him her back right--as usual. He said this is the common one they have problems with--they call it the racehorse foot or something like that--because no one want to work with that side.

She is STUBBORN. She was going to go to war with him over that hoof. I had to keep moving her back in the original position. At some point she finally decided she wasn't going to get away with it, started licking her lips (a sign of acceptance) and settled down. I'm happy to report, she never tried to kick him, though I was pretty sure she was going to. After he petted her and left the stall she kept a real close eye on him for a couple of minutes, then put her head onto my arm like, Sorry, mom--I overreacted.

My farrier is switching us to an every month schedule now. He's going to do half of the horses each time and work with the Mustang and Cia a little bit every time he comes. He won't charge me for the little nips and tucks he takes on those two in between trims, but he feels it will help them over all, and him, too, to have more maintenance.

It will also help our pocket book. Trims are $40.00 per horse, so each visit was around $280.00-$350.00 (depending on if Cowboy needed shoes). That was a lot to pay in one lump sum. This will make the psychological aspect of writing the checks much easier. Ha ha.