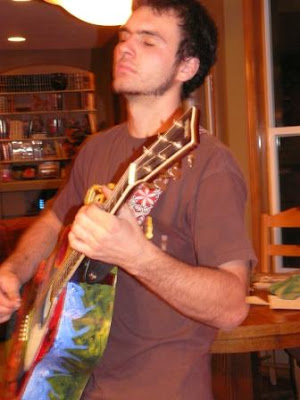 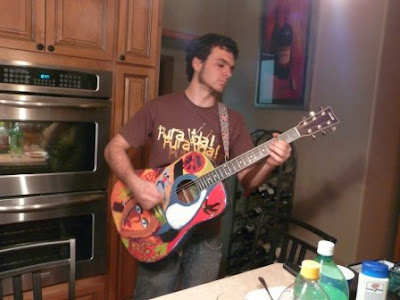 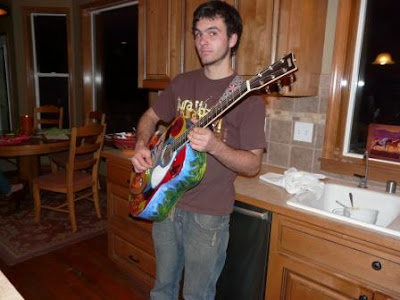 Yesterday, Halloween, my oldest son, Brook, came to town for a short visit. He's a young man whose energy fills up a house as soon as he walks through the door. If he was a horse, he'd most certainly be a Mustang!

And, he's busting out of the seams with creativity--serenading me with his songs upstairs, downstairs, in the Living Room, in the kitchen--singing, strumming--beautiful music--full of passion.
I treasure those moments.

Four years ago, when Brook was fourteen, he went to live with his dad in Montana. That was a tough loss for me, and maybe one of the reasons I chose some "hard-case" horses recently.

As a mother, you expect to be with your children in minutes, hours, days, months--that ever-present relationship it's easy to take for granted, but combined, is what "motherhood" is all about.
Instead, for the last four years, I mothered him in moments. I might have a week here, a day there, a summer here, a Christmas there--moments--mourning the day to day life I'd lost with him--but happy for what I could get.
The horses helped distract from the loss.
I remember my farrier saying to me the first time I really got to pet Beautiful--when she trusted me enough to stand there for a long time--he said, "You're probably the first one to do that since her mother."

It makes me think about raising teens--when their will to be independent temporarily breaks the maternal bonds--makes your relationship so tenuous. A sort of dance starts--much like when you're working a Mustang in a pen--trying not to get kicked, trying to let it know it has its space, and room to get away--yet trying to touch it and let it know you're there to be its friend--helper. Except the work with the teen goes on for years, whereas the initial roundpenning with the horse is over in days.
The guitar in the picture is one I bought for him one of the times I said good-bye. He had taken violin lessons from the time he was a young boy--progressing through the 1/8, 1/4, 1/2 and eventually a full size violin. But in his teens, he transitioned to electric guitar---which was LOUD and impractical to use too often.
He had so much music in him--I thought--if I can give him anything to take my place in this time of life, what would it be?

And, then I thought--his opportunity to play his songs. I thought his creativity, if nurtured, could see him through the tough times he'd face--and maybe, just maybe, bring him safely to the other side.
Well, so far, he's safely to the other side--and that guitar has provided him no end of comfort and joy.
Two months ago he painted it--the story of his life--his struggles and temptations--his detours--many things are depicted there. And, me, I'm the woman's head that's painted on the front.
Good or bad, I'm part of his music--and he's certainly part of mine.
Posted by Linda at 12:01 PM