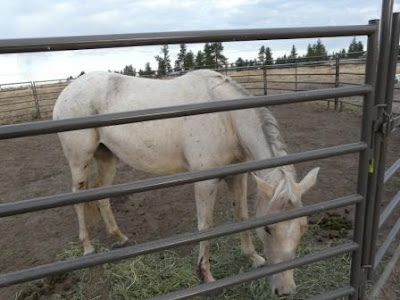 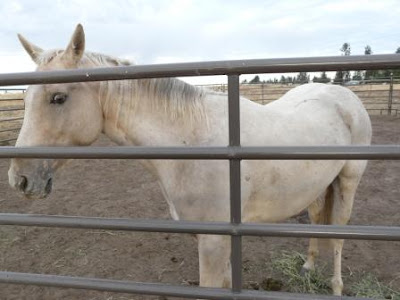 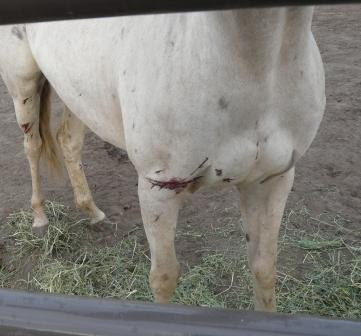 Not one of ours, I assure you, but the cause of much late-night excitement around here. A runaway.

When a horse escapes in these parts, I have two fears:

1.) This land used to belong to a dairy--over 1000 acres of cows and barbed wire. When they sold off the lots, much of the barbed wire remained or had fallen and embedded itself into the ground. This wire is impossible for horses to see at night in a wild-runaway panic. Often they run through it and get caught--ripping open their chests or their leg tendons. In one case a friend of mine's colt slit open its throat and bled to death.

2.) A busy Highway--many people call the highway around here a freeway, because there's so much traffic. A friend of mine who worked at an equestrian center near it had two of her horses runaway and make it up there. They were both hit by cars and put down on the spot. When we first bought this house, our horses were confused about the fence line and broke through it. They ended up one block away from the Highway at another equestrian's home--eating the grass in her backyard.
Some lose sleep over the stock market--I lose sleep over the Hwy and my horses.

Last night, before leaving the barn and our horses--somewhere around 10:00 pm., I had an uneasy feeling. We had just finished the runs off the barn and rerouted the fence around the barnyard. I kept two horses in the barn, as I always do, so that if any horses break out, they would want to return to the barn to be with their buddies.

But one of our fillies, who was out, acted more excited and high-strung than the others. She ran around charging the fence and in and out of the open stalls.

I asked my husband to help me put up one more gate in the dark, which he did. I thought, if anything happens tonight, this isn't a good time for her to be wound up with new pasture borders.

We left the two old geldings in the open pasture and went back to the house to go to bed.

I was in deep sleep when at 1:00 am, my daughter ran to our door yelling the words horse-owners always dread, "The horses are out!!"

I jumped up so quick, my husband and I scrambling around in the dark for clothes and the light switch--me speaking jibberish in my half-asleep-panic--and out I ran behind my daughter-- followed by my husband.

"Cowboy's out--I saw him at the barn." My daughter shouted to me, but as I ran toward the barn, I saw clearly by the barn light that Cowboy, Cia, and Cowgirl where exactly where they should be--in the new stall runs.

When I realized we had a guest, everything changed. A new horse is an unknown.

I went to the barn and got halters and leads and we contained our own horses who were at high alert over the fence. The new horse ran toward them and you could see the electric shock from the fence light up in the dark night--and the horse snorted and ran back. She was scared and wanted to be by other horses.

Our horses wanted to protect themselves, but they were curious, too.

After returning them to the barn, I went back to the pasture where my daughter and husband were trying to coax the mare into the round pen with grain. Shiloh managed to get a halter and lead rope around her, but the mare panicked and swung her butt around to kick Shiloh, and she dropped the rope.

In a second she had it back and was trying to lead her to the pen where I entered with hay. The darkness worked against us. We were shadows and noise to her, and she was frightened and appeared to be young and ill-trained.

All three of us managed to get her in with my husband doing a big round circle behind her to get her moving through the gate.

We went to bed and didn't have the chance to see her until daybreak. She's cut up from barbed wire and still scared. I've been giving her food and water and trying to get her to calm down enough to doctor the cuts.

No one has claimed her yet.

This is what I can deduct from what I've seen.

1.) She belongs to a young lady--maybe college aged--because her mane has been braided--that's definitely a "girl" thing.

2.) She appears to be a young appaloosa because she isn't well-trained, she's easily spooked, and she's lean and healthy like she's never foaled. She also has spots on her hind.

3.) She is owned by a young girl who's going to college. (Here I'm stretching it.) But there hasn't been a call in that she's missing yet and it's almost 9:00 am. College kids are notorious for sleeping in and feeding their horses late--as I was when I was in college. Takes one to know one, as they say.

4.) She's boarding her out at a new place--which is why the mare broke the fence and got disoriented and is looking for a herd mate. And, that would be another reason why she doesn't know yet that she's gone.

Okay, just got the call from the police. She's owned by a guy. Bummer. I'll find out more later--I bet it's his daughter's horse!
Update:
I got the call from the owner, and yes, it is a guy, but it's his daughter's horse!
Apparently, they bought her five days ago and this is the second time she broke out. She's from up by Lake Roosevelt and is five years old. She was born on a ranch and ran with her herd the whole time. She is just now being halter broke. In fact, yesterday was the first time they'd tried it. (We were lucky to have caught and contained her). They are keeping her on a friend's property by herself, but are going to get a herd mate for her this weekend. I could be wrong, but sounds like they're new to horses. I'll find out more when they come to pick her up this evening.
Posted by Linda at 8:22 AM