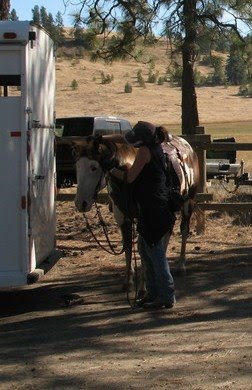 It's amazing to me that fall is not spring since it seems that in fall you really come to life. The weather is perfect. But instead of everything else coming to life, the plants, trees, grass--it is on the verge of going dormant--another beautiful transition--in my opinion.

So, maybe fall is the human version of spring. Hmmm...

Today I went on a gorgeous trailride at a friend's barn--up in the Hangman Creek area. The horses were end-of-summer-lazy--if you know what I mean. Basically, their get up and go, got up and went about two months ago.

I kicked Cowboy up a freshly plowed hill at a lope. In spring he'd be bounding up that same hill--but the last day of September, he just wanted to turn around and walk home. His run was was ho-hum, at best--I'm not sure which music you'd play to it--not the Lone Ranger's theme, but maybe the Beatle's "Yesterday".

But what a great day to be lazy, meander through the woods and chat.

Apparently, there had been a moose through that same spot of wood earlier. We didn't think to ask whether it was a cow or, um, "boy" moose. However, we were told after the ride that we should have because the boys are mean in the fall.

Funny, but when we entered the area where the moose had been seen earlier, the horses did get unusually alert. They aren't afraid of wildlife--since during most evenings they share the pastures with deer, but they do perk up at new arrivals--and there appeared to be a new arrival, though we couldn't see it. (At the top of that clearing, we ran into another rider who told us the moose had been spotted there earlier.)

Oh, ignorance is bliss, isn't it?

Well, there's not much else horsey to report today. Tomorrow we'll be doing another trail ride--maybe two, if I'm lucky, and probably clean stalls.

This is a good time at our ranch--everyone's happy and healthy and Beautiful has had all feet trimmed--the fronts several times now. I'll enjoy the lull while I can.