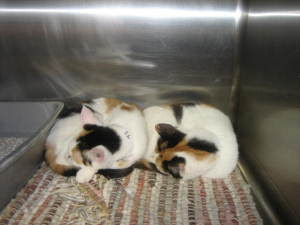 I know we talk a lot about horse rescue--but how about CAT rescue?

When I've been in my barn I've seen lots of MICE lately--so I realized I have a need for "BARN CATS."

As I looked down I found #1 & #42--sisters sleeping together-and I got right on the phone to see if they were still there. Sure enough, they were and they wanted them to stay together.

I adopted them over the phone and I'm going to pick them up tonight after 5:00.

They have many more cats in need of homes that were seized from a cat "hoarder"-- apparently some were in bad condition, but doing much better now. Because of this, they gave me the two sisters for $52.00 which included spaying, rabies, vaccinations, micro-chip, and license. They are usually $75.00 per cat. So, this was an awesome deal and I am just THRILLED to go pick up my new babies.

I'm going to keep them in a special tall cat-cage I have until they acclimate and then release them in the barn. Here is the information on the case from the Spokesman-Review:

An animal-hoarding investigation involving dozens of cats seized from a Spokane home last week is expected to be sent to the prosecutor's office today, according to SpokAnimal.

The target of the investigation is a longtime cat advocate. Penny McIntosh works with several cat rescue shelters and obtained most of the 85 cats seized Friday at her home at 2812 W. Sharp Ave. through the rescues, said Gail Mackie, SpokAnimal executive director. All but one of the felines had health problems that seemed to clear up when removed from the home, Mackie said.

Officials sent four seized dogs to foster homes, four of the cats to the original rescue organization and one back to its owner, who Mackie said was having McIntosh care for it. An unknown number of cat carcasses have yet to be removed from the home, where conditions were "deplorable," Mackie said.